The warmth and humor of the Nepali people are among my best memories from traveling through Nepal and volunteering there. Across my two months there, Amrit, the man overseeing my guesthouse during my volunteer experience, became one of my favorite new friends. Driven and charismatic, he also exudes optimism. His happy dispositions settles deep into your soul and you can feel like fast friends with Amrit.

Amrit’s uncle, Barbajuan owned Family Guesthouse (and just about everything in Pharping). Amrit lived at the guesthouse and acted as the “den-mom” for the volunteers living at the guesthouse. Our first days in Pharping will forever be shaped in my memory by Amrit’s joyfulness. Although we had some problems with VSSN, Amrit’s welcome was instant and genuine, and he found many opportunities to share with us his infectious laugh.

For the first week of our stay at the guesthouse, Amrit handled everything from cooking to overseeing our time in Pharping. After that, Carna returned from his village and took over the cooking. With Carna and Amrit presiding over the guesthouse, our meals became a constant source of gusting laughter and cheeky stories of their life and experiences, and what it meant to be a 20-something in Nepal.

Although I am not the most fashionable person in the world, Carna opened my eyes to the trends and times around me in Pharping. Carna seemed hip with the local trends — he wore trendy Western-style clothes and always sported the latest in Nepali fashion. One day, as he served dinner, I noticed a series of band-aids stuck to the bottom on his shirt. The placement appeared deliberate and even artful. When asked, Carna explained that band-aids are hip right now, but only when you wear them on your clothing in a creative pattern. Over the coming weeks I would notice that crosses and exes were  most popular, though if the wearer designed a more elaborate pattern they got mad props. Carna himself evolved with the trend. The band-aids steadily migrated across Carna’s clothes, moving from the hem of his long button-down shirt to the calf of his jeans, sometimes appearing suddenly on a pocket or hemline.

The trends are unique to Nepal, as I didn’t see any of these trends when backpacking through India for two months. I’ve noticed a few other interesting trends, including long gelled hair and long pinky fingernails. There’s a particular use for long nails in the U.S., and when I asked Amrit if the nail also indicated aspects of drug culture, he assured me that the Nepali youth are growing out one single two-inch long nail for fashion’s sake. It’s so normal and on-trend that several of the older monks at my monastery also sported the long-nail, although I didn’t spot any of them wearing band-aids on their clothes.

Coping with a Lack of Power

If the new friends and locals in Pharping were the highlight of living in the small village, then the country’s power situation was one of the tougher aspects. As one of the poorest countries in Asia, Nepal has some issues. And while many of those deal with human rights, tourism development, and a range of other things, the power situation undoubtedly exacerbates all of these issues. It’s a well known issue and one that has great possibilities considering the potential for hydroelectric power. But even in the many years since I visited, the power situation remains plagued with issues. During my initial three weeks in Nepal, the government allowed each region of the country eight non-consecutive hours of power a day, given in four hour blocks. But the kicker was that no one ever knew when the power company would activate the electricity.

Each day, electricity would run from either: 12 to four, four to eight, or eight to 12. Once the first block of power came on for the day, locals were relatively certain that it would come back on at the same time that evening. As an added bonus, since rainy season had just begun across Nepal, the power company gifted everyone with a few extra hours of power each week.

Suffice to say, I used my handy headlamp every day and was so happy that I took others’ advice and packed a powerful headlamp as a “just in case.” Turns out, it’s needed on round the world trips! It was invaluable when I camped in a treehouse in Laos. And during my months in Nepal, I carried this with me at all times from dusk until dawn. Well, I carried it at all times after that one time that I was caught sitting on a toilet in the pitch black darkness and my headlamp was on my nightstand.

Each evening all of the daily tasks most often took place by candlelight. I learned how to take a bucket shower by the tiny illumination of a small headlamp. My balancing skills allowed me to read a book by the glowing light of a dim candle without lighting the pages on fire!

Every day when I would walk to my monastery, one of the local Nepali men would share with me his favorite joke: What is the most romantic country on earth?

Nepal, because they treat their wives to candlelit dinners every night!

Ok, I know it’s corny! But this hunched-over-ancient-little old man would beckon me over to his morning perch on a rock wall and delight me with this joke. It’s a testament to his sincerity that I was able to listen to it with a grin on my face every day, and offer him a genuine chuckle each time I heard it. 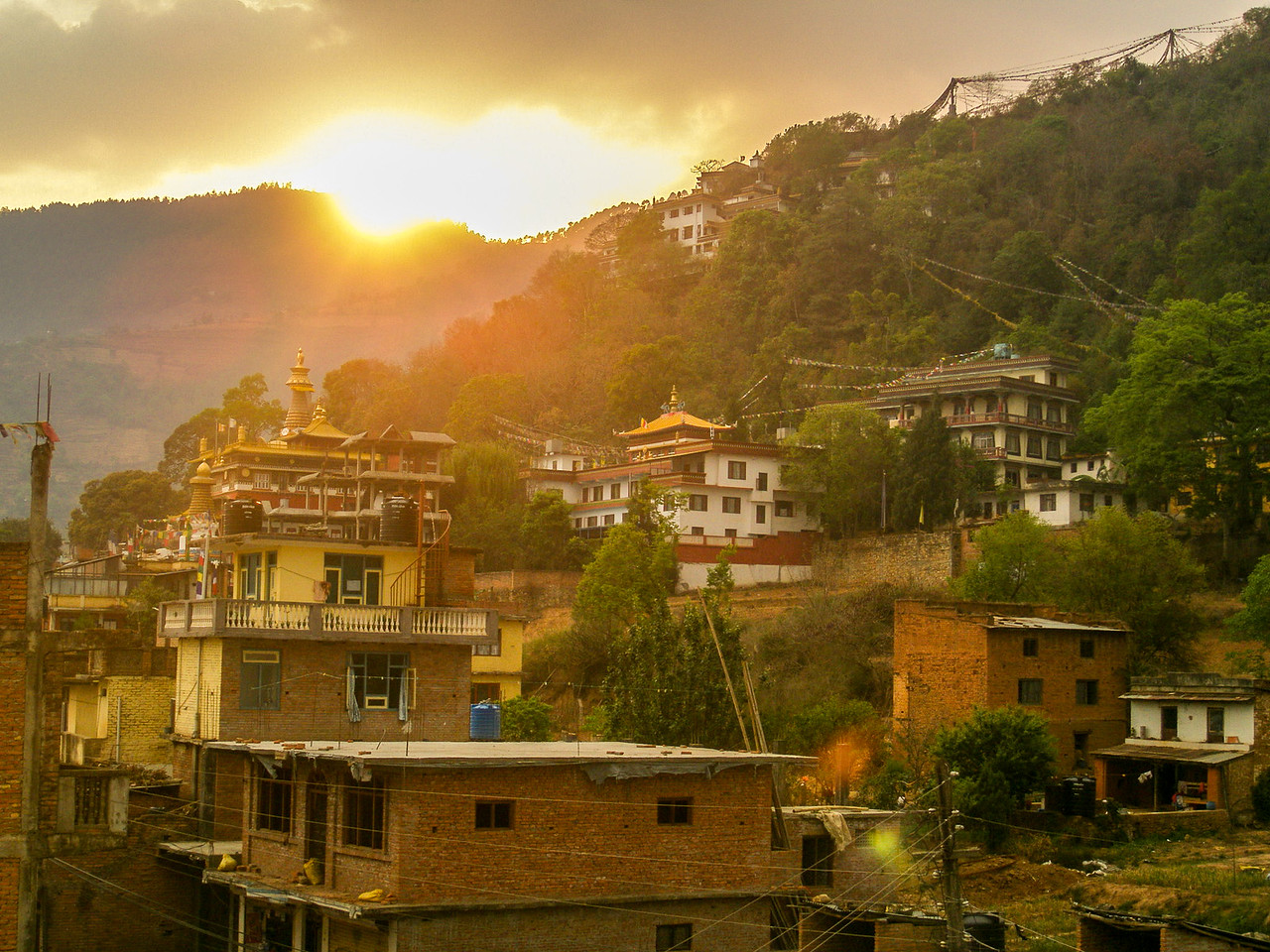 During my last few weeks in Nepal, the Indian government agreed to sell more power to the country. The government bumped up the national hours for electricity to 12 hours each day, instead of eight! That meant a lot to me as I attempted to work from the road and keep my client happy. But it meant even more to the locals.

Each day when the fluorescent light in my room flickered to life, greeting me with glorious illumination, I would snatch my laptop and scurry to the internet cafe three shops down from our guesthouse. I knew I’d have a couple hours to post my work, update my website, and furiously whirl my fingers over the keyboard in an effort to get as much done as humanly possible while the electricity lasted. Internet in the village was slow but inexpensive. At just 25 rupees an hour, roughly 40 cents, I would sit there for hours and sometimes even let the clock run while I talked to the very sweet shop owner. One wee little girl frequently played on the floor of the café while I was online. She sensed that am a sucker for children and each day she chanted didi at me, meaning big sister, and try to rope me into playing endless games of peek-a-boo with her.

Holidays have come and gone over the past seven months. Some passed unnoticed without Hallmark commercials to jog my memory. Others, however, made for interesting opportunities to create interesting new traditions and also adapt traditions to the current circumstances.  The other volunteers and I decided to celebrate Easter in our tiny Buddhist town. We bought eggs and asked Carna to them for us. He was confused when we insisted that we weren’t going to eat them, so he brought them to us with salt and silverware. Then we colored eggs with markers and nailpolish — we created a tiny celebration to mark the Easter holiday. Then, we treated ourselves to curd and honey for dessert and we ate our eggs for breakfast the next day.

For one of our birthdays we bought brown bread and taught Amrit and Carna the joys of French toast.

During the Nepali holidays, we joined Amrit and Carna on the top of a nearby hill and celebrated with food and pretty views.

Having settled in one spot for two months, it allowed us to slip into a lovely pace of life and learn more about ourselves and the local culture than could have been possible just passing through Nepal in a rush.

Heading to Nepal? Check out my full Nepal Travel guide, or pick up a copy of the best Nepali guidebook. And if you’re keen to volunteer, check out the independent volunteer opportunities on Grassroots Volunteering.