Are there any three words that are more indicative of London than the phrase “mind the gap?” Surely you could name drop the major sites, Big Ben, the London Eye, Westminster Abbey, but for anyone who’s actually been to London the incessant chant of “mind the gap” from the anonymous overhead voice brings me right back to the underground and my days spent exploring the city!

Having already done the London touristy sites during my college-era study abroad program, I decided to spend my days in London aiming for a more local feel, like I had done when exploring Amsterdam for several weeks during a housesit. My luck on the United Kingdom leg of this round the world trip is pretty fierce—I’ve met a lot of people along the way and have several house offers all throughout England and Scotland—I’m hoping that makes it all a bit more affordable.

So, although I only briefly mentioned Hannah at the time, I met Hannah while trekking the Annapurna Circuit in Nepal—remember the completely hazy, nary a mountain in site trek? Yes, well she was also blessed with the terrible choice of hiking dates and we bonded in Ghorepani over warm food, hot drinks, a roaring fire, and a mutual love for the Eurodance group Aqua (don’t judge me).

Hannah lives in Clapham Common and has a lovely flat with an extra room—perfect for a couch-crashing traveler. She recommended that I purchase an Oyster-card for my three days in the city and it was clearly the best way to get around! The card cost three pounds, but it’s refundable when you return it, and during your tim in London you can load it up with all the money you think you’ll use on underground and buses. This meant I had no fumbling at the door of the bus to count change, I was able to just breeze on and off. It’s also a bargain and a better deal in some cases than the multi-day tourist cards. I definitely recommend London-bound travelers buy an Oyster card when they arrive! As a budget backpacker, it was tips like this, as well as others that allowed me to effectively plan my backpacking trip through England and Scotland!

I spent one of my days in South Kensington at Hannah’s recommendation—the museums in London are free so I was able to wander in and out to my heart’s content. The Victoria and Albert is Hannah’s favorite museum, so I headed there I caught a neat exhibit called “Telling Tales.” I’m a nerd at heart thanks to my dad, so the Science Museum across the street was also a lot of fun; it’s aimed kids, but who isn’t a kid a heart, right? Hands-on exhibitions and short consumable facts made it a fun wander.

The museums are in a beautiful part of town, an area filled with whitewashed houses and picturesque flower boxes perched on the window sills. Wandering through the streets brought me to Hyde Park and the Victoria and Albert Memorial in Kensington Gardens. I decided to relax and soak in the environment, so I found a shady tree and read my book for several hours, taking in the vibe of locals and tourists also lounging in the ample green space. 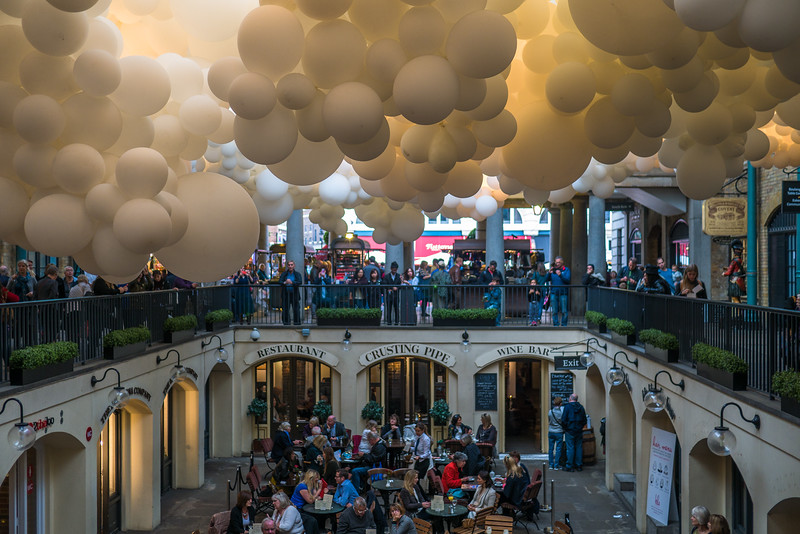 In search of vegetarian fare for lunch, I headed to the Covent Gardens area for a meal at Food for Thought, an iconic vegetarian restaurant in London that unfortunately shuttered its doors in 2015. The atmosphere at Covent Gardens was touristy-tastic—tons of street performers and the sounds of buskers wafted through the air. I dodged the many living statues, but it was good fun for a stroll and and window-shopping (since I am on a backpacker budget!

I capped off my time in London by sharing beers with two great guys I met in India during the craziness of Holi festivities—they were my street protection for the day! Remember these guys?! 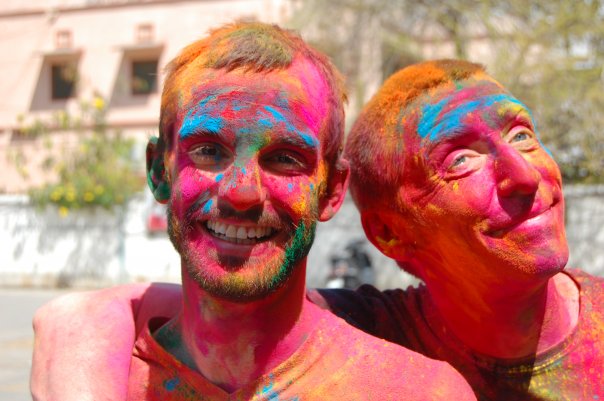 Neil and Jordi met me for drinks at a bar on Old Street in the apparently trendy side of town—Jordi works there and it was early enough in the evening that he was able to relax and chat for a couple of hours. I love these guys and it was so neat to have that connection of meeting genuinely nice people and making friendships that carry over outside of the crazy situations in which I met them. Heck, I’m surprised they even recognized me when I arrived considering the last they saw of me I was coated head-to-toe in the vibrant pinks, greens, and yellows of an Indian Holi experience.

For now, it’s a cheers and sincere thanks to my London friends—I didn’t see a single of the “major” sites in London this time around, but I had a brilliant time in the city. My next stop is the Lake District of England, and then further north into Scotland for some hiking and the Edinburgh Fringe Festival. I am at the tailend of this trip, but with a couple months yet, I am still hoping to meet up with friends from the year, and to enjoy every last second I have before heading home.