Exiting the bus station in Edinburgh, Scotland, the distant sounds of street music and cheering crowds lured me down Princes Street. Traffic bustled past me on the street, whizzing cars causing a passing breeze, and pedestrians vied for space on the sidewalk, eying me with caution since I had to backpacks strapped to my person. I had two hours to kill before my host for the next week would get off work, so that meant wandering the streets of Edinburgh in search of entertainment and grub.

Stepping foot in Edinburgh was a culminating moment for me—in high school, I dreamed of attending university in the city. I eventually abandoned that plan in favor of a full-ride to a state school (and a summer study abroad in Italy, so don’t feel too bad for me!). And years later, when August saw temperatures soaring in Los Angeles, when my acting friends and I baked in the city’s dry, desert heat—that’s when I dreamed big. We would all take a group trip Scotland with the sole purpose of binging on the myriad Fringe Festival shows that annually take over Edinburgh for the month of August.

What is Edinburgh Fringe Festival?

When I made the choice to take this RTW trip, I plotted my world trip itinerary with meticulous care. I etched Scotland onto the calendar in August as a non-negotiable. The Fringe has been an annual event in Scotland for more than 60 years and it’s the largest arts festival in the world. One of the biggest lures is the fact that it’s unjuried—that means anyone can take their show to the Fringe and no selection committee stifles the creativity of experimental theatre.

The city swells in size during August and Fringe madness takes over in more than 265 venues spread across the city. I wikipedia’d the Fringe and was amazed that this year there were roughly 1,300 performances taking place each of the 25 days of Fringe—holy crap! 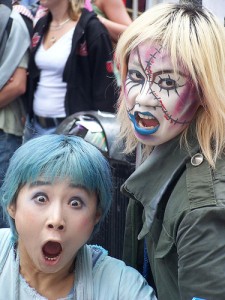 I lucked out majorly with free accommodation for the week with David, a Scottish guy who I met way back in Australia so many months ago. As a backpacker, spending any real time in Edinburgh is cost-prohibitive. Without the free stay, I would not have been able to stay for the full week. That being said, couchsurfing is huge during August and residents are accustomed to taking in poor souls desperate for Fringe fun—I had several offers of floor space around the city if David fell through.

Another stroke of luck? Connecting with Andy Hayes via twitter prior to arriving in Edinburgh. Andy had a press pass to the shows as a reviewer and my selection criteria for the shows was simple: I asked Andy which shows he would see again, if he could.

I took that mottled list of comedies, musicals, more musicals, theatrical drama, and a touch of risqué experimental dance and outlined my week of Fringe shows. Thanks to the generosity an acting friend from L.A. who donated to my RTW trip, I had an extra infusion of cash, and I plan to spin every extra dollar on show tickets. :)

Stay tuned this week for more pictures and fun stories from Fringe, the city, and an awesome Edinburgh Twitter coffee meet-up.