Once upon a time the main activity in Vang Vieng, Laos centered on tubing the Nam Song River and partying. In the years since the tubing scene was shut down, Vang Vieng has sprung back to life as an ecotourism hotspot. When I visited on my round the world trip, I partook in the tubing activities, I lunched at the organic farm, and I learned how to rock climb.

That’s right — I took formal lessons on rock climbing and then headed into the karst rocks around Vang Vieng to learn how to scale the side of a cliff! OK, perhaps not that dramatic — scaling a cliff is advanced for a newbie like me. Instead, we headed to a rock wall with a gentler incline with a few increasingly tricky routes to the top.

Vang Vieng is the prettiest spot I’ve yet visited in Southeast Asia. The town rests along a gently flowing river and sits among towering limestone karst rocks. Nearby caves and lagoons make for neat day trips. And although I considered kayaking the river, I just can’t seem to get warm here. I didn’t realize Laos in January was so cold. And so, adventures in rock climbing won out over another day on the pretty Nam Song River. From our rock climbing I should still have good views of the river and a chance to enjoy it from the shore.

Laura and I booked a full-day rock climbing course through Green Discovery, a well-respected ecotourism agency with tours and day trips throughout Laos. As Vang Vieng embraces ecotourism as their top form of tourism, there are an increasing number of options, but Green Discovery is a solid choice as they have been around for ages.

The day started with a quick tuk tuk ride out of town. We rode along the river for a bit, getting out past the backpacker sections of the river. Then we crossed the river in a local long-tail boat — those things are startling! As they zipped our small group across the river, I had to fight the urge to jerk myself upright since it felt like the boat would tip if anyone even sneezed.

One charming characteristic of a long-tail boat is the small bucket placed in near the boat driver — that allows him to scoop out water as the boat navigates the river!  I watched him chuck a bucket of water in the first 30 seconds and my heart contracted, I worried that I was facing yet another opportunity to drown my camera like I did in Australia last month! 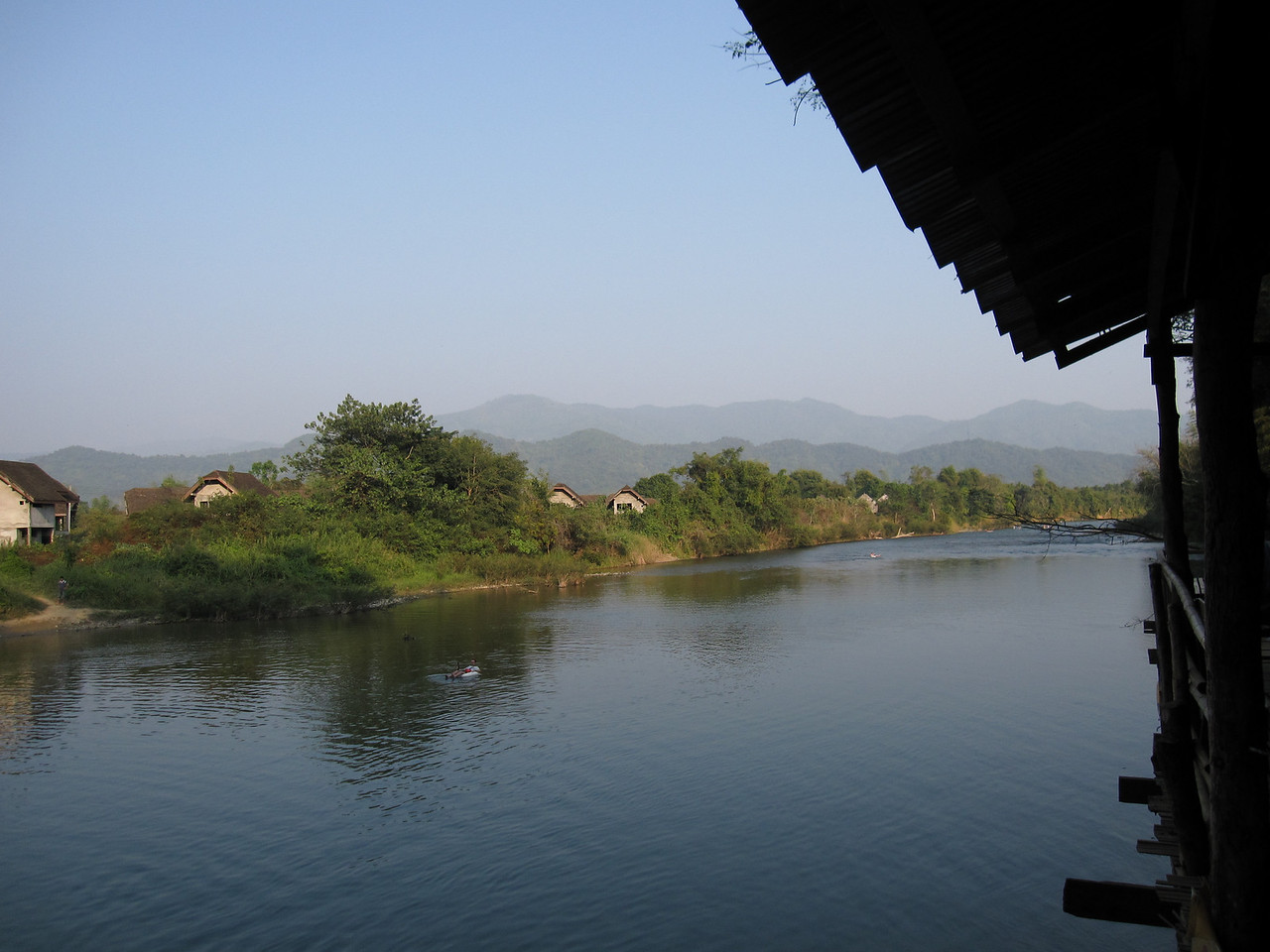 Once we made it safely to the far shore, the operators taught us how to suit up for a rock climbing adventure. They had already measured us for our harnesses and rock climbing shoes, so we just had to don our gear. The rock climbing shoes are a bit wonky. I was skeptical when I first put them on, but they work like a champ to grip tiny nubs and holes as I learned how to scale the rock walls. When we first arrived, our guides secured a line from the top of the wall. Then they guides focused on teaching our small group of six the footholds and grips that we would need to reach the top. No one made it to the top on the first go, and one woman in our group freaked out. Once she was high up the wall she began to panic at the height and she refused to let go and allow them to belay her down to the ground. One of the guides went up the wall to gently talk her down.

We made six different climbs and I am proud to say that I successfully made it to the top for four of the climbs.  Many of the climbs were on the beginner route, and then at the end they threw in a route that no beginner could complete. The climb has part where the climber has to navigate a part of the cliff-face that juts out several feet. The only way to pass is to dangle on one foothold. Though none of us made it, it was fun to attempt the climb and get a feel for some of the obstacles climbers face when they continue learning harder routes. 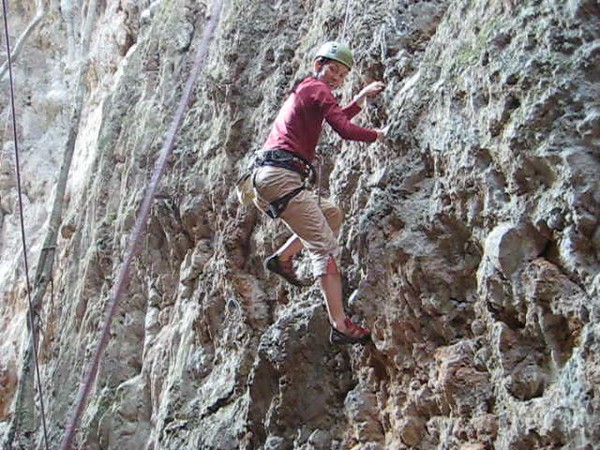 Once we completed three climbs the morning had slipped away. We had been climbing for several hours and my arms and legs felt like jelly. In college I had rock climbed in the gym and I had the same experience where my legs begin to vibrate with the strain. The few others who continued past their body’s breaking point ended up with big scrapes and bruises for their effort. I knew that I would get a second wave of energy after lunch and downtime.

The tour company accommodated my request for vegetarian food and I attacked my veggie shish kabob and rice wrapped in leaves. Although lunch was tasty, my favorite part of was the fresh sugarcane dessert. Our guide chopped down a stalk of sugarcane for each of us, peeled it with the knife, and then we nawed on the fibers to extract the juice. I had never tried fresh sugarcane before and I loved every second of this refreshing treat. Surprisingly, it has a mild sweetness and it’s fun to suck the juice clean from the stalk.

After lunch, the guides deemed us trained and allowed us to attempt the harder climbs. Laura and I decided to add our own reward by “dinging” the carabiner at the top when we made it. Naturally, that soon became too lame and our group would chant “kiss the clip” on anyone who made it to the top of a difficult climb. In essence, we didn’t get credit for the climb unless we could kiss the highest carabiner.

Learning to rock climb in Laos was a wonderful choice. The location is pretty “wowzers” at the top of the climb. It’s a good motivation to make it to the top — that’s when I had sweeping views of the Nam Song river and the surrounding limestone cliffs.

By the day’s end, we were exhausted and everyone earned the free Beerlao our guides bought for us. It was such good fun and our tour guide was a riot. He had a great sense of humor and had a safety-first mentality that I appreciated. And while I will never become a pro rock climber, this is something I will definitely try somewhere else in the world.

Quick Tips: How to Go Rock Climbing in Laos

How to Organize: Green Discovery is a socially responsible company with great policies, including using local guides and insurance tourism dollars stay in the local economy. And the equipment is shipped in from overseas and meets international climbing criteria and standards.

What Else to Do: I wrote about other activities in Vang Vieng here. Consider tubing down the river with friends, or spend the day kayaking. Outside of town is a beautiful Blue Lagoon, as well as several interesting caves to explore (definitely visit the Lusi Cave).

What to Eat: The Organic Farm has delicious food and is well located on the Nam Song River. My Things to Do in Vang Vieng post shares a number of tasty spots in town.

Where to Stay: There are some beautiful properties on Airbnb if you’re traveling as a couple or family (or if you’re a mid-range solo traveler like me!). Additionally, consider traditional guesthouse options like Inthira Hotel or Ban Sabai Bungalows for something midrange to nice. If you’re on a tight budget there are a ton of options, Keosimoon Guesthouse is nice and well located, as is Sechaleunkham Guest House. (If you hate picking a place and never know which looks best, read my page on how I pick out my accommodation when I travel).

Insurance: If you’re doing a physically adventurous activity, make sure you have a travel insurance that covers rock climbing accidents since Laos is very rural and you will require transfer to Thailand in the event of a major medical emergency. This travel insurance review shares which companies I use and why I picked them.

I use the Lonely Planet guides pretty religiously and I recommend picking up the Laos guidebook before heading there. The guidebooks are a great way to learn a bit of history, easily navigate between cities, and understand the type of activities offered in each area.

5 thoughts on “A Little Adventure… Learning to Rock Climb in Vang Vieng, Laos”