I almost overlooked Guatemala’s sweetest little river; running through the south and emptying into the Caribbean Sea the Rio Dulce is actually incredibly beautiful and reminiscent of the swampy waters of the Everglades in Florida (my home-state for inquiring minds). Thankfully these rivers are void of the pesky American Alligator and instead perfectly tranquil to better ensure several days of relaxing dockside and canoeing myself around the narrow canals shooting off of the river like tree branches from a tree trunk. I really resisted my first few days relaxing on the Rio Dulce – I was behind in work and pre-research of my upcoming hostel promised free wifi (the Holy Grail for a freelancer). I was primed and ready to surrender several days of my travels to really plow through some work and play catch-up.

And then the woes (and often needed obstacles) of backpacking life intervened – all of the remote houses on this part of the lake were undergoing repairs on the main power lines every day from 8am until roughly 8pm. No power means just a few precious hours of laptop battery and zero hours of internet time during the day.

So I pouted to myself.

And I whined a little in my head.

And then I surrendered, plunked myself down on the couch in the communal deck/lounge area at my riverside hostel and quickly found myself drawn to a nearby group of three women backpackers (all friends) planning a trip to a nearby waterfall. Surrendering to the fact that my planned days of productivity were now negated I decided might as well explore the area–and traveling solo and all meant I latched on like an attention-starved puppy to the friendly group planning their waterfall trip for the next morning.

Finca el Paraiso is a volcanic hot springs fed waterfall and was my reward for taking a needed break. The incredibly hot waterfall flows into an icy cold river flowing perpendicular to the waterfall creating a bizarre experience of chilly river water, patches of pee-warm water (sorry for the image, but it’s true!) and truly burn-you-hot bursts of waterfall.  It took exploring but we did manage to find a cozy warm spot just next to the steaming falls relax and breathe in the clean air. 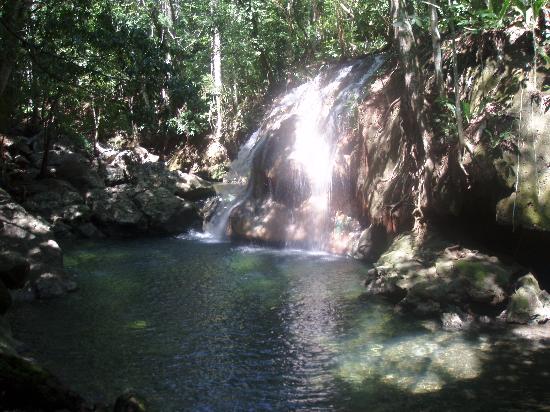 Our guide shared a locals tip with us we would have never tried on our own – if you are willing to dive under the low rock wall of the waterfall a  little nook hides big enough for all four of us.

But it sounded so appealing and group m entality won out so a quick (and incredibly shallow dive to be honest) put us right under a rock lip that had rushing sulfur water flowing down and thus created the perfect sulfur sauna.

It was actually incredible! Our guide was spot-on and we cleared our lungs and skin in the natural sauna for nearly an hour, ducking into the cold river water when the steam became oppressive (and sometimes it was the smell to be honest).

After surrendering to the experience and over the following days I spent several low-key and lovely afternoons embracing my forced technology-free days, what a rare treat!