It feels like just yesterday that I was fearful and a bit panicked about the prospect of traveling solo for a year. And yet, three months have passed and the experiences have been nothing I had anticipated beforehand. I loved my two months in Australia, but the real magic of this trip picked up when I arrived in Southeast Asia. Laos is among the most special countries I can imagine existing on earth. It captivated my heart. And although I wanted to hunker down and stay for years, I have to meet my cousin in India in just one week. And so I have just one week left. After visiting Siem Reap last week, we decided to finish out our time in Cambodia at a small orphanage about 30 minutes outside of Phnom Penh.

The orphanages in Cambodia have a truly awful reputation. It’s become big business for backpackers to pop into an orphanage for a few hours, hug some kids, and then move on with their trips. I was alarmed at the prospect of supporting something similarly shady. A friend of Laura’s had visited the Future Light Orphanage (FLO) the year before and he promised us that it’s not a canned orphanage experience meant only to pull tourist dollars from travelers, even if that means harmful effects for the kids. That’s what was at stake — actually fully doing the opposite of what I had planned when I decided that I would volunteer and help serve the communities I visited in some capacity. Up until now, I have only served through tourism itself, using local businesses and seeking out ways to infuse money in the local economy. And now, I planned to take a much closer look at the volunteering industry in Cambodia.

Using my handwritten directions from FLO, the tuk-tuk navigated outside of Phnom Penh and into the dusty lanes and backroads outside of the city. Although the city is large, it began to feel very rural within 20 minutes. The unpaved lanes featured chickens running past. Large rice paddies shone in dull greens and yellows since it was still dry season. Then he pulled up in front of the Future Light Orphanage. All I could think is: Here we go! 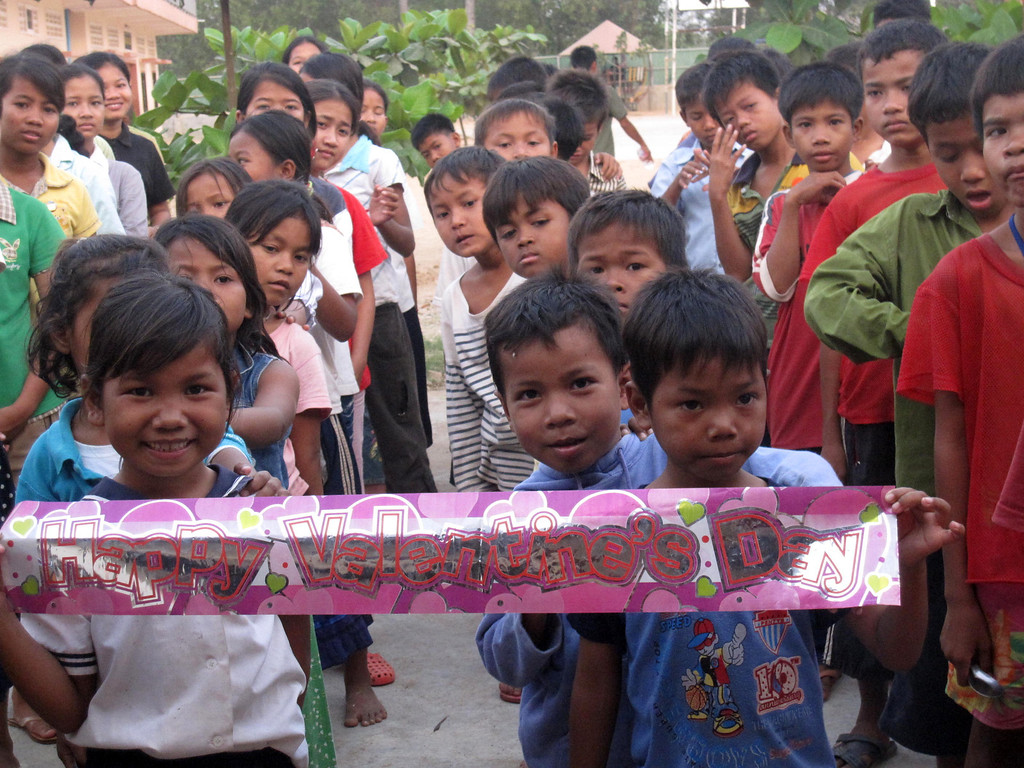 The security guard took our passport numbers, and since we were expected he passed us through the gates. From the entrance, the green lawns and blossoming flowers stretched into the distance. Buildings lined the outskirts and it looked like the land stretched far into the distance.

Within a few minutes, the volunteer organizer ushered us into our swanky accommodations. Far from free, this orphanage is supported by a rotary club in Hawaii and the donors have paid for nice suites with soft beds, A/C, hot showers, and WiFi access. We toured the compound immediately, and had quickly developed an entourage of kids of every age and size. Laura and I were a bit of an anomaly at FLO. Although they have many volunteers, the program is most often filled with the older men and women sponsoring the FLO students. In short, we were the youngest visitors by a few decades. Usually the rooms are used by donors visiting the compound for a few days or weeks at a time.

Over the coming days and weeks, (and in the years since I left FLO), the organization presented intriguing projects and policies to support and protect the students in their care. Roughly 210 kids live at FLO, and they range in age from five to 20 years old. The older kids attend the University in the city, and they have to really want it. The Uni students ride their bikes three hours roundtrip every day to attend classes. So long as they are in school and working toward an education, they are allowed to stay at FLO and continue having that support and family unit that so many orphans and foster kids lack once they turn 18. The older students shared that they planned to stay at FLO until they had graduated and secured a good job with their education.

FLO’s mission is to help develop children who become self-sufficient adults with a strong contribution to their country and their community. The orphanage was founded originally with orphans from the Khmer Rouge; Nuon Phaly’s story is harrowing but incredible. She has kept the spirit of it going with an aim toward addressing rural poverty. There is a big emphasis on working and education as the way that these students can end the cycle of poverty that faced them in childhood, and is still facing some of their family members living in rural areas of the country. In that way, it seemed like the mission ran more like a boarding school than an orphanage. 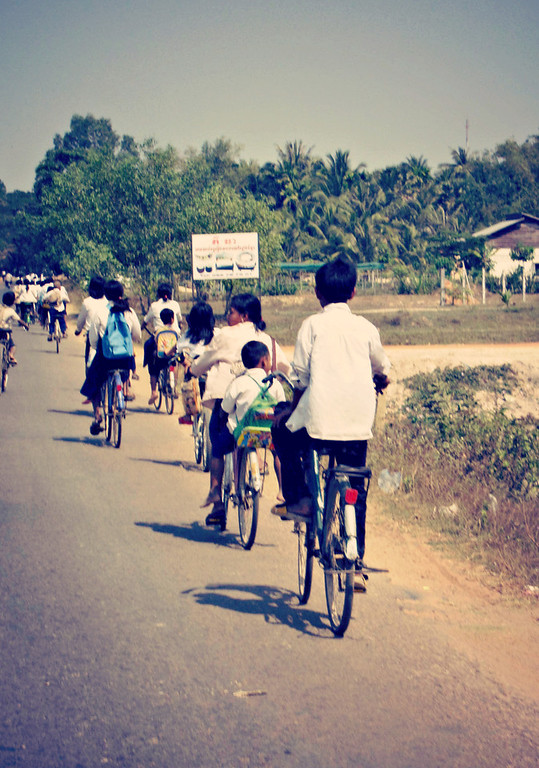 The foster parent program and the English  language classes are the two strongest programs in place at FLO. Nearly all of the children are placed with e-foster parents from the United States. The foster parents sponsor the child on a monthly basis and in return the students send weekly emails, cards, etc. FLO once supported 100+ children without this program, but through the support of the foster parents and the increased interest, FLO has grown into a larger campus that not only houses children, but runs English and computer classes to hundreds of children from the nearby villages.

It’s intriguing to see the actual effects of these e-foster programs that I have read about. FLO does more than just ask for money, they encourage the children to communicate and share with their foster families, who have committed to being a part of these kids’ lives for the long-term.

With most of the children sponsored, FLO focuses on pushing all students to learn fluent English. In addition to schooling at the local school, the kids attend daily English language classes on the FLO campus. Even the younger kids know a bit of Spanish, and the older students communicated extremely effectively.

English is strongly emphasized. By the time they graduate from University, most of the students are fluent in English. This push is to offer a range of opportunities and jobs for the students, from tourism to education to even living or moving overseas if they wanted.

For volunteers, it’s actually mostly centered around learning about FLO and partaking in the daily activities. They students have a very structured schedule and as short-term volunteers we were given a few areas where we could help. I spent my mornings in the library with the younger kids — many were out of school since it’s exams time. I would read them stories, practice reading aloud, sing songs, and color. After lunch, the older kids returned from school and Uni and we used the common areas to chat with the students, help with homework, and learn more about their lives.

The kids all call younger volunteers “brother” and “sister” and older ones are “auntie” and “uncle.” As I walked throughout the compound, the kids rushed passed with a cheery “Good morning sister!” The only other role for volunteers was to help in the nightly English classes. FLO has full-time teachers on staff, so volunteers are allowed to play teachers helpers inside of the classrooms. It was good fun to learn about how they run the English learning games. And while our presence wasn’t a huge part of their day, the students did have a bit more one-on-one tutoring each evening since we could help the teacher go around the room checking classwork.

And with little to do when the kids were in school, Laura and I teamed up with Auntie Donna (one of the FLO e-foster parents) to assemble valentines goodies that had been donated to FLO. The older girls helped us develop an assembly line for the 200+ gift baggies we would need and we spent hours playing Cupid. It wasn’t a ton, but each baggie had a valentine, sticker, eraser, and a few little candies.

It was a small thing, but these little packages made in their day. We had a small party after the kids ate dinner. It was a wonderful way to spend Valentine’s Day. Throughout my time at FLO, I also made a few runs to the Indian embassy to secure my visa. It was a huge hassle — the embassy is only open for a tiny window of two hours each morning — but I have it. That means I meet up with my cousin in Mumbai in a few days. Eeeek. India feels like a whole other experience. We will be traveling across India pretty quickly for two months, and then we have booked time volunteering at a monastery in Nepal teaching English to the young monks. Good thing I have a few new English learning games under belt after this time at FLO!