It was a little painful to wake up at 5:00am, but we had no choice but to catch the morning train out of Jaipur after the Holi Festival of Colors revelry. My cousin and I dragged ourselves out of bed, slung our pre-packed backpacks onto our shoulders, and trudged to the train station — it was early. It also hadn’t quite hit either of us yet that we were on our way to Agra to visit the Taj Mahal.

I mean, can I just repeat this one more time: the TAJ MAHAL! Once we arrived at the train station, I sipped my milky masala chai with wafers of steam floating into the space in front of my face. A maelstrom of thoughts raged wondering what the day would bring. 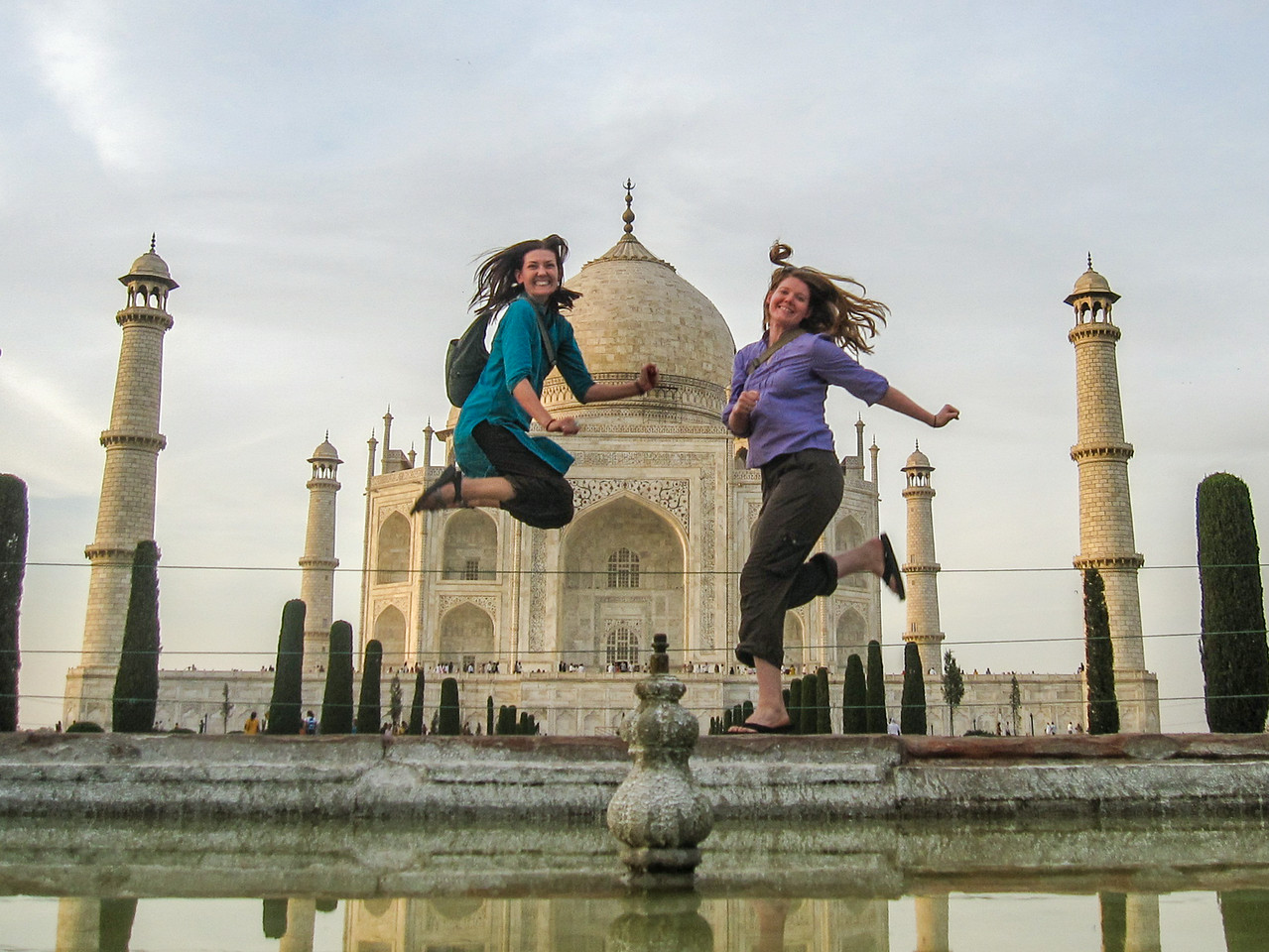 Arriving in Agra by Train

On the recommendation of our fantastic travel agent in Udaipur (he hooked us up with some amazing deals on trains and flights) we were not going to spend the night in Agra.  Instead, our four hour train from Jaipur to Agra would put us into the city around 10am.

Then the plan was to check our bags in the luggage room at the train station and then wander the city for 14 hours until our next train at 12:18am — we weren’t thrilled at the prospect of staying in the city without a place to hunker down and rest, but other travelers had concurred with the travel guide that you just don’t need to stay in that tourist-trap of a city for more than a day.

So, a bit groggy and a whole lot of hungry we landed at the Agra Fort train station all prepared to check our bags.  We caught a lucky break at this point.  The luggage storage man asked to see our onward ticket and informed us that our midnight train departed from the other train station. Yeah, ok. Another train station, we knew that. … With that we caught a rickshaw to the other station and were saddened to discover that this luggage room was way more sketch than the previous one.  With that in mind we found an empty room, closed the door, and began a massive reorganization of our packs.

One of the downsides of carrying a computer is that I always have to be super cautious of where I am leaving my backpacks.  Normally, in this situation Helen and I would have just carried them for the day, but as luck would have it you are forbidden to carry electronics into the Taj (or books for that matter — how ridiculous is that). 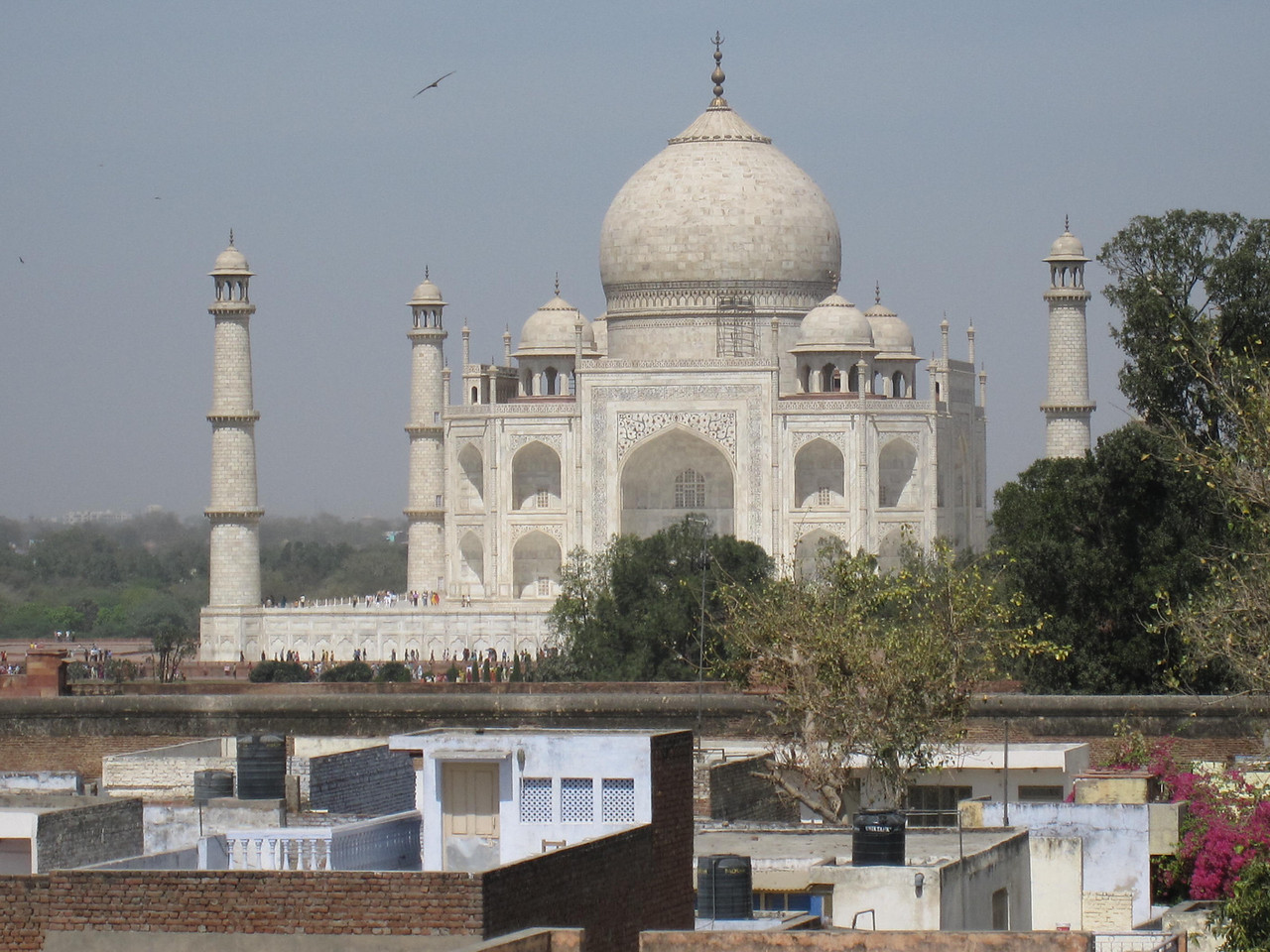 With a clear picture of the questionably safe luggage room in mind we pulled out my Pacsafe. This contraption is a steel mesh net that fits over my big pack, and then I chain it with its cord to stationary object. I haven’t used it very often on this trip, but it has been priceless the half-a-dozen times I have had to use it. I put both mine and Helen’s laptops in my big backpack, repacked, and then headed to the luggage room to check our bags and get on with our day.

The two guys I used as protection for Holi in Jaipur gave us a stellar recommendation for a rooftop restaurant with views of the Taj and a relaxed atmosphere where we could hang out for several hours when we needed to recharge.  The Saniya Guesthouse and Restaurant (which may not be the best place to sleep, but has a really decent rooftop restaurant) gave us our first glimpses of the Taj standing proud and gleaming in the bright mid-day sun. We had a delicious lunch of vegetable jalfrezi, naan, and some sweet lassis to prepare ourselves for the touring of Agra Fort and the Taj.

Agra Fort is one of the best Mughal forts in India.  This spot is a UNESCO World Heritage site in its own right even though it’s hard to pay attention to the Fort with the Taj Mahal visible just in the distance from nearly every corner. The Fort channels the look of the Tah and much of the Fort is built in vibrantly red sandstone but later additions were done in the same white marble that makes the Taj look so magnificent.

The Taj Mahal itself was built by the Emperor Shah Jahan as a memorial for his wife who died in childbirth. That must have been some intense love, right! He built her one of the most spectacular monuments on the face of the earth.  The entirety of the Taj is built in symmetry and the wife’s body lies at the very center. 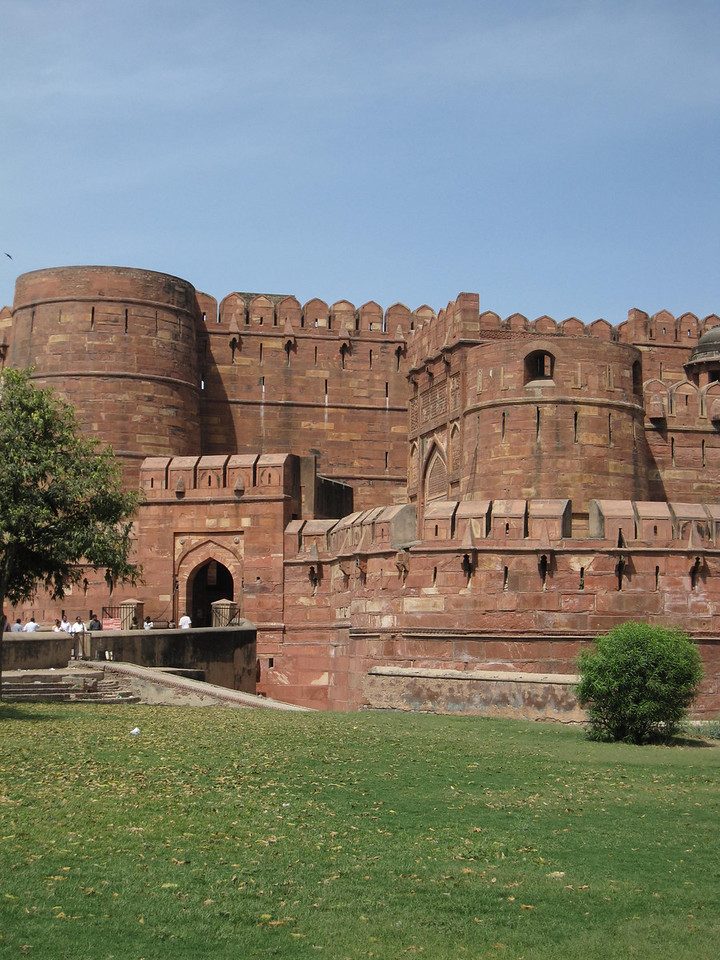 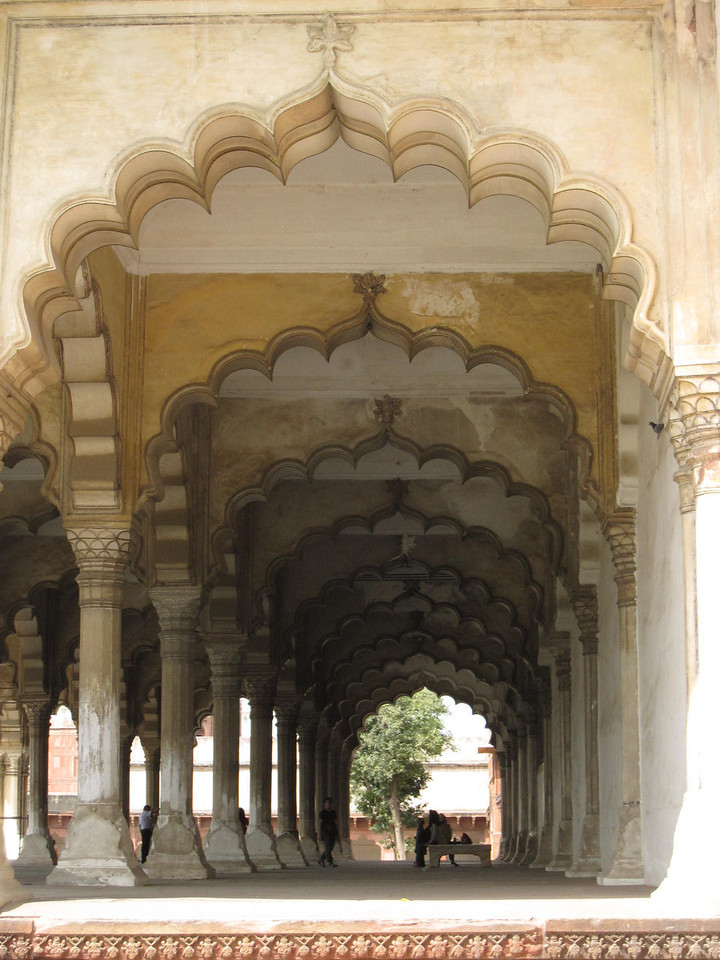 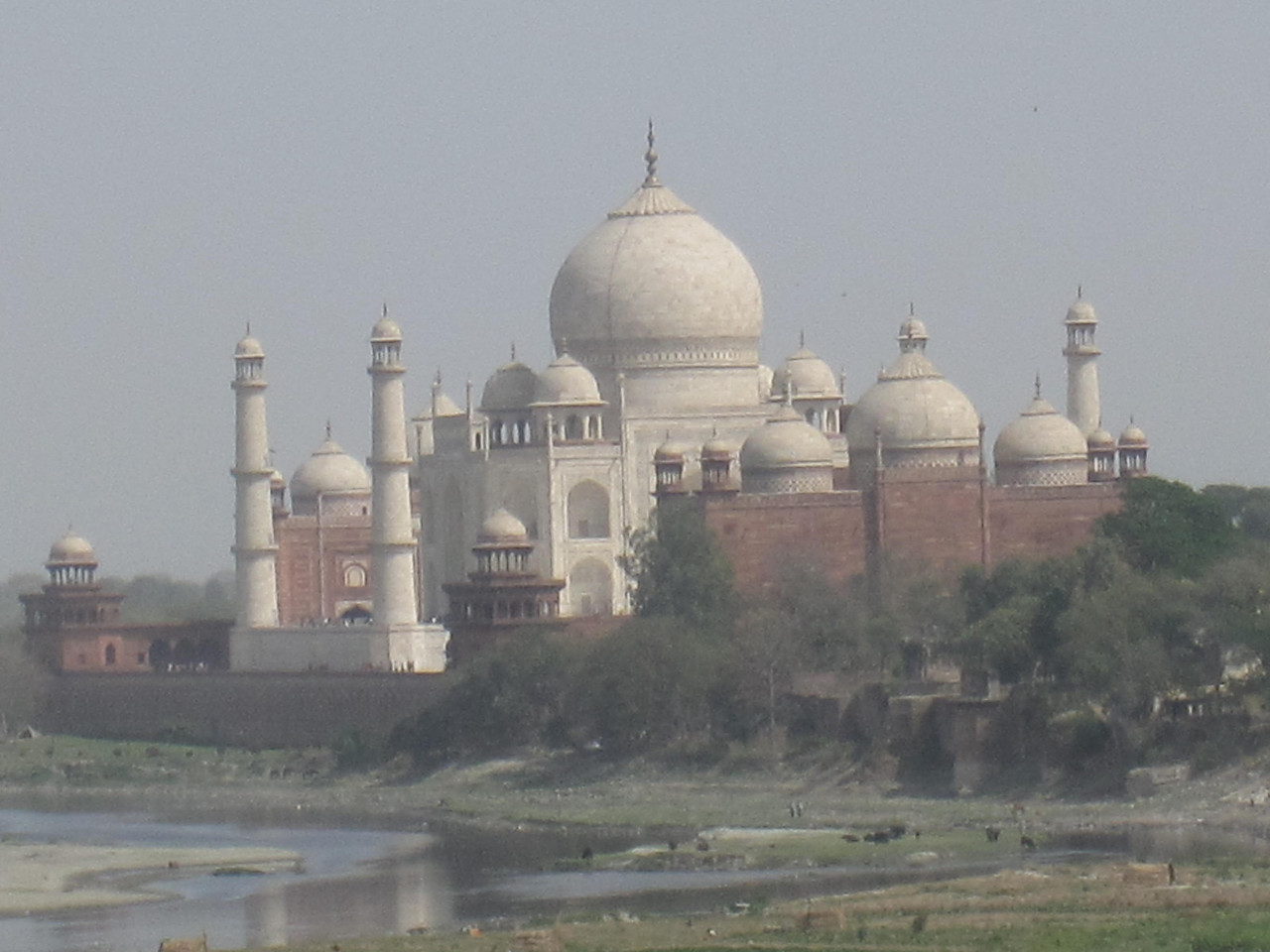 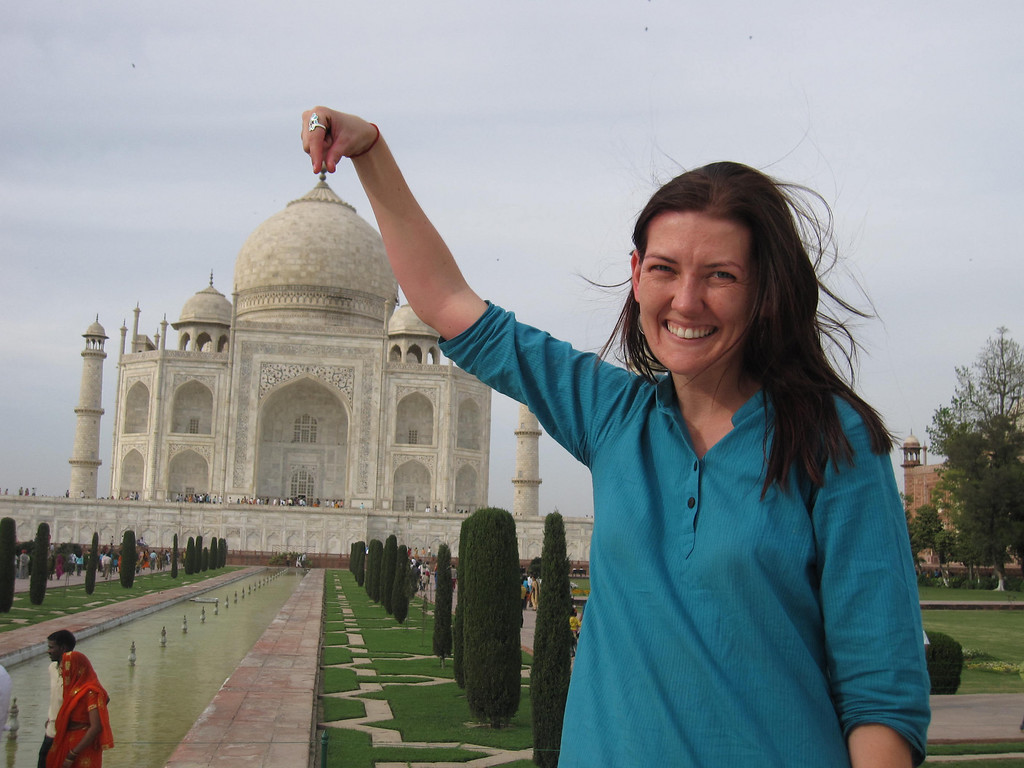 We took a guide around the Taj and were able to learn a lot about the history of how it was built as well as some of the neat optical illusions that were built into the design.  I really don’t know how to describe the Taj so I will concur with the Indian poet Rabindranath Tagore, he poetically describes the structure as “a teardrop on the face of eternity.”

As a sad part of the whole story, Jahan, the emperor who had the Taj commissioned and patiently waited the 22 years for its completion, was imprisoned in Agra Fort by his son shortly after it was completed. Jahan was forced to spend the last eight years of his life looking at the masterpiece from across the river and through the Fort’s windows: his view until the day he died and was then put to rest beside his wife.

Our guide spoke great English and wasn’t pushy at all like so many of the others we had encountered and, in the end, I was really glad we forked over the five bucks for him. Although it’s spectacular on its own accord, it’s doubly spectacular if you understand the architecture and special peculiarities.

One of the things he pointed out was a discrepancy. All of the dozens of columns around the Taj are in an angular design, but although the Taj is designed with perfect symmetry in mind, the creator felt that nothing can acheive perfection except for Allah (God) so he made one round column at the back: 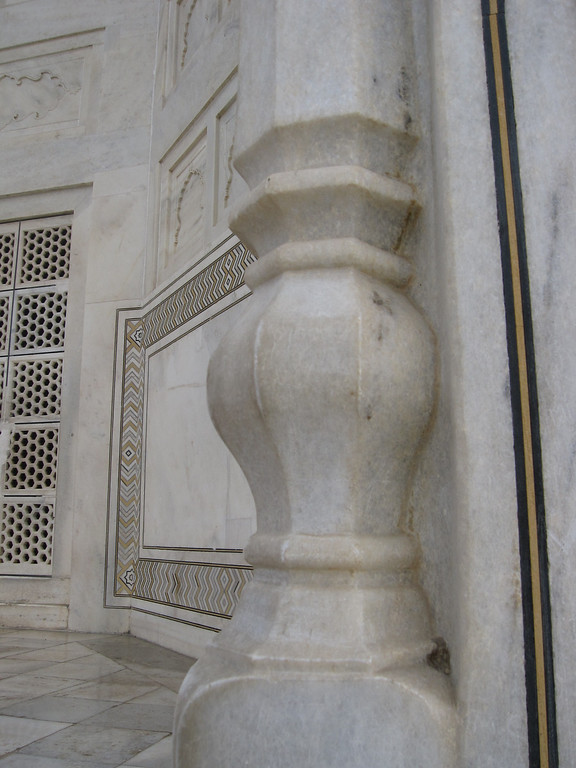 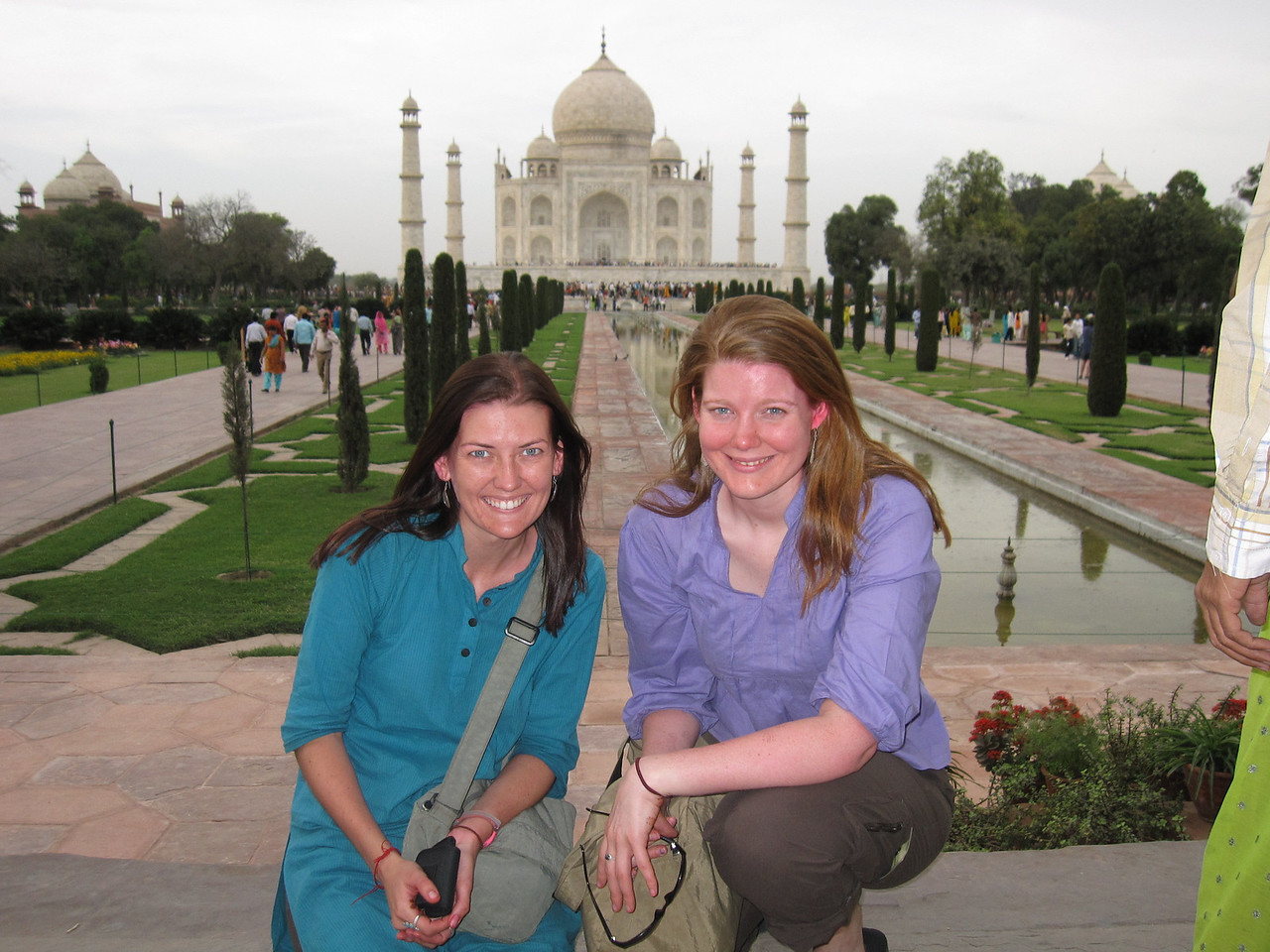 Also, having a guide made my cousin and me less of a spectacle while we were guided about. As soon as we wandered alone, we were immediately and frequently accosted by groups of Indians begging for “just one picture.”  They invariably are never satisfied with one picture. Many a time we were stuck taking pictures for several minutes as we posed with each member of the family.

To counter some of this attention whenever groups of young guys would approach us we requested that they dance for the picture.  Some charming kids we met in one of the early towns taught us the phrase “tom naacho” (will you dance) and we used it often and much to the hilarity of all those who heard Hindi words coming out of our very, very white selves.

It worked a couple of times, and one enthusiastic Indian guy began the popular, one hand in the air, one hand on the hip thrusting and hip jutting moves from his favorite Bollywood hit. My stomach hurt from the giggling. It was hilarious, and my I happily clapped along and then smiled big for his picture; he earned it!

I also took a bunch of shots with this family — the little boy was seriously cute! And they had all never really seen a white person before. 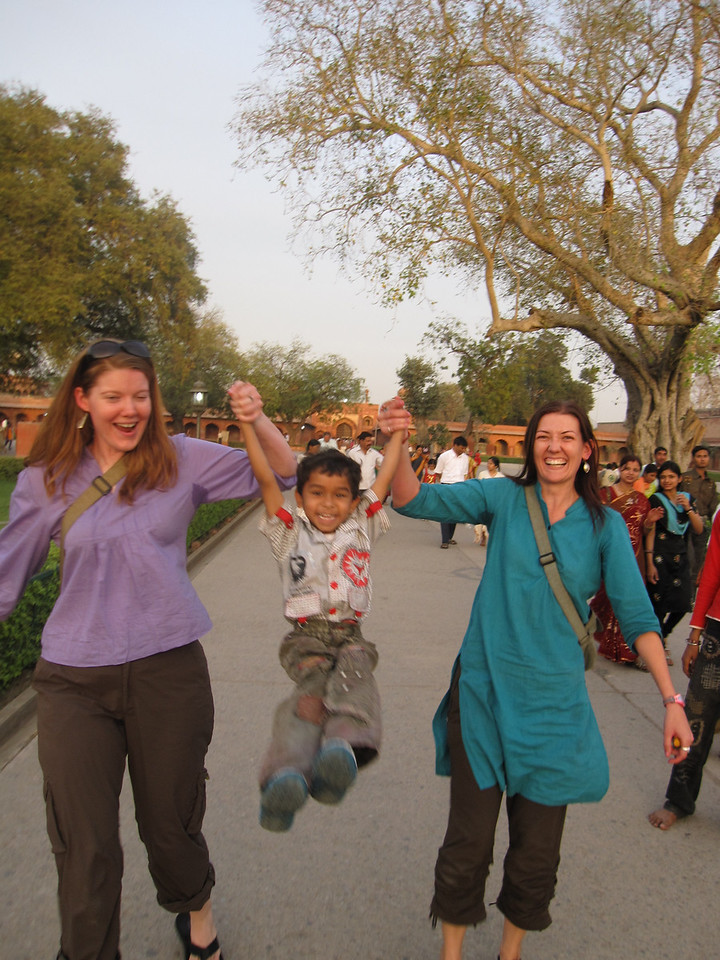 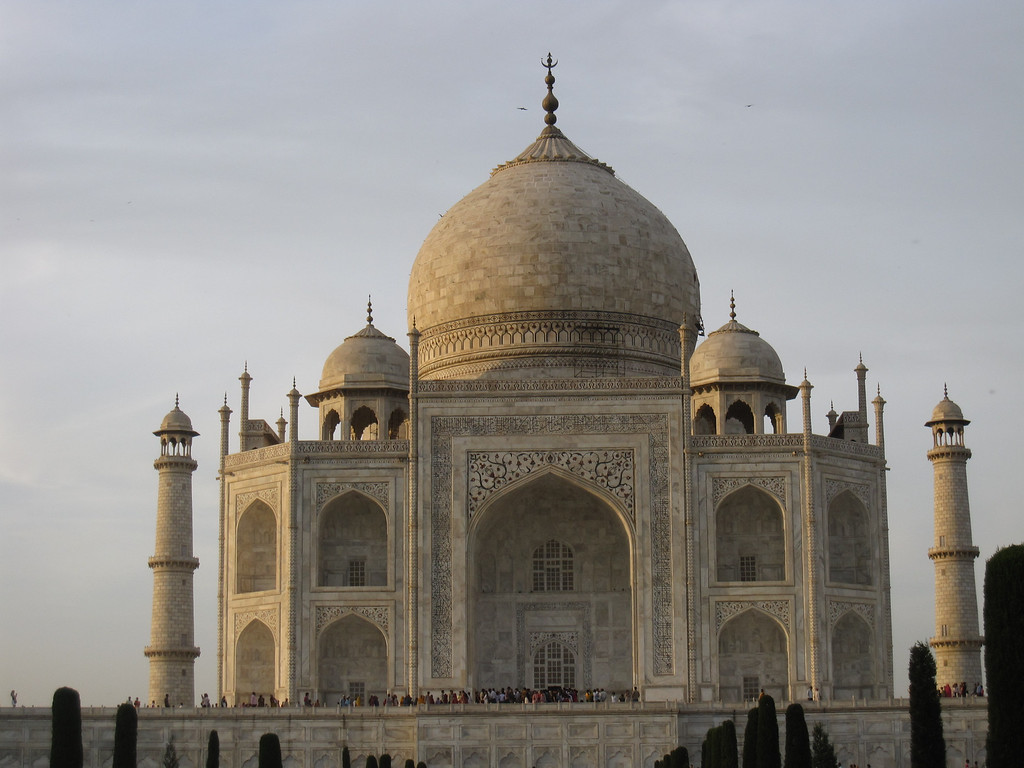 For a while, as we wandered about and relaxed on some shady benches we were pretty much convinced that we had the worst luck ever.  We had been at the Taj for hours and the sun didn’t even make a sneak peek from behind the clouds!

I had heard so much clamour about the changing colors of the Taj’s white marble and as we were walking back across the extensive grounds, resigned to have dinner at Saniya, the sun peaked out from the clouds and we were fortunate to watch the white marble of the Taj turn impossible shades of peach, tangerine, and golden yellow. Spectacular.

We capped it with dinner overlooking the Taj and then headed back to the train station to wait out the remaining three hours.  Up next is the longest train ride yet, 17 hours on the 2nd class sleeper section of the train. You don’t know intensity until you’re the only Westerner in the commuter section of an Indian train.

Currently Reading: Shantaram by Gregory David Roberts. I am loving reading this as I continue to journey through India. Oh, and my India Lonely Planet is pretty much the best purchase possible. It has come in so handy.