Pharping is a large town by Nepali standards. It’s small to be sure, but it’s bigger than the tiny villages that dot the hillside as the bus putters through the mountains for an hour before arriving at Pharping. The town has a local grocery store. Smaller than a 7-11, but it has the most basic of necessities in life. Rice, eggs, and junk food. Sometimes, although I am not meant to eat sugar because of a medical condition, I splurge on a snickers bar. Which they sell, so that made me happy. When I traveled in Laos, I could rarely find any chocolate, but here the Nepalese must enjoy chocolate too because nearly every shop offers something.

It’s interesting to actually see that the local grocery store is so small. It is representative of the nature of rural life here in Nepal. Locals eat the basic staples, and that food is fresh — or at least prepared from scratch. The rice and veggies are bought from local farmers. Eggs are likely from their own chickens. Processed foods of any sort, especially junk food, is an expensive luxury unaffordable for most Nepali families. 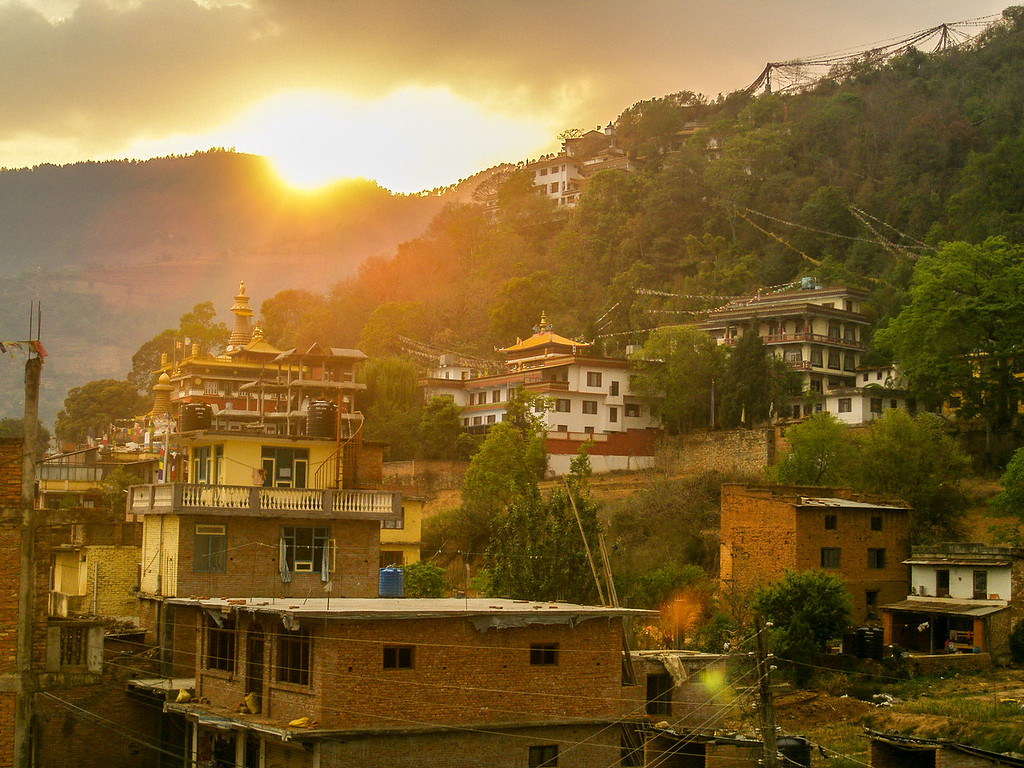 At the monastery where I volunteered, the staff and students all helped cultivate the garden in the back of the property. This garden was an important part of allowing the monastery to serve the students a healthy range of fresh vegetables and meat alongside the lentils, which is the most common food in Nepal. These rural towns are comparatively quite poor if you consider the tourism wealth that floods into Kathmandu, and even buying food from the local market is out of reach for many families. If you can’t grow it, you can’t afford to eat it. As you journey deeper into the Kathmandu Valley, it’s apparent that this is still a farming culture. Stepped terraces cut into the mountainsides, and the lowland valleys are home to a range of vegetables and homes. By planting a garden at the monastery, the boys are among the lucky Nepali — they eat fresh vegetables every single day as a key part of their diet.

My guesthouse provided breakfast and dinner while I volunteered teaching English in Pharping. Nepali people in poor areas eat dal bhat twice a day. My placement served eggs for breakfast many days, and every night dinner consisted of  dal bhat, which is rice and a lentil curry. After a couple weeks, we convinced them to use some of our food stipend to cover vegetables, and the cook even made Tibetan momos once, which was a fun treat. If our meals at our guesthouse were uninspired, the monastery served a beautiful feast each day. Most days, the meals are vegetarian, but the monastery strives to give the growing boys a nutritious diet and they would eat meat once or twice a week, and trade out the rice for potatoes.

This diet is remarkably different from my U.S. diet, but in actuality, it’s similar to the meat and potatoes of my Irish ancestors. While I loved my time eating the range of dishes in India, the months in Nepal had me craving variety. There is a great range of the cuisine of Asia, but in the world’s poorest countries, there is similarity in the way the food is pared down to its most basic components. Six weeks I spent in Laos and Cambodia had prepped me for the Nepali tradition of eating rice at every meal (at my Cambodian volunteer program we ate it three times a day!).

Having only a rough knowledge of what it would be like to travel through Nepal beforehand, I though the cuisine in Nepal resembled Indian food. And although Nepal borrows some flavors and influences from India, there are few similarities in practice. When I questioned the monks at the monastery, they simply stated that they could imagine no other life — they loved dal bhat and enjoyed eating it every day. When I shared with them that people in the U.S. eat rice just a few times a week, they were horrified and sad for me. So, as strange as I find their diet, they are equally appalled by the idea of a world with less rice.

Life in the village is slow, and some evenings the handful of us volunteers would walk the about one minute up the hill from our guesthouse to the town’s only restaurant, the Snow Lion. If we ever ordered actual food, it sometimes took two or three hours, but as a treat, they would serve curd with honey and a steaming hot and deliciously spicy chiya tea, the Nepali version of the ubiquitous chai tea popular throughout South Asia. On a good day, one of our group would buy a mango on the walk home and we would feast on curd and mango — a tasty dessert option that I had never dreamed up before traveling throughout South Asia these past months.

One of the things about living in a rural village is the need to pace your life to the pace of life in town. And that means going to sleep a lot earlier than normal. If we stayed at the restaurant too late, we were like a horrible party guests overstaying their welcome. The entire town shuts down by eight, and the streets are deserted. The dusty food-shops silent, with shutters tightly closed. And because of the power shortages, the streets took on a ink-black stillness I’d never before known in a town with so many people sleeping nearby.

Even funnier, the charming Amrit never seemed to remember that we had left dessert. We were the only people staying in the hotel, but he would lock the door, forcing me to gently knock around 8:30 pm. Sheepish to be coming home late! He would audibly shuffle down the hallway in his night-clothes and shower shoes, shouting from just the other side of the locked door “Ssannon? Ssannon is that you? Why are you out so late Ssannon?” Then, he would wait on the other side of the door until I again explained the need for dessert. I would confirm that it was safe to open the door because it was just the four of us. This became a hilarious and absurd ritual every few nights. And if this were Kathmandu, perhaps it would justify worry, but in a sleepy town of 30,000 people, there was neither imminent danger, nor any chance that it was any other soul knocking on the door.

On the weekends, English teachers were given the entire weekend off, even though the students attend classes on Sunday. Our ragtag group would venture into Kathmandu on Saturdays to stock up on snacks. For some reason, a large portion of my days centered on the procurement of food, the eating of food, and the ponderings about the next meal and snack!

In addition to shopping at the larger grocery stores for snacks, my cousin and I would wander the streets of Thamel and the backstreets of Kathmandu in search of souvenirs. We had already done our sightseeing in Kathmandu, so on the weekends we either took weekend trips to other areas of Nepal (like Chitwan National Park!), or we simply enjoyed the range of restaurants and foods.

Thamel is the backpacker part of Kathmandu, and it’s a sensory overload. I am not a city person under most circumstances, and in this case, Kathmandu became a place that I enjoyed in doses. The vendors in Kathmandu constantly nag tourists to enter the shops if you make even a passing glance at the pashminas, silk scarves, wooden carvings, Tibetan singing bowls, and other goodies lining the streets. Other areas of Kathmandu hum with more activity, but fewer touts paying tourists nay mind. It’s in the city that I learned how to deploy a well-timed “chhahi daina,” which roughly translates as “I don’t need,” would shock the vendors into a grin to hear me speak Nepali, and they would let me pass without further comment.

One of the great things about Nepal is the fact that the Nepalese love when you try to speak their language. My cousin and I scored not only major kudos with the street vendors for bargaining in Nepali, but we also scored discounts, too. And as fun as it was to experience the bustle and pulse of Kathmandu, we would all head to the bus and find our way back to the slower pace of life in Pharping. 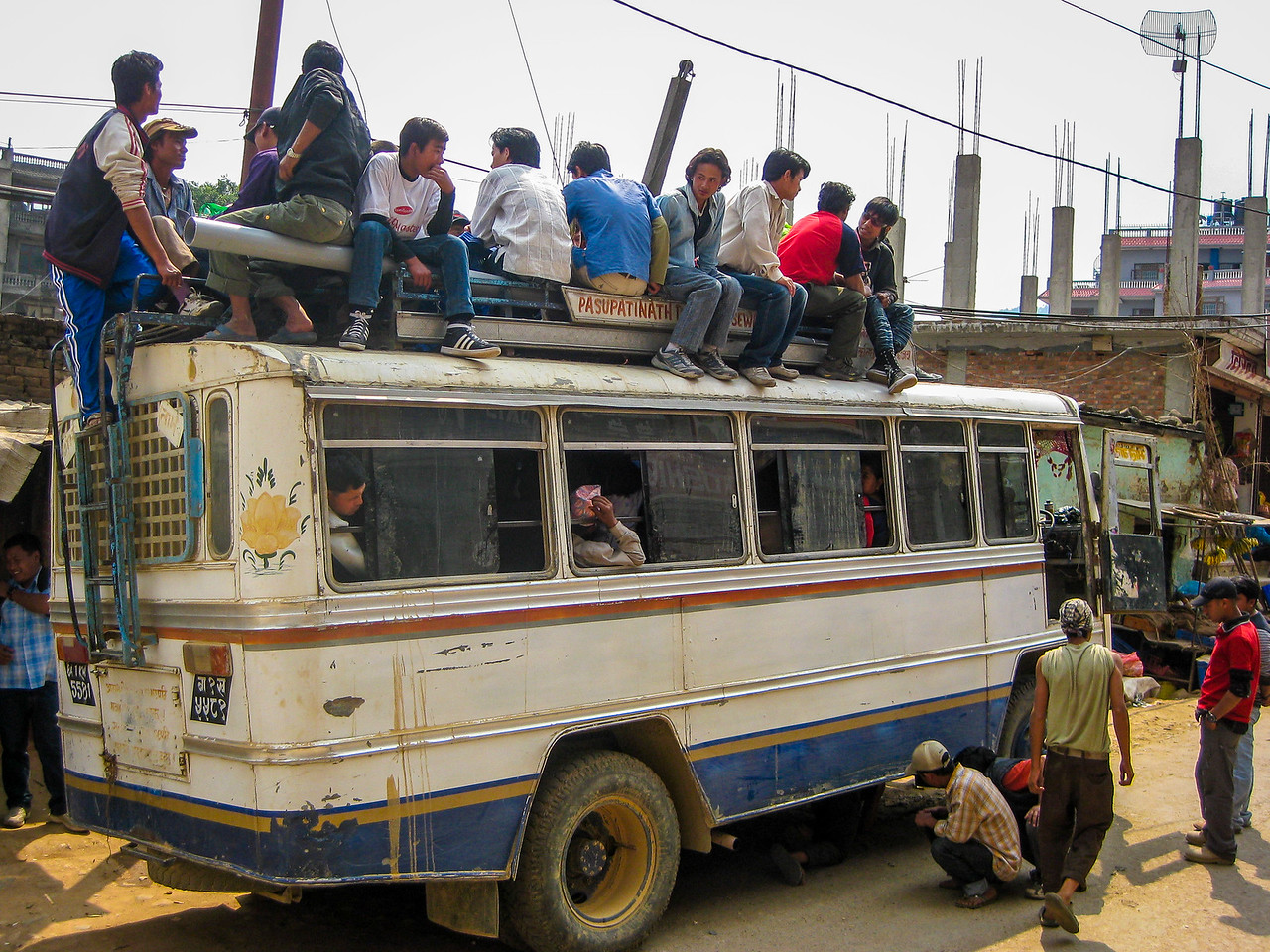 The bus ride between Pharping and Kathmandu is an adventure in and of itself every time we stepped foot on a Nepali bus. Sometimes the buses were perfectly empty and we would sprawl across the torn and dirty seats, each one with springs curling from their sad cushions. Other times, my cousin and I would wedge our large bodies into the crevice of other humanity penned in the bus. Because of our height, she and I would use one hand to protect the top of our heads, and then use the hand to hang on for dear life as the bus hurled itself around corners, bumped down the lightly paved roads, and snaked through the hillside back Pharping.

Twice I had to make the entire bus ride in that precarious position, an hour-and-a-half hunched over, with my neck cranked sideways, and my eyes fearfully glued to the road in anticipation of the deep potholes that would launch my body into the roof. No one ever said travel was going to be glamorous!

One of the best parts about my weekly trip into Kathmandu was the Baskin Robbins stand half-way between the bus station and town. Each time we rode out of town, the other volunteers and I would stop at the ice cream shop and wrap our taste buds around a sweet, creamy, and welcomed taste of home. Just like walking into a Cold Stone Creamery back home, the scent of waffle cones suffuses the store and it was a throwback to a place I haven’t seen in a good number of months.

Pharping is a smaller town deep in the Kathmandu Valley, which means the last bus out of town left every day between 5 pm and 6 pm. Once on the bus, we would strap on our face masks to protect from the harsh pollution. Health-wise, Kathmandu and is a polluted city. 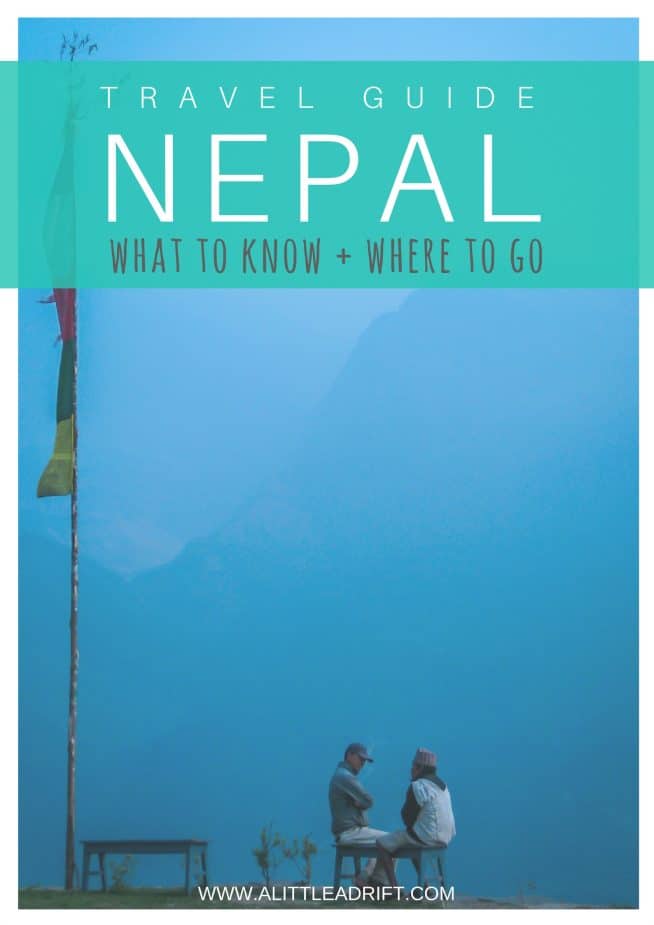 My cousin developed a prolonged dry cough as a reaction to all of the exhaust pollution that she inhaled during her daily 45 minute walks along the highway to her monastery. It didn’t take much to convince me to invest in a face mask for the regular commutes, and next time I will bring a high quality mask from home!

[box]Heading to Nepal? Check out my full Nepal Travel guide, or pick up a copy of the best Nepali guidebook. And if you’re keen to volunteer, check out the independent volunteer opportunities on Grassroots Volunteering.[/box]