Emerging from the train station in Mostar humbled me. We took a gorgeous ride from Sarajevo to Mostar and the sun shone bright on the glossy, newly painted buildings. Much of the city stood in stark modern relief against buildings riddled with holes, crumbling walls, and visible bombing damage. Even more than a decade after the Bosnian War ended, entire sections of town are vacant and abandoned.

In Sarajevo, the government repaired much of the war damage. Old Town Sarajevo stands proud and charming. Only the Sarajevo Roses serve as a reminder of the damage the war wrought on the city and people. The damage in Mostar, however, is different. The rebuilding process has taken longer. The buildings provide a visible juxtaposition of the war-torn past and the peaceful present. To those like me, who have known little of the destruction of war in my own country and lifetime, the damage was startling. Buildings crumbled and yet life had continued around it. The past was palpably a part of the present, and even time hadn’t erased that complex war that affected so many lives. 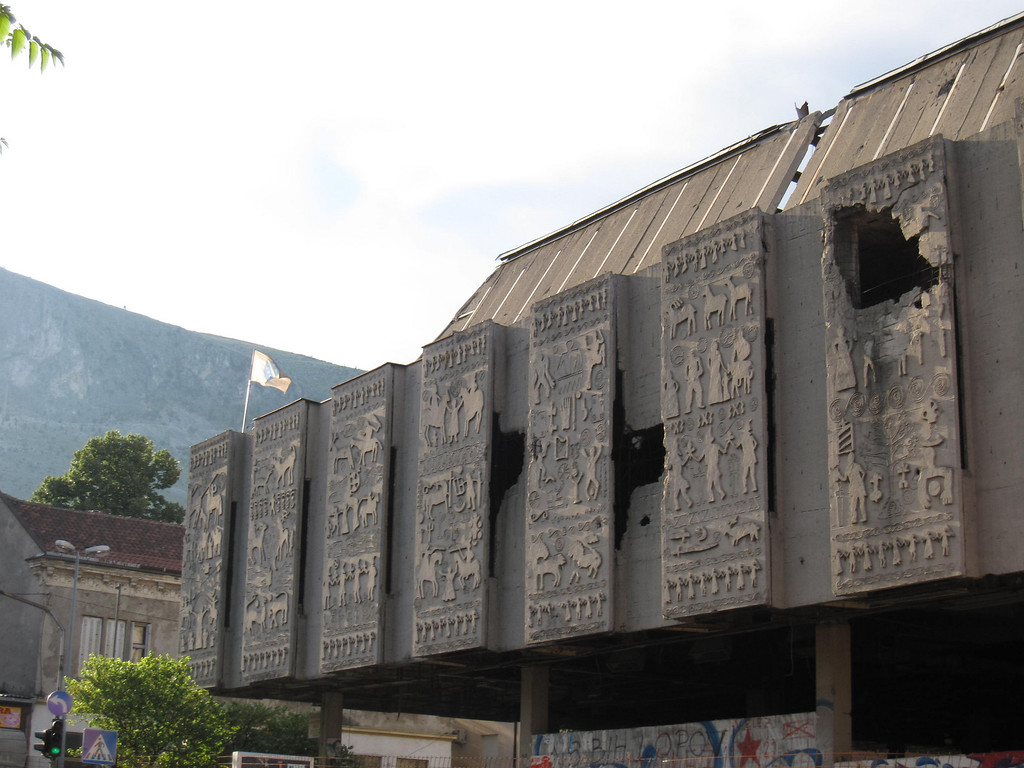 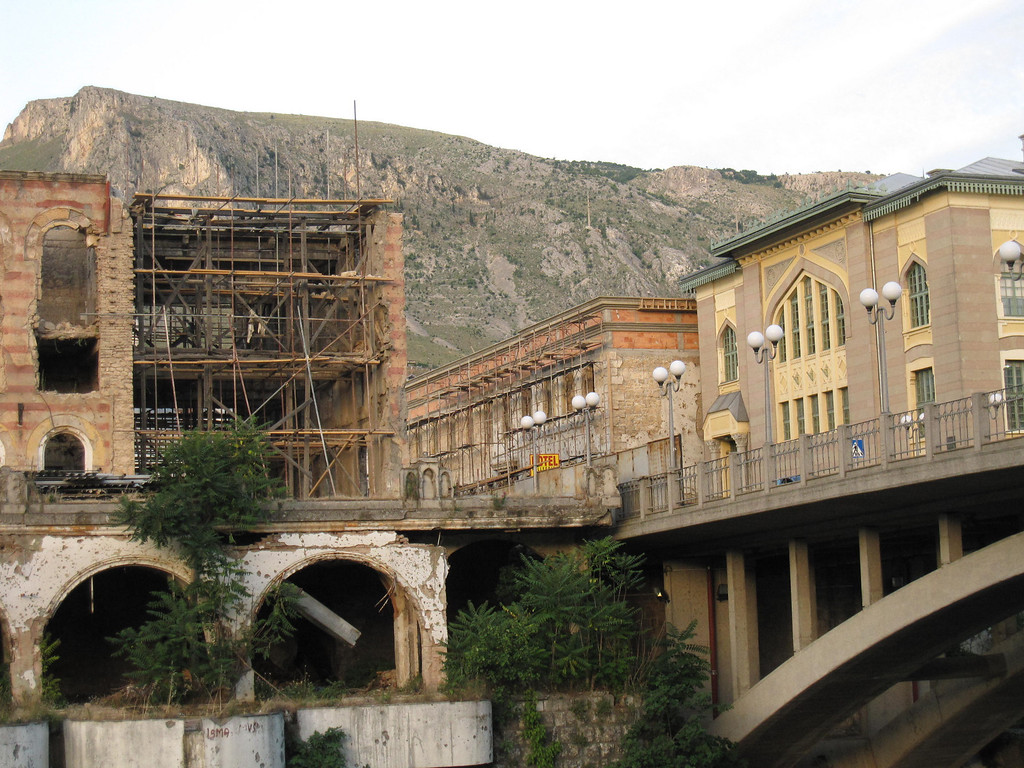 When we arrived in town, the hostel had sent Dino to meet us outside of the train station. With Dino’s help, we sped-walked through the backstreets to our hostel. Dino had ceased to see the destroyed structures lining many streets. To him, this was home and the history was long over, even if pieces of it remained.

I followed behind Dino as he pointed out the market, the center of town, and the other basics.

To me, this was the living proof that the history books hadn’t exagerated the toll the war took on Bosnia and Herzegovina. Nor had my mother’s best friend — a Bosnian refugee living in the States now — exagerated the extent of damage and war she had lived through before escaping.

The war took place when I was too young to have followed the events on the evening news, so before traveling to Mostar, I had spend a good deal of time researching the history and the impact of the war n this proud and gorgeous country. This is a sobering quote from the prosecution’s opening statement in a case against two men charged with crimes against humanity for their role in the Siege of Sarajevo:

“The siege of Sarajevo, as it came to be popularly known, was an episode of such notoriety in the conflict in the former Yugoslavia that one must go back to World War II to find a parallel in European history. Not since then had a professional army conducted a campaign of unrelenting violence against the inhabitants of a European city so as to reduce them to a state of medieval deprivation in which they were in constant fear of death. In the period covered in this Indictment, there was nowhere safe for a Sarajevan, not at home, at school, in a hospital, from deliberate attack.”

As a traveler spending time in a country with such a recent war, I always take care to tread lightly on any topics related to that part of the nation’s history. This was the case when I visited Cambodia and learned about the Khmer Rouge, and years later in Rwanda when the genocide museums across the country provided a stark reminder of all that had happened.

As soon as I entered Bosnia, the warmth and open welcome from the locals struck me as different from other places in the region. The country is rebounding from a hard recent history and as such they welcome tourism and those with a genuine, respectful curiosity about the Bosnian history, culture, and people. 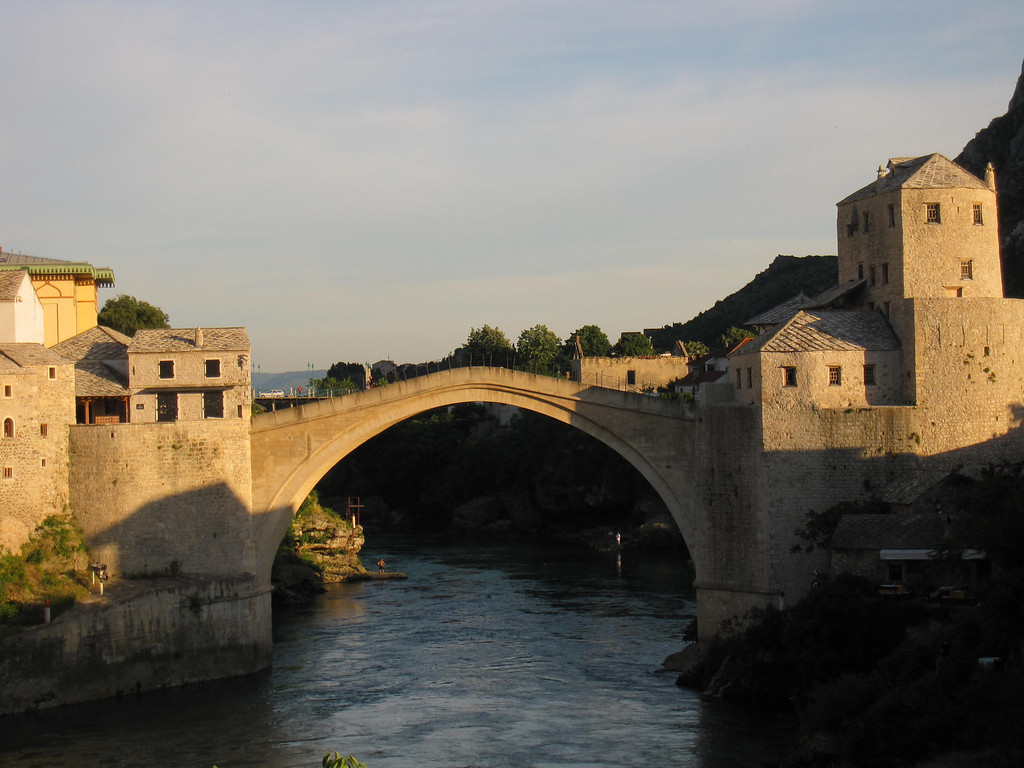 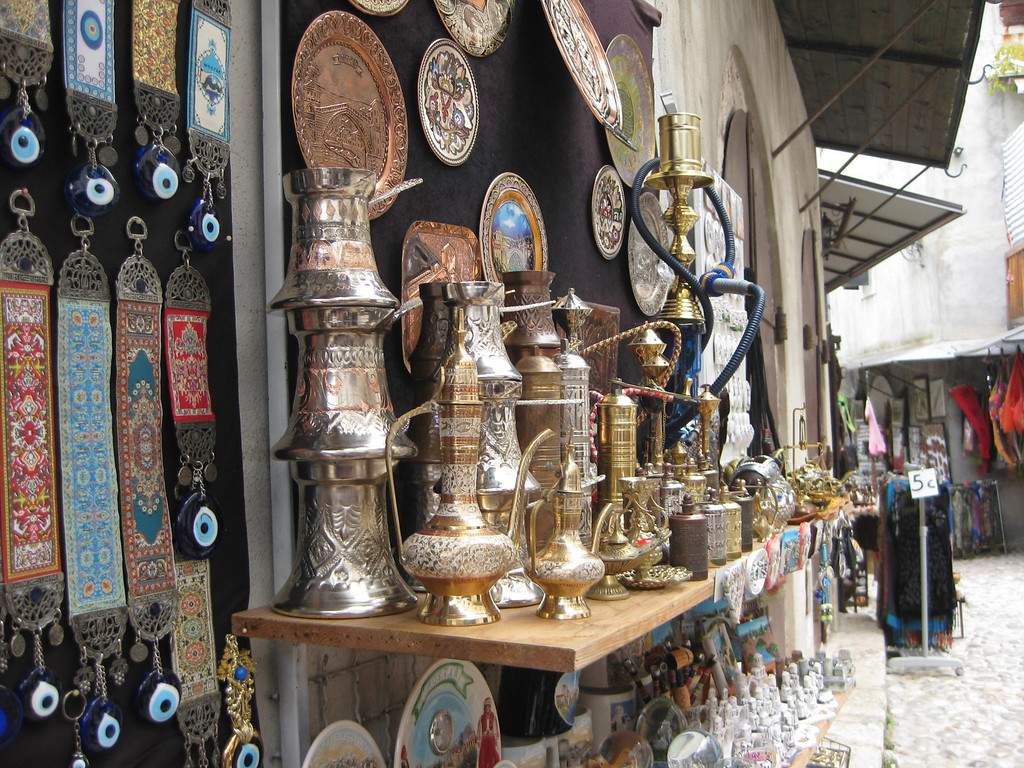 And perhaps because of that history, one that is now fully behind Bosnia, I was surprised by just how safe it is to travel and visit Bosnia. I would find this same parallel exists in the Republic of Georgia, where the very recent end to an internal war was followed by a strong sense of security and safety. Bosnia is far from the traditional backpacker trail. And although there are a few backpackers who here briefly on a route through Eastern Europe, most tourists visit Mostar on a day tour from Dubrovnik.

Because of the country’s tumultuous past, tourism is still a small part of the country’s total economy. Mostar sees a huge number of the day-trippers, but far fewer overnight tourists or those like me, in the country for weeks rather than hours. And that is a shame, because the entire country has undeniable charm, and perhaps nowhere more so than in Mostar.

Most tourists visit and stick to the Old Turkish quarter. This entire section of town is a UNESCO World Heritage Site and it includes the city’s most iconic spot: Stari Most.

Stari Most is a beautiful bridge that suffered immense damage as a result of the war. While the war damaged most of this gorgeous bridge, it was one of the first things rebuilt once Bosnia & Herzegovina found peace. Stari Most arches majestically across Bosnia’s Neretva River. Cobbled paths wind through Old Town, each street is lined with kitschy souvenirs and beautiful tea sets that glitter in the afternoon sun.

My cousin and I based ourselves in Mostar for a week, and we made it our a goal to get shots of this spectacular bridge bathed in a range of different lights, from the cool light of early morning to the warm ochre light of deep afternoon.

And with all of that time in the region, there were many possible day-trips nearby — most notably to Blagaj Tekke and Kravice Waterfalls. We also hiked to the huge cross that stands guard over the city from the hill nearby, the Kriz na Humu.

The hike is lousy, as far as hikes are concerned. We had to walk along a shoulder-less, busy road and dodge cars as they zipped around the curves. The views from the top, however, were spectacular, with pretty views of the river, Stari Most, and all of Mostar laid out below. 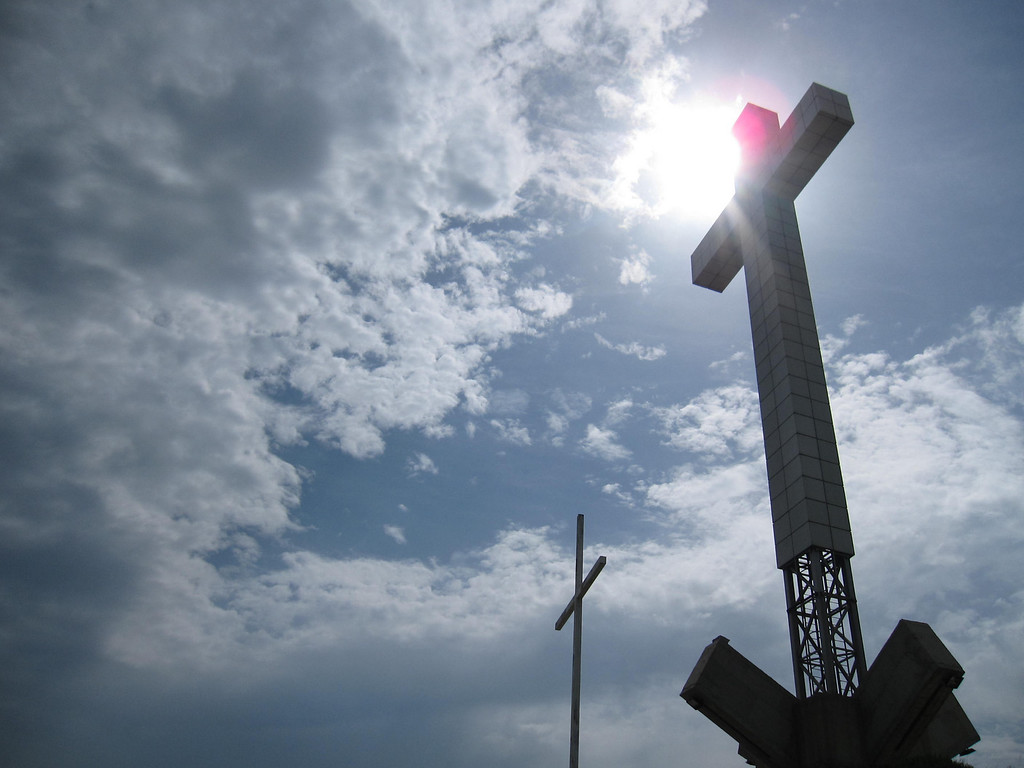 After having traveled rapidly throughout Italy and Croatia, we decided to relax and enjoy a leisurely pace in Mostar since we had found a hostel we loved. It operated more like a hotel, and with summer in full swing, the air conditioning was a nice luxury when the heat of they day soared to 100 degrees. We would take a siesta in the late afternoons and enjoy the fast, free WiFi.

Here is a short panorama of Mostar from the hilltop cross: