The bus skirted the mountainside as my cousin and I traveled toward Dharamsala, India. In my many weeks backpacking through India, this past week had begun the tour of subgroups and other cultures strongly present within India. En route to visit Dharamsala—or, more accurately the small town of McLeod Ganj—I stopped for several nights in Amritsar to learn more about the Sikh religion, and to visit the holy Golden Temple. Amritsar is a crowded, congested city and after sitting on the shores of the Temple’s lake, I boarded a bus that would take me further into the Himalayan foothills, and into yet another culture.

Although it’s still technically India, McLeod Ganj is better known as “Little Lhasa” since it’s the seat of power for the exiled Tibetan government. To walk the streets of this small mountain town is like an exit from India. Although there are some ethnic Indians in the city, the bulk of the town is composed of Tibetan refugees. And, the His Holiness the Dalai Lama calls McLeod Ganj home.

Having spent more than a month in Rajasthan, an intensely populated area bustling with tourists and touts and people. This time in India’s far north was a chance to take a step back from the pace of my previous travels. Arriving in McLeod Ganj was a sanctuary from the sensory assault of the past weeks. The weather was cooler, the mountains misted in the mornings, and the tall peaks blotted out the sun early in the day. With a gorgeous guesthouse secured (we stayed at a great budget spot the first few nights but then moved nicer when we got sick), my cousin and I decided to camp out in McLeod Ganj for a week.

[divider_flat]I had high hopes that this base would afford me the chance to hike in the mountains around the city. Unfortunately, traveler’s sickness final struck, and it alternated its victim. My cousin and I had done well for five weeks—we avoided even the whiff of sick. But the traveler’s adage proved true—it’s not a matter of if you’re going to get sick in the country, but rather when. I had traveled with a SteriPen for the past weeks in India. This little device was very handy. It saved us money and it also eliminated the assault on the environment that comes from mass consumption of bottled water in a country that has no effective waste management system. The SteriPen never failed us, but instead we were felled by the street dumplings we had craved on arrival. I deeply love Tibetan momos and the chance to eat them all day from every location seemed fortunate. But instead, those dumplings shaved several days from our time in Dharamsala.

Traveling in developing countries has challenges, and now that I am many months into traveling through Asia—first Southeast Asia and now India—I am weary of hugging more toilets. I am also not a huge fan of mega dosing on antibiotics, but it’s a given for long-term travel. Even though I had a huge course of antibiotics to overcome dysentery in Laos, I needed another course for this bout of traveler’s diarrhea. I am stepping up my caution once again. When so many weeks pass, it’s easy to let my guard down and crave fresh fruits even if I have a niggling doubt that they’ve been sterilized. 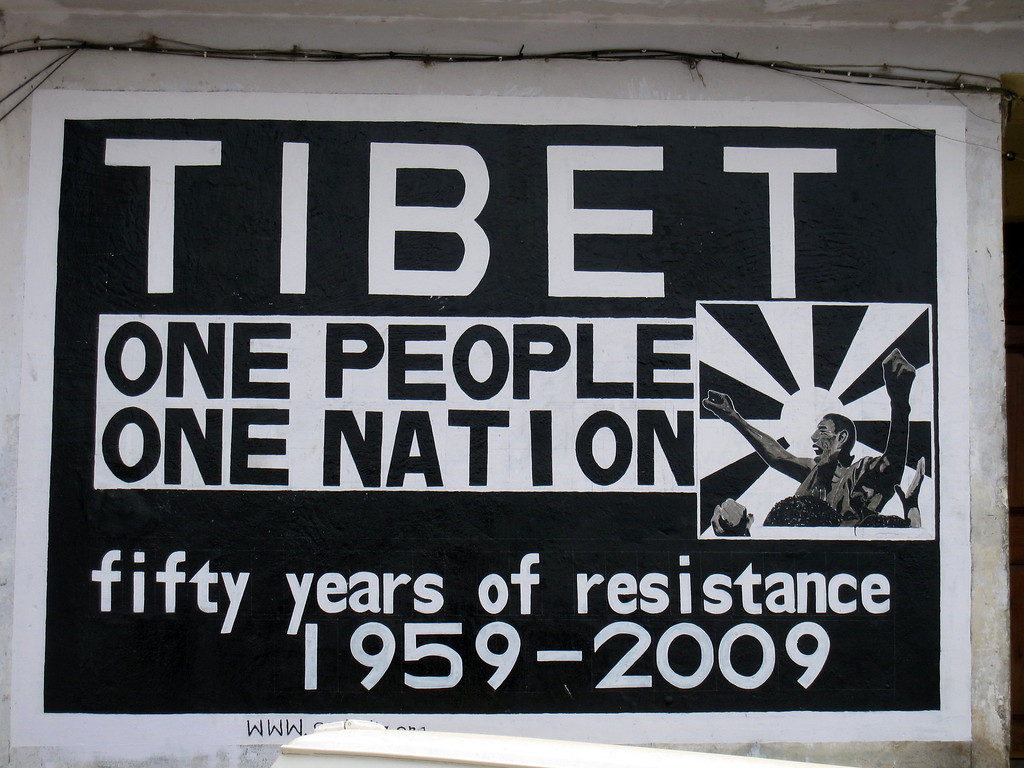 Anyhow, that took me down for the count for part of my time in McLeod Ganj. But as for actually visiting the area in and around Dharamsala—there’s a lot to offer! The main activities center on either the Tibetan aspects of the down or the hiking. My cousin and I both took this time to learn more about the situation in Tibet. Knowing only the basics about the conflict between the Tibetans and the Chinese, learning the scope of the was sobering. The Tibetan museum is a basic building and exhibits center on rooms full of pictures that tell stories about the many the Tibetan refugees crossing through the snowy mountains to find freedom. It’s harrowing, they faced frostbite, lack of food, and general poverty in their quest to live and find freedom. Once in India, the refugees struggle to rebuild their lives with the support of the Tibetan government in exile. 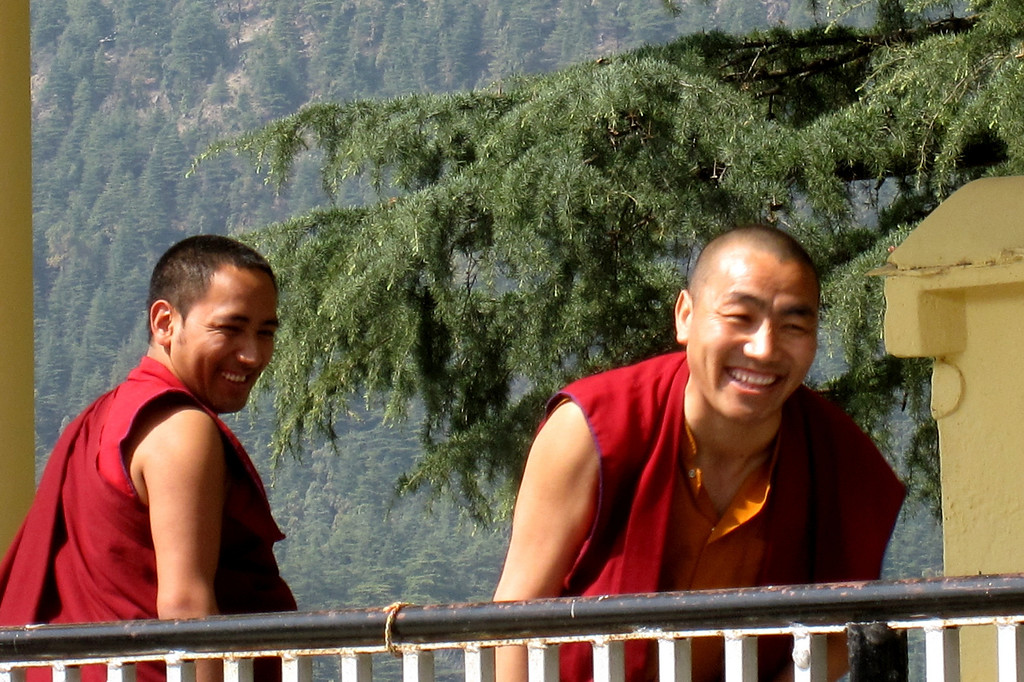 Near the museum is a large monastery where the Tibetan monks live. Visiting the monastery was a fantastic experience and a real highlight from my time in the city. The older monks were using the open grounds of the monastery to prepare for their final debates. If you have ever seen a roomful of monks debate, it’s not something you are likely to forget! The debating style is unique. They emphatically argue their points to the other person, then make a large slapping/clapping motion at the end to both emphasize the point and throw the focus to the next person. I wrote a bit more on that here.

It was neat to hang out in the courtyard and observe the process. It’s an open and welcoming place, so there was no pressure to do anything other than enjoy and ask the occasional question when I found an English speaker.

The Dalai Lama wasn’t feel well during my visit, so I wasn’t able to see him speak in person. The week before I arrived, the Tibetans rallied against 50 years in exile. Although the event had passed, the general tone of amplifying their message and sharing their struggles was ever-present. Tibetans are a peaceful people, but they wanted to let the world know and remember their struggles and displacement.

One of my favorite new finds is a tasty is a salted butter tea. Well, that and the Tibetan brown bread. Oh, and the momos, of course. In fact, all of the Tibetan food was delicious and contained a complexity of flavor within seemingly simple dishes. McLeod Ganj is small too, so no matter which guesthouse you choose, you can visit any of the restaurants on an easy walk. For the first few days, my cousin and I made a point to try a new lunch and dinner spot each day—that was essentially enough time to try them all! Once we had a few stand-out favorites, we spent the rest of the time popping around to each place, chatting with the owners, and downing delicious Tibetan eats.

With so many tasty options, we ate very well. Before a hike, my cousin and I usually packed some brown bread and snacks and hiked around the outskirts of town and into the nearby mountain towns.

4. Stop for a Photo Shoot at the Waterfall 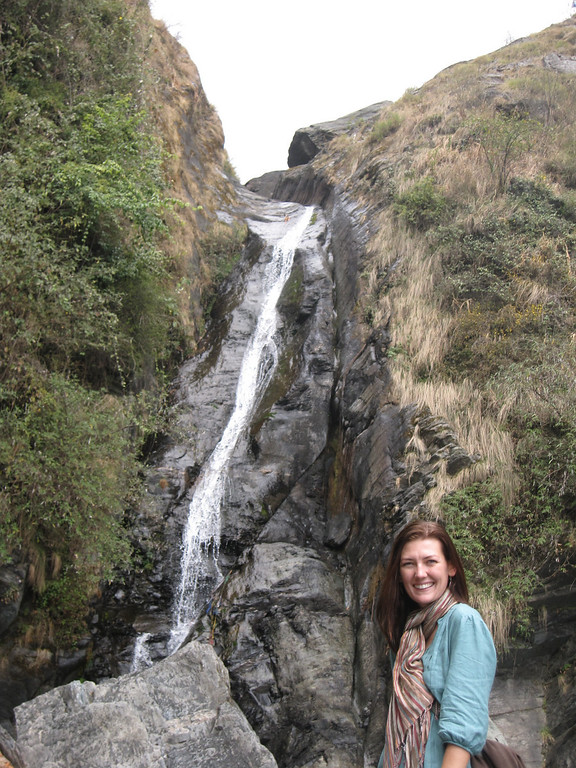 The Tibetan community is slower paced than the rest of India, but it’s still India. On one of our hikes my cousin and I found ourselves back in the spotlight with the locals. We hiked to the small but pretty Bhagsu Waterfall outside of town and found ourselves a delightful novelty to the Indians also hiking to the waterfall. I had a mini photoshoot with a few hikers, and then laughed my way away from their group.

After the first impromptu photoshoot, I was still surprised when I was accosted for a second photoshoot with a large and boisterous family. There must have been 12 members of the family. They swarmed us, but in a much more fun and interactive way than the slow stalking at Gandhi’s Ashram when I had first arrived. Once my cousin and I agreed to take a picture with family’s children, the mother of the group decided to gather the whole family together. It was so funny. They all jostled us around so that they could be touching some part of us during the  picture. After they snapped a photo on one camera, the mother would grab our arms in a death grip to hold us in place. She wanted to ensure that we didn’t flee before we had posed for a full lineup of photo in various arrangements. The family gave us a good laugh, they were genuine and friendly, but they would have never let us leave, so we did a walking backwards departure after ten minutes. There were lots of hugs, smiles, and waves until we rounded the bend and my cousin and I fast-walked out of there! 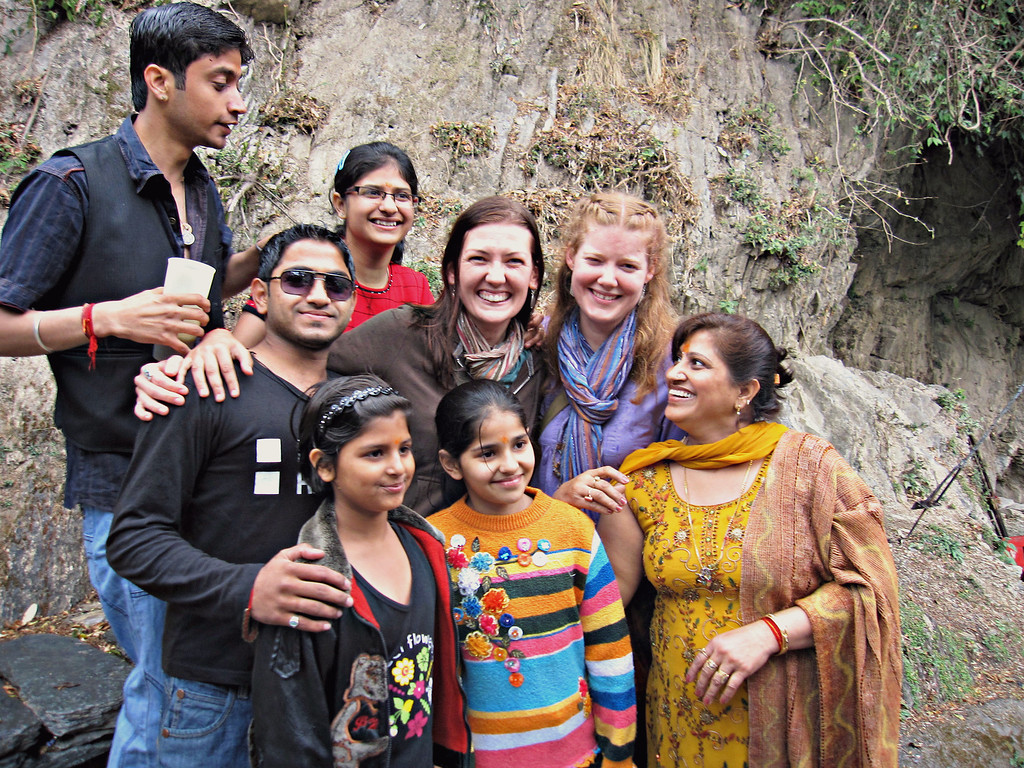 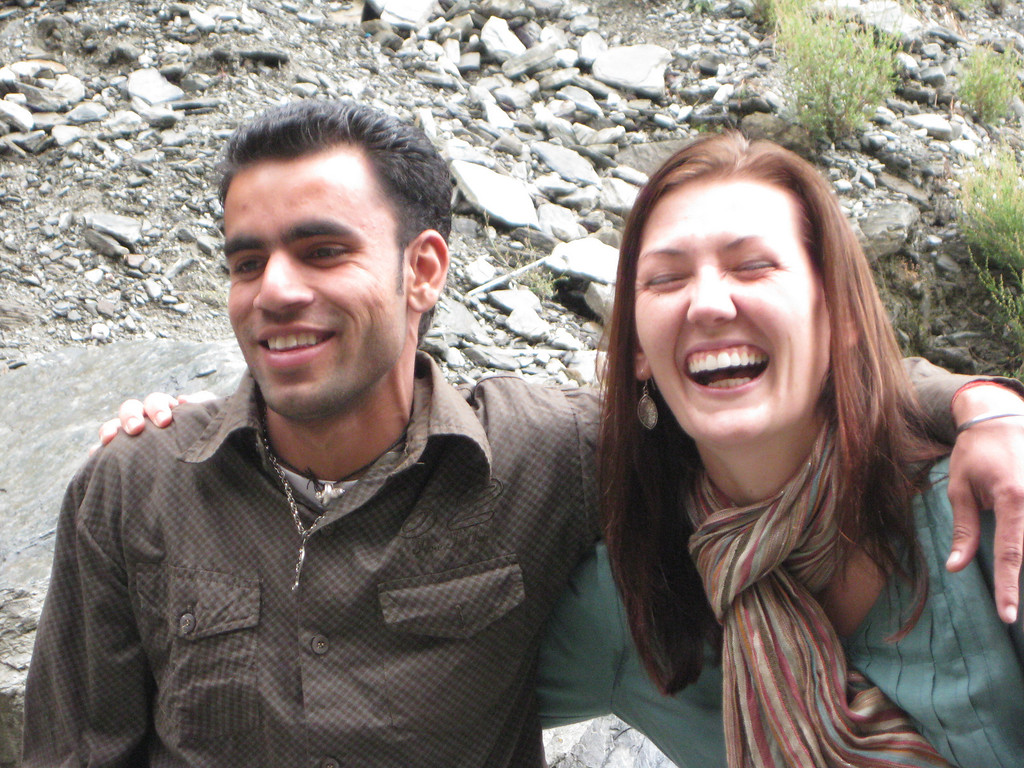 With a good amount of time on our hands in McLeod Ganj, we signed up for a cooking class. I have eaten my weight in Tibetan momos these past weeks in India’s north, so I decided to learn the process with a hope that I can make them myself when I’m back home and longing for the flavors. The class was simple and a fun way to pass the afternoon. Sanji Tashee taught two classes each day with several different lessons. Now, there is a great vegetarian cooking class on offer at Lhamo’s Kitchen that comes highly recommended.

For my class, of course I only had eyes for the class that took me through the momo process from start to finish. Traditional vegetarian momos have just a handful of flavor combinations. There are: spinach and cheese; cabbage, onions and veggies; mixed vegetables. 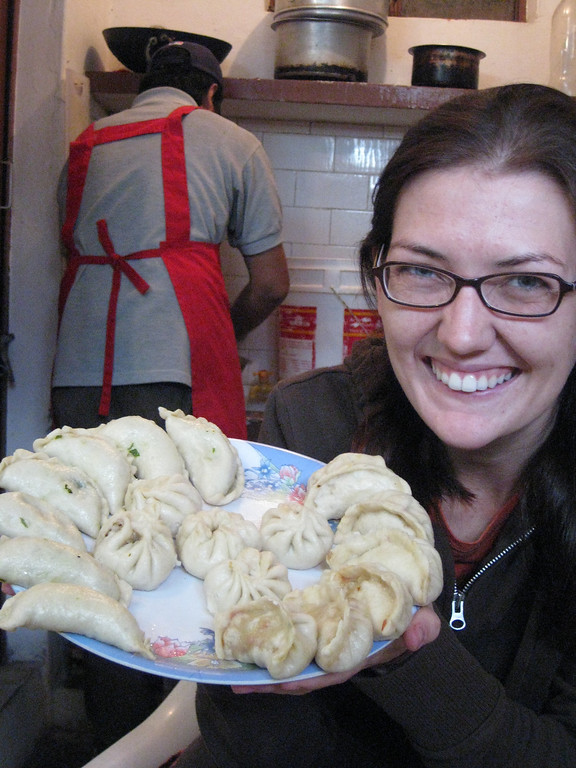 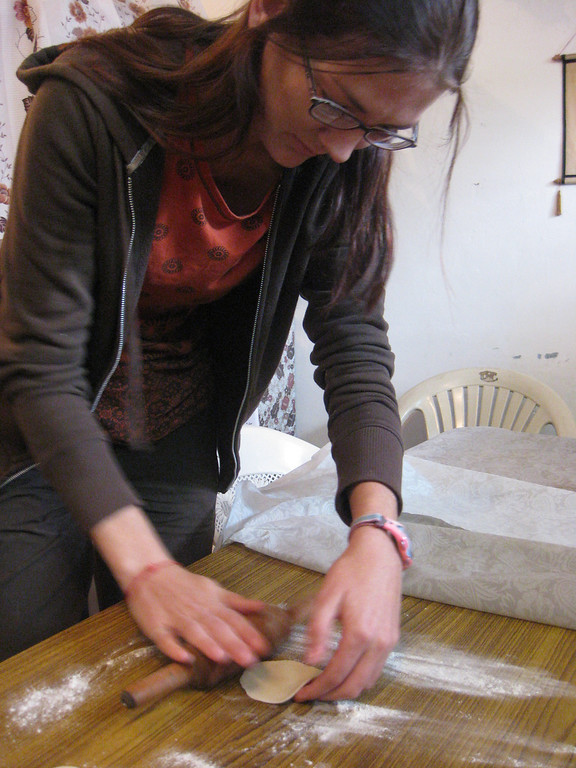 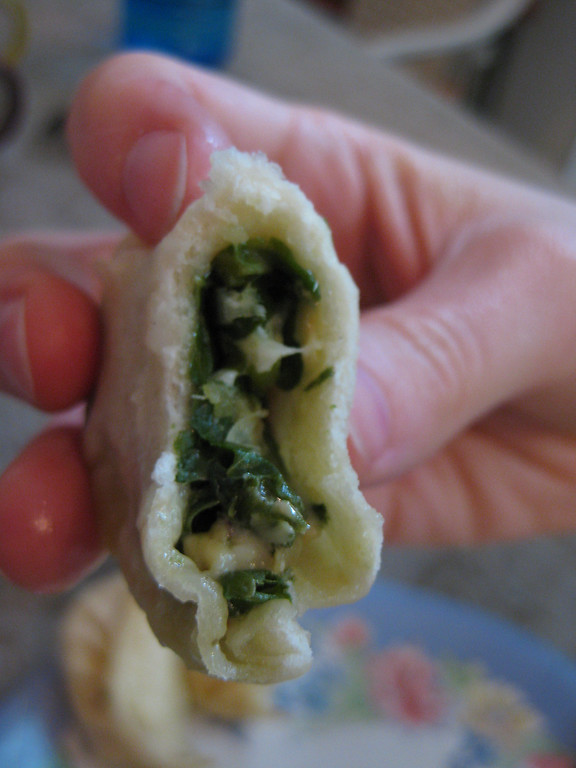 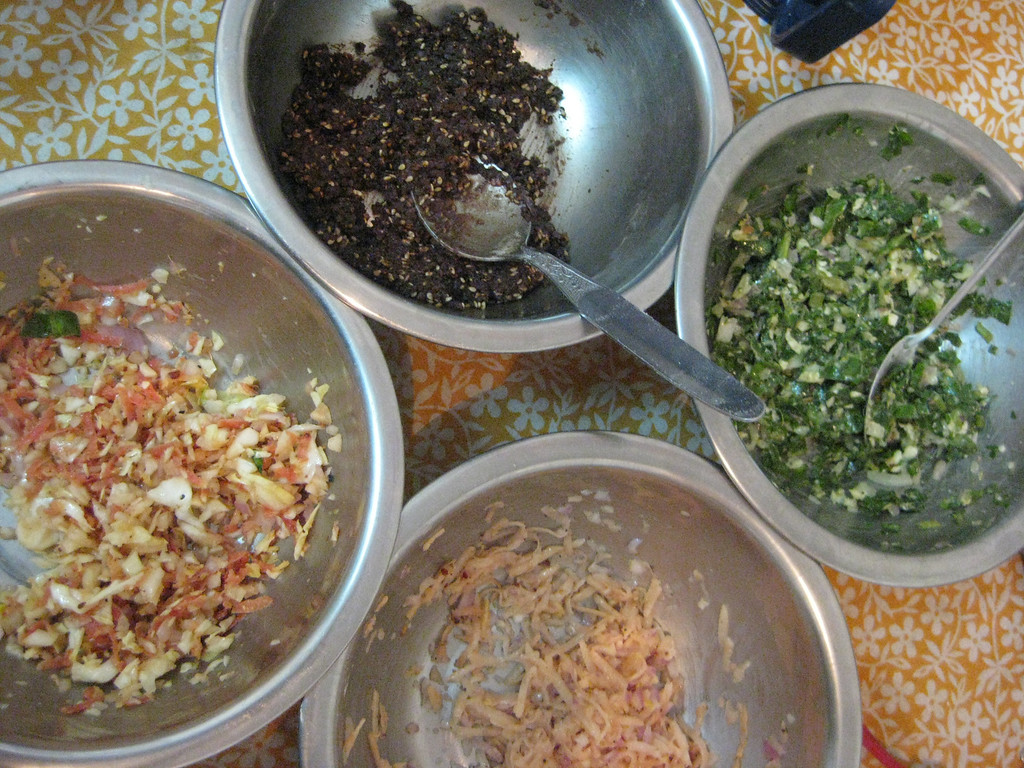 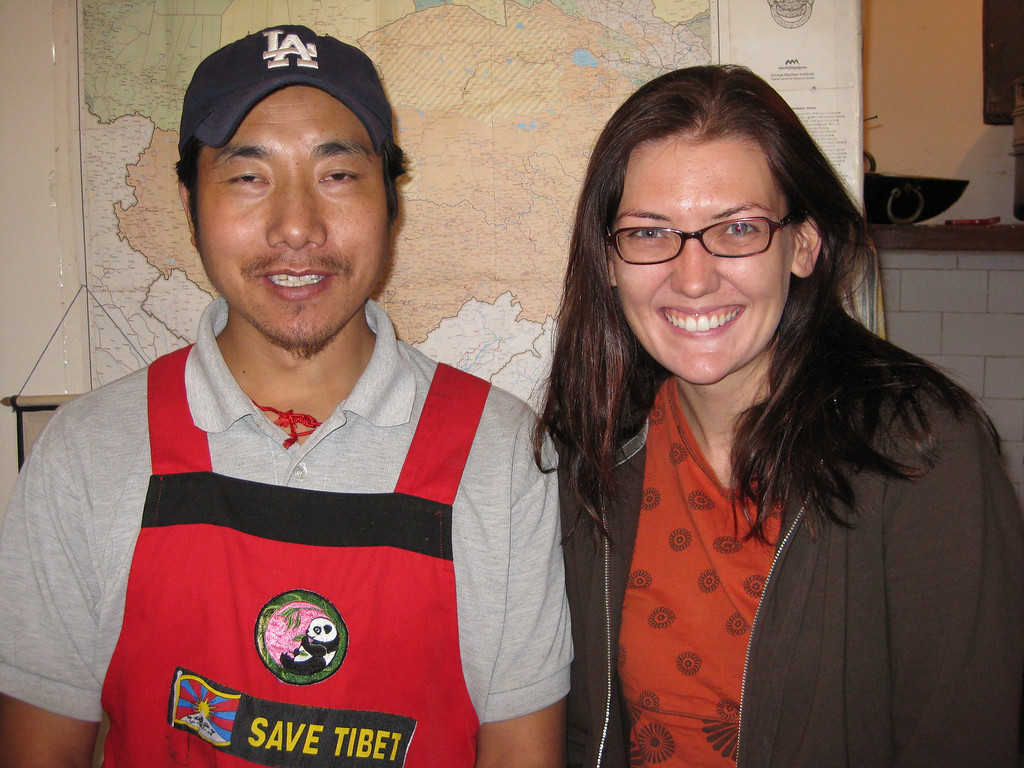 The real treat turned out to be my favorite of the three—a chocolate momo! This is definitely not a traditional Tibetan momo, but Tashee knew his audience well. He won my undying affection with the delicious combination of cocoa, sugar, and sesame seeds all steamed in a dumpling shell. Unbelievably good.

And one of the coolest parts was learning how to roll out the momos, stuff them, and then how to fold them into pretty little dumpling shapes.  Between the Laotian cooking class and now with the Tibetan momos, friends and family back home can expect a special international cuisine night when I get home. 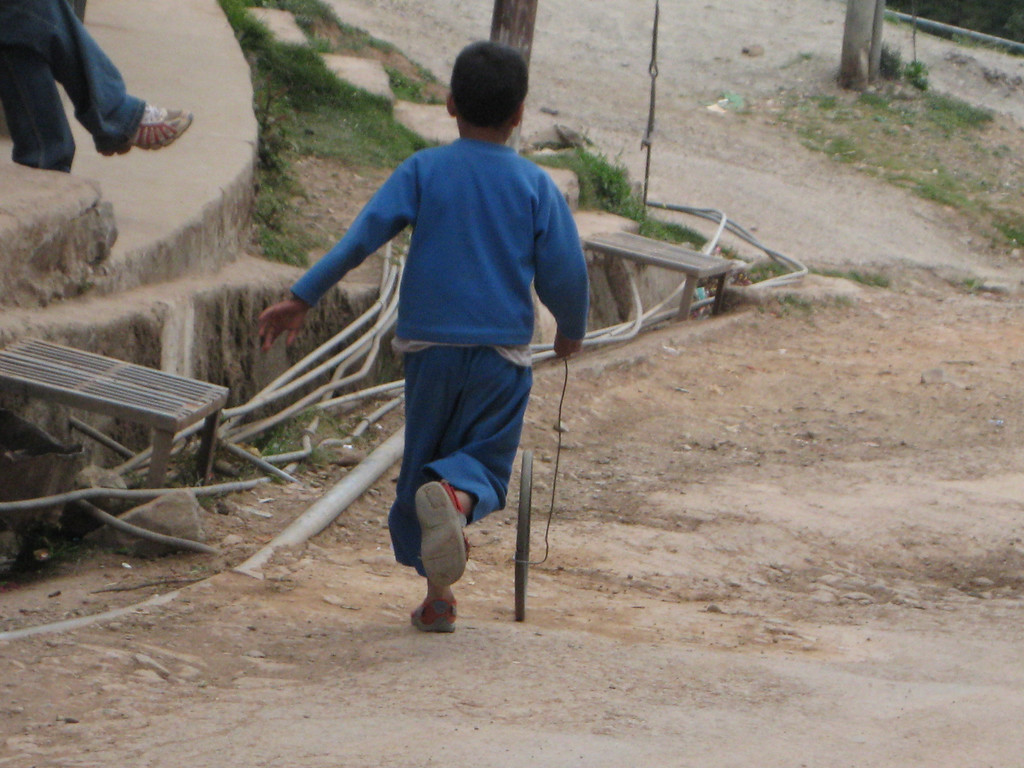 6. Enjoy the Relaxed Pace of Life 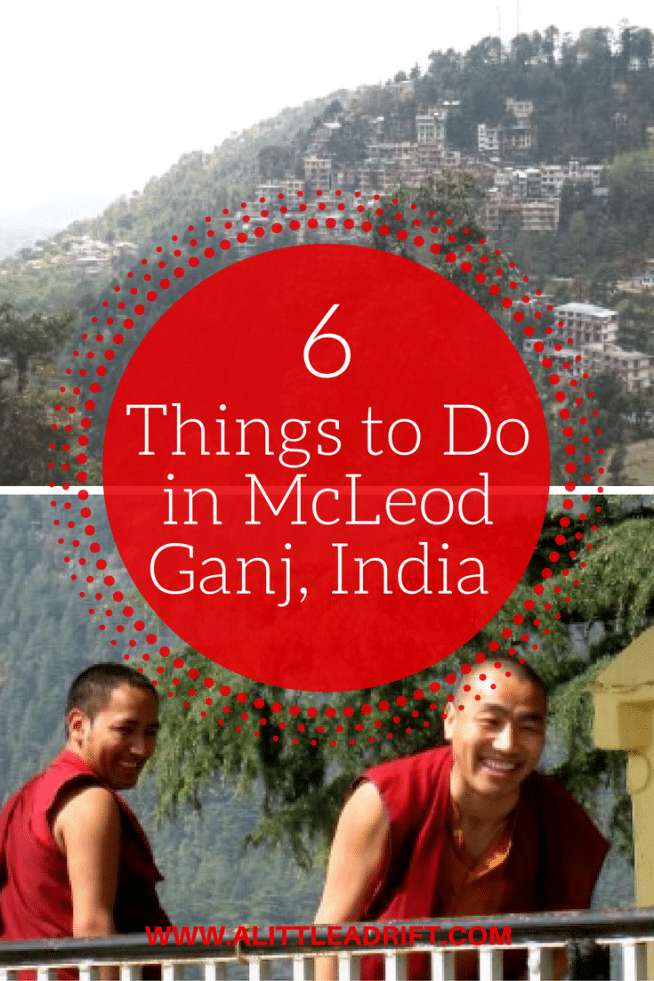 Take time to sit and drink tea at the tiny coffee shops. Browse for souvenirs in the shops and street side stalls. Accept a cuppa chai tea when you’re invited.

In short, McLeod Ganj is not the place to stick to a frenetic pace of life. The Tibetan community brings a calming influence to the city, and a spiritual one too. Many foreigners take classes in yoga and meditation nearby. Others are there for the same reasons I found myself enjoying McLeod Ganj—simply to enjoy the pace of life. It’s a pretty little city, and one unlike anywhere else in India. In the foothills of the Himalayas, it’s the perfect spot to enjoy some hikes

Reading: The Inheritance of Loss by Kiran Desai

Where Am I Really? Just arrived in Italy after four months in South Asia. I’m indulging in heaps of gelato!

Music: Matchbox 20—listened to three of these albums for the train ride south from Milan.  :)

2 thoughts on “A Little Lhasa… 6 Things to Visit in the Tibetan Town of McLeod Ganj, India”