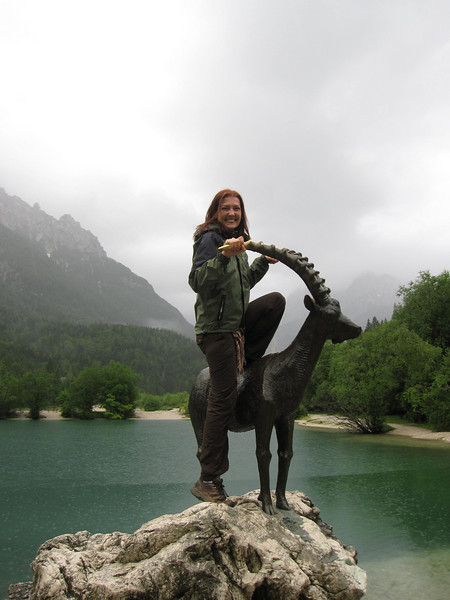 Our tour guide boldly announced that if each member of the tour group rubbed the golden goat, that the rain clouds and dreary weather would dissipate. That was the only impetus I needed to scramble onto the statue and rub it with all the vigor of a Lady Macbeth removing the spot. I desperately wanted warmer weather since we would hike, raft, and generally be outdoors for the entire day.

My cousin and I booked an organized tour instead of organizing it ourselves because it had been raining for a week straight. We had wanted to a chance to immerse and enjoy Slovenia’s nature in the north, but we would need help if we hoped to see even half of the things. The Emerald River Adventure day tour was pricey (like, way out of my budget), very long (a whopping 12-hours door-to-door), but the company is top-rated and other backpackers raved about it when we crossed paths. And how could I miss the opportunity to hike the highest peaks in the country and raft one of the most stunning rivers I’ve yet seen?

I couldn’t. I paid up, piled on the layers, donned my raincoat, and ran out the hostel door into the waiting van that whisked us off to our first stop: the Golden Goat. The Golden Goat protects the Triglav National Park and is an iconic spot for any tourists and locals alike. From this vantage point, there is allegedly views of a spectacular snow-peaked mountain rising from behind the goat. But I wouldn’t know. The entire day started as oddly reminiscent of my sad hike through the Himalayas — the drizzling weather refused to clear as we made our way into the mountains. 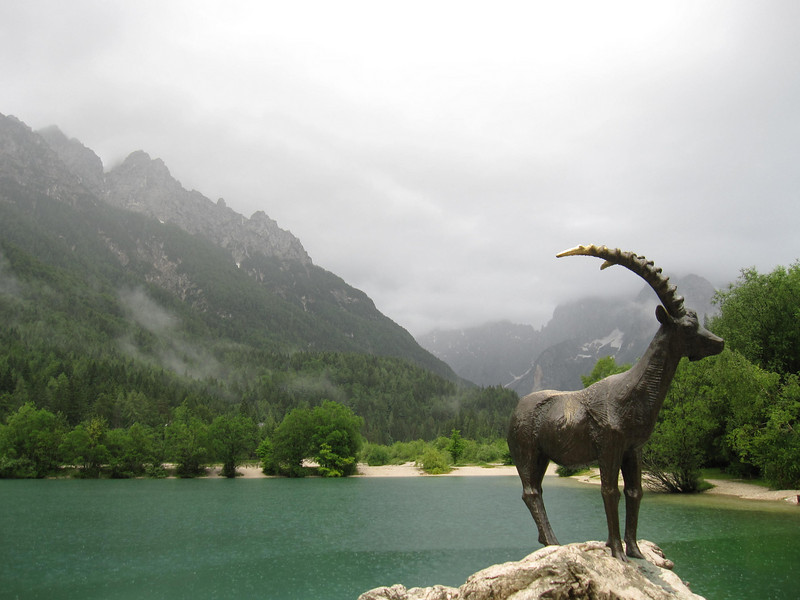 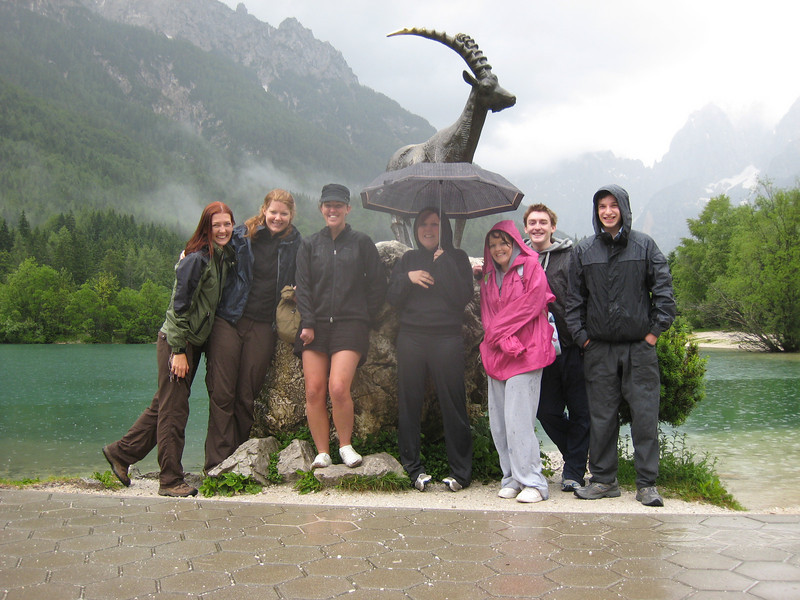 The drive into Triglav National Park is terrifying; nearly a hundred numbered, sharp hairpin turns. I’ve now lost my lunch in a dozen countries around the world, so I was hoping not to add Slovenia to the list. I traded places with the traveler in the front passenger seat  after the first few turns and managed to keep my breakfast down.

A numbing, cold rain misted over us as we slogged up the mountain path to more sad vistas. This wasn’t my first rodeo — I hiked for days and days in Nepal with nary a mountainscape in view, so I knew how to make the best of the day. I realigned my expectations and hoped that we would, at the very least, have a run time rafting later that day.

Most of the day trip is structured around the gorgeous Soča River, which originates in Slovenia and is the most unreal color I’ve ever witnessed. The source of the Soča is a small, gushing blue-green hole between some rocks — it’s pretty but not all that spectacular unless you consider the ridiculousness that it takes to actually reach this spot. Our guide led us on one of the most dangerous hike/climbs that I have been on to-date, especially if you consider that it was drizzling during all of this, making the rocks exponentially more dangerous.

To get to the mouth of the river, I climbed on all four at points, scrambled over rocks, and then flattened myself against the cold, gray, wet rocks with a death grip on the only thing keeping me from falling down into the Soča: a thin steel cable drilled into the rock and marking our lightly-worn path. I asked my guide if anyone dies on this route, and he assured us that no one from the day tour has died, only stupid tourists taking the trip solo — only a mildly reassuring answer, really. 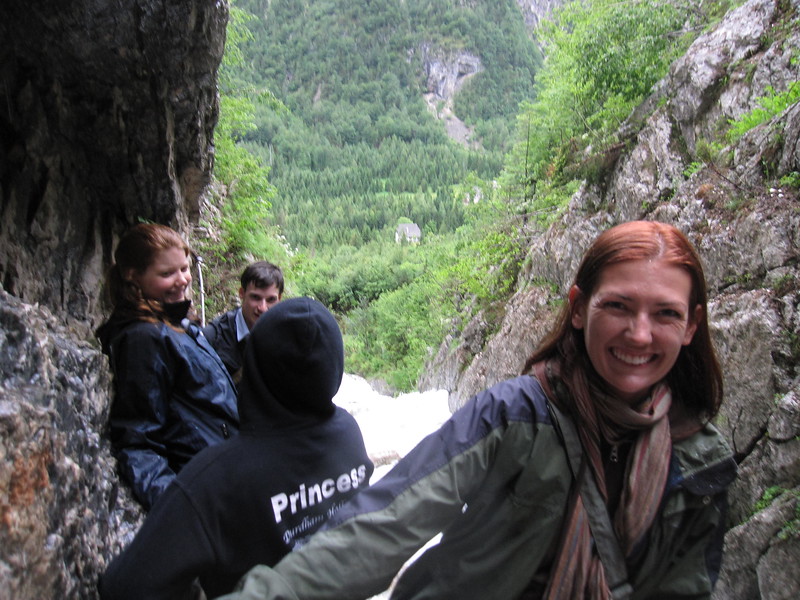 During lunch, the golden goat answered our frenzied rubbing because the sun peeped through the clouds and the temperature warmed. It couldn’t have been more perfect timing, because we were about to get wet. Really, really wet.

The aqua waters of the Soča River had beckoned all morning and with the sun finally shining, I was psyched for the rafting trip. The rapids were only a Grade III, which felt easy-peasy after rafting the Grade IV rapids in Rishikesh, India!

My guide was fun and personalable. He introduced himself as Oso, but I misheard him and we all went with the mistake, dubbing him “Awesome” for entire day trip. But, awesome he was not — my rafting guide was a sadist. 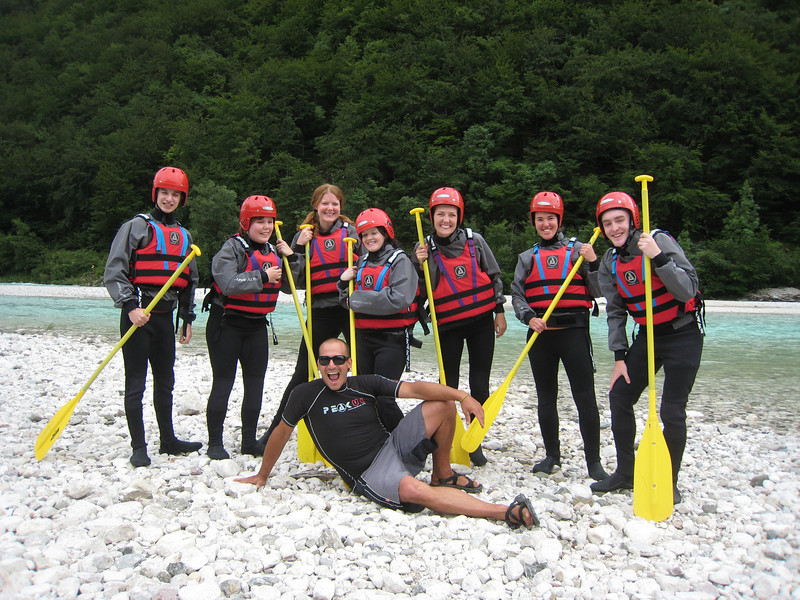 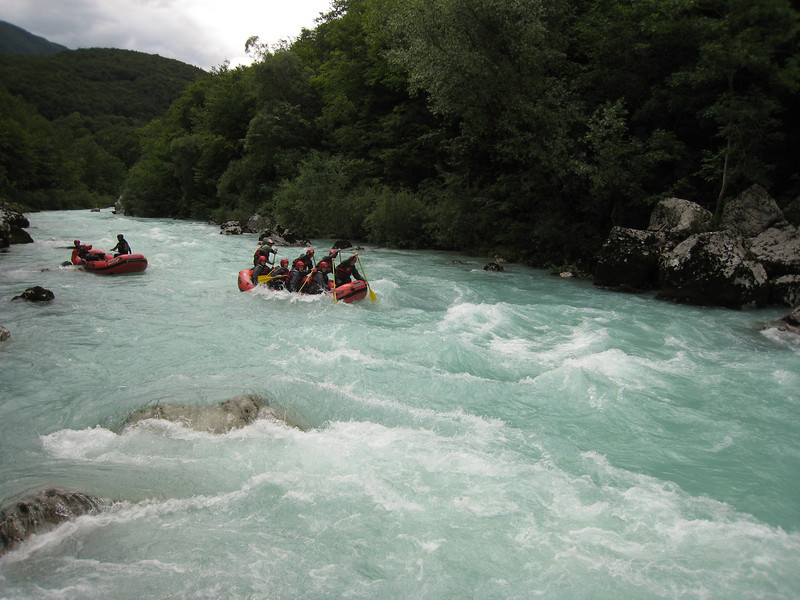 That’s a joke, mostly. Oso tried to dump our rowdy group in the River at every possible opportunity. The first time, it was hilarious because we all fell for it and laughed it off. His trick was to get us to “high five” the paddles just as we entered a dip in the river. With no one holding on, we all fell from the raft into the chilly water. Then, he purposefully went through the easy rapids so that we (and I was in the front position) would eat as much water as possible.

It was all fun though, and meant in good spirit. But, that said, it was cold and my Florida roots when my teeth started to chatter before anyone else in our group. Oso claimed that he dumped us in the river so that we wouldn’t pansy out when it came time to jump off the rocks into the river during one of our breaks And while I still hold fast to the belief that he just truly likes to watch us suffer, there was some truth to his theory. Since I was already wet and cold I was the first person to take a running leap off the tall rocks. Carpe diem and all that jazz, right?!

Another first for me was taking the car-train back to Lake Bled, our starting point. We parked on the train and our guide popped open the cooler and handed us each an ice-cold Laško beer. The best part about the beer? Our lucky goat was right there greeting us from the side of the can! The beer went down nicely after a hard day of hiking and rafting and nearly falling from cliff-faces. We all clinked beers and reminisced over a pretty much perfect day trip, even with the lame weather.