We pick up the round the world adventures in Bateman’s Bay. I sated my curiosity about Australia’s kangaroos with an easy hike around Murramarang National Park, which ended with me petting some kangaroos on Pebbly Beach (and trying to save my lunch from the huge male kangaroos!). Other than the kangaroos, there wasn’t a whole lot of options. With that in mind, I scheduled myself on the next bus down the coast and headed toward Merimbula. All during these kangaroo and bus ride adventures, I had no idea that a major storm was brewing in northern Victoria, which is precisely the trajectory of my travel route as I head toward Melbourne.

Basing out of Merimbula, I enjoyed a long morning walk on a Broulee Island.  This is a wonderful way to spend the morning. Broulee Island has a 4 kilometer beach walk that is serene and quiet. The word “lovely” sums up my wander through this non touristy beach area. If you’re in Merimbula as well, I recommend you take a bus or a car for a long morning wander that way. At my hostel, I met two Israeli brothers with a rental car. They invited me along and the morning my bus left, I used the beach as a place for a thoughtful, pretty walk filled with gently lapping waves and squeaking bird life. 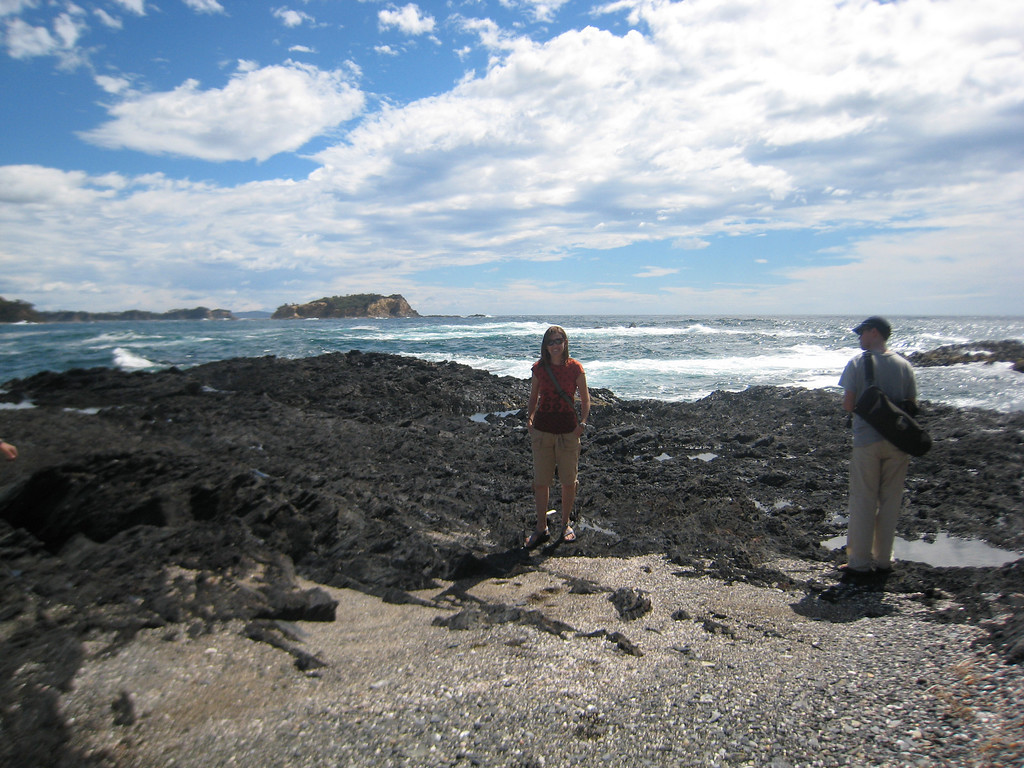 The hostel in Merimbula, Wandarrah Lodge, was cute and it’s a solid option in the city. At the time, they didn’t have wi-fi, but they do now. But without wi-fi back in 2008, I was limited in my ability to stay for more than a night. But what a cute spot. One of my favorite hostel environments. Wild birds frequently visit the hostel porch and they will munch bird seed right out of your hand during breakfast! The birds loved apples and fruit the best, and it was delightful and to start the day with a Rainbow Lorikeet eating from the palm of my hand.

As much as I enjoyed Broulee Island and the hostel, visiting Merimbula was a bit of a bust. The bad weather swept through with gusty winds and cold rains, so I caught the Greyhound bus down to Lakes Entrance to wait out the storm with my two German friends, Pauline and Linda. In retrospect, I should have waited out the storm in Merimbula. My quick three-hour bus ride to Lakes Entrance instead took a very long six-hours. The massive storm came in fast and had knocked numerous trees into the road. We were often just stuck in the bus as rain pelted the windows and we waited for emergency crews to clear the road.

The Lakes Entrance became my hideout from the bad weather, and I was so glad to have made friends by this point. Pauline, Linda, and I decided that the only acceptable way to wait out a storm of this magnitude was with plenty of food and a stack of DVDs. Unfortunately, we didn’t have any of the above. We packed on the layers — virtually every article of clothing I packed was on my body. (And a hearty thanks for the warm scarf Lisandra! It came in handy.) Once we were kited out in the our rain gear, we walked 15 minutes into the Lakes Entrance town center. It was drizzling frigid mist into our faces, but the trip was worth it. When we returned, the trip was successful. We had all the fixings for a delicious quiche (which we only slightly burned), mini pies, and a stack of DVDs. The perfect backpacker activity for passing time? DVDs! Pauline and Linda weren’t traveling with a laptop, so we were thankful for my laptop, which allowed us to huddle on a couch and watch the DVDs we had rented. We opted for a few standbys that we had all seen and loved, as well as some local movies about Australia.

We rented Rabbit Proof Fence, an Aussie movie about what is called the “Stolen Generation” — when the European settlers confiscated Aboriginal children who were mixed with European genes and mainstreamed the children into Western culture. It was a massive debacle that did not bear out well in history. The Europeans aimed to breed out the Aboriginal genes in these kids by mainstreaming them and then marrying them back into Western (white) society. I have been reading the book, so it was interesting to watch it on-screen. I loved them both and recommend that you read it and watch it too. The story is a remarkable true story that explained a lot about the process, the impact, and how one set of siblings survived despite the circumstances. There are deep tensions here in Australia. I feel them at odd moments and as an undertone to conversations with locals. Many Aussies I have met don’t have kind things to say about the aboriginals, so it’s important to read widely on the history between the two groups.

The movies worked well to pass the time. We watched Big Fish, Chocolate, and a few others. After about 24 hours, the storm began to clear and we explored the town. There is a pretty 3.5 kilometer coastal walk of Lakes Entrance, and since we were feeling stir-crazy we donned our raincoats and braved the light drizzle.

The Lakes Entrance is truly beautiful. The town is situated on the lakeside and then, just a couple hundred meters over the sand dunes, the ocean waves beat at the shoreline. The gap in the picture is man-made and allows boats to dock in the quiet waters of the lakes rather than the rough ocean.

We were awfully glad to see a bit of sunshine, even if it was still overcast most of the day. The storm had passed and we enjoyed the town. I just have to add, we did, once again, get a little lost. 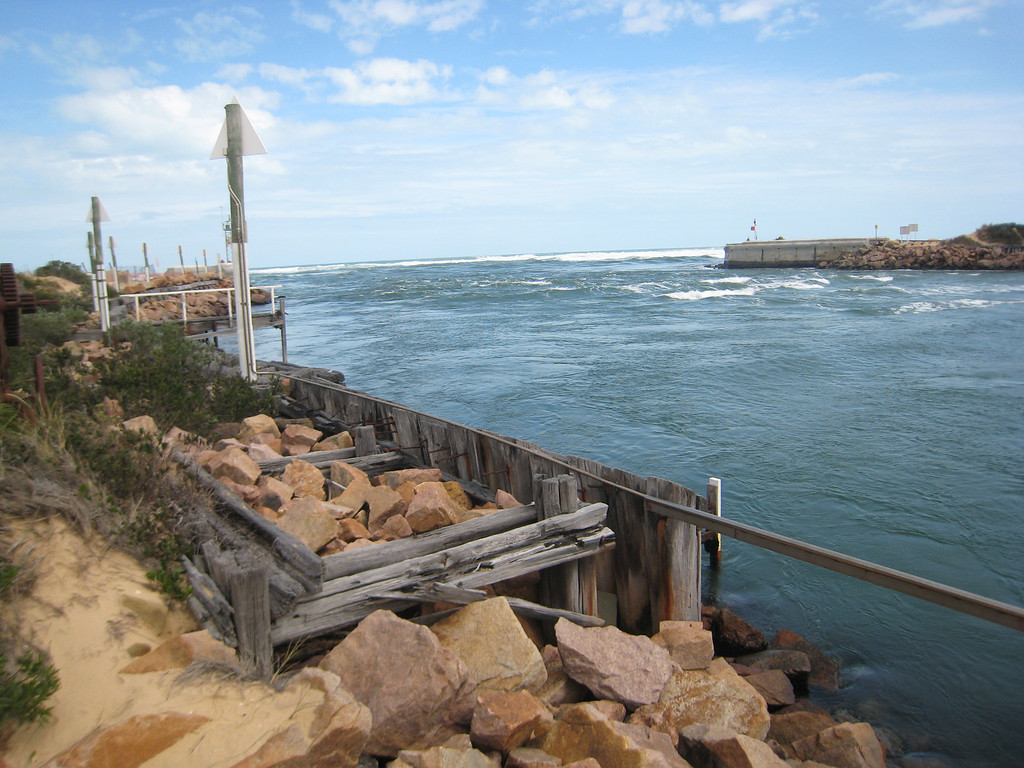 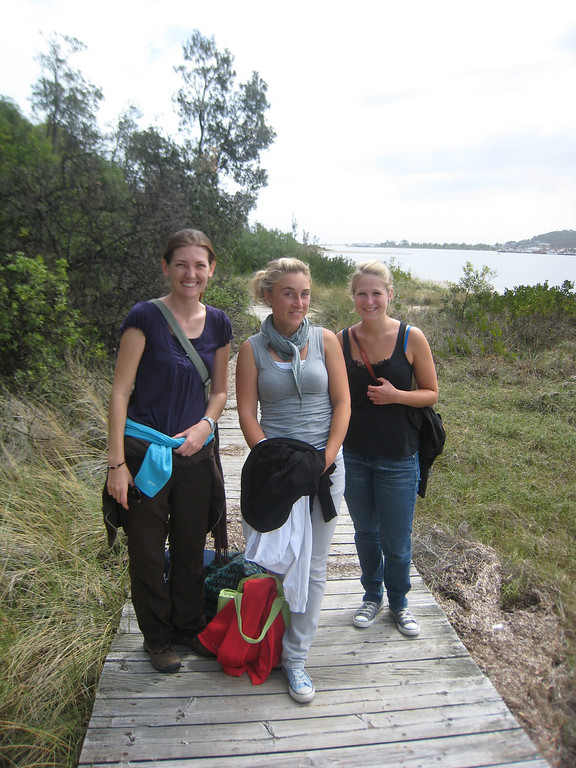 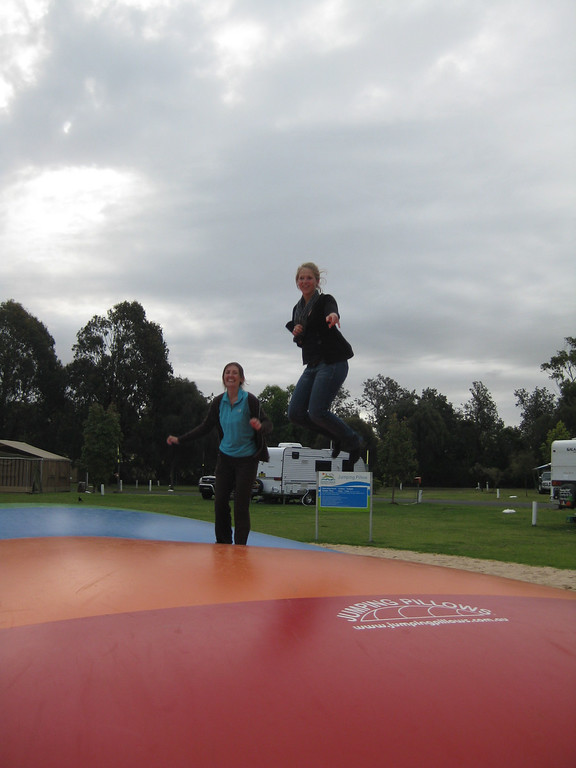 Our planned walking route hugged the coast for two kilometers and then cut back into town. After about five kilometers of chatting and getting lost in conversation, we realized we had walked too far! We cut inland to a golf course and the extra detour turned out all for the best — I got to see a jumping pillow!

This pillow was just sitting there asking for us to jump. The German girls have these pillows in Germany too, but I’ve never seen anything like it. We have trampolines with huge nets around them, but never at a public park. Best I can figure is that it’s because the U.S. is so lawsuit happy. I got my jumping on, however, and it was such fun. It was even fun enough to make worthwhile the extra six kilometer walk!