After nearly three weeks traveling Australia, I was disappointed that I had not yet seen any kangaroos or koalas in their natural habitat. I’m pretty sure that somewhere — guidebook, tourist poster —  I was promised a land overflowing with them both. Right? Well, the reality is that even these smaller towns along the South Coast are developed enough to keep the kangaroos far from traffic and fenced yards.

Seeing the quintessential Australian animals was one reason I decided to head south from Sydney along the coast of New South Wale. I had hoped it would be easy to see them in the fields, along the roads. Well, that’s not exactly the case. And I have seen both of these animals, but they were in captivity at Sydney’s Taronga Zoo. I’m not a huge fan of zoos and far prefer spotting these animals in the wild when possible.

But after traveling through a slew of South Coast towns — from the bigger cities to the smallest of towns — I had given up my last bit of hope. And of course, that’s when I spotted a sign at my hostel. I am in Bateman’s Bay this week, and there on the wall the owner detailed a small, easy day hike through Murramarang National Park . The entire hike takes a few hours and she suggested that we pack a lunch. And the best part — it ends at Pebbly Beach, a spot that they love. The hostel-owner nearly said that kangaroo sightings are nearly guaranteed.

For a mere $20 AUD (though a bit more than that in USD at the current exchange rates) the sign advertised that the owner would drop me off at the beginning of a three-hour hike. The hike runs through the lightly forested trails of Murramarang National Park, then the trail spits out Depot Beach. From there it’s an easy walk along the coast to Pebbly Beach. At Pebbly Beach we bond with the wild kangaroos and wait for her to pick us up three hours later!

The entire prospect thoroughly thrilled me, so I peeled a crisp bill out of my wallet and coughed up the cash for the kangaroo sightings.

I convinced Daniela, a German girl also staying at the hostel, to take the hike as well. I promised her a brisk day of lightly hiking followed by kangaroos. She also hadn’t yet seen the kangaroos in the wild, so she joined. On the morning of our hike, the hostel owner gave us a map of the National Park, brief directions, and the she actually told us, “Don’t worry, you can’t get lost.”

Well. Let me tell you, I was more than willing to prove that wrong! I’ve mentioned before, but getting lost is the unintentional theme for this trip. It’s even become a running joke. At least, it’s a running joke between me, and well, me. If I was traveling with someone, I know they would be ribbing me about the times and places I get turned around, confused, and downright lost.

So, even with the assurance that it wasn’t possible, Daniela and I got a bit turned around trying to navigate a few of the Park’s trails. They weren’t well labeled and our meeting spot hinged on us getting from Depot Beach to Pebbly Beach. After a bit of head-scratching, we found Depot Beach! But there were no kangaroos, which had me profoundly disappointed. Kangaroo poo coated the beach in tiny, round, brown pebbles — but no kangaroos. And that would have been OK, I mean, we saw beautiful creatures walking through the park. Cockatoos and parrots filled the branches. Rainbow lorikeets darted across the treetops. As we meandered down the beach, I was sure that we had missed the chance to spot kangaroos for the day. 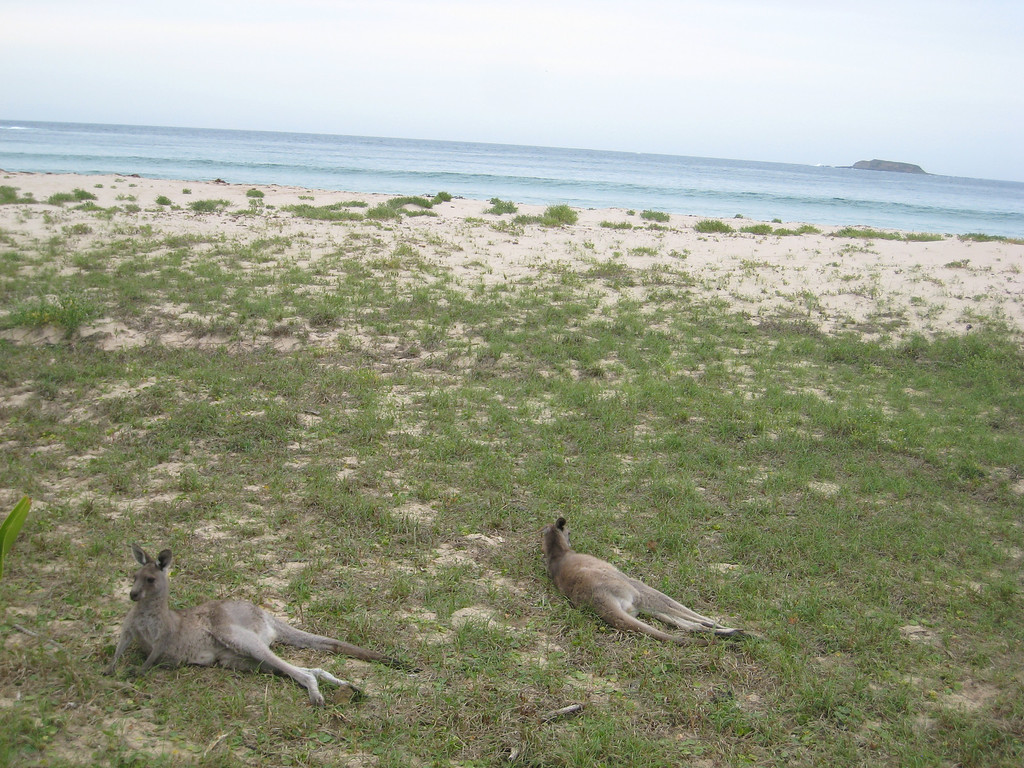 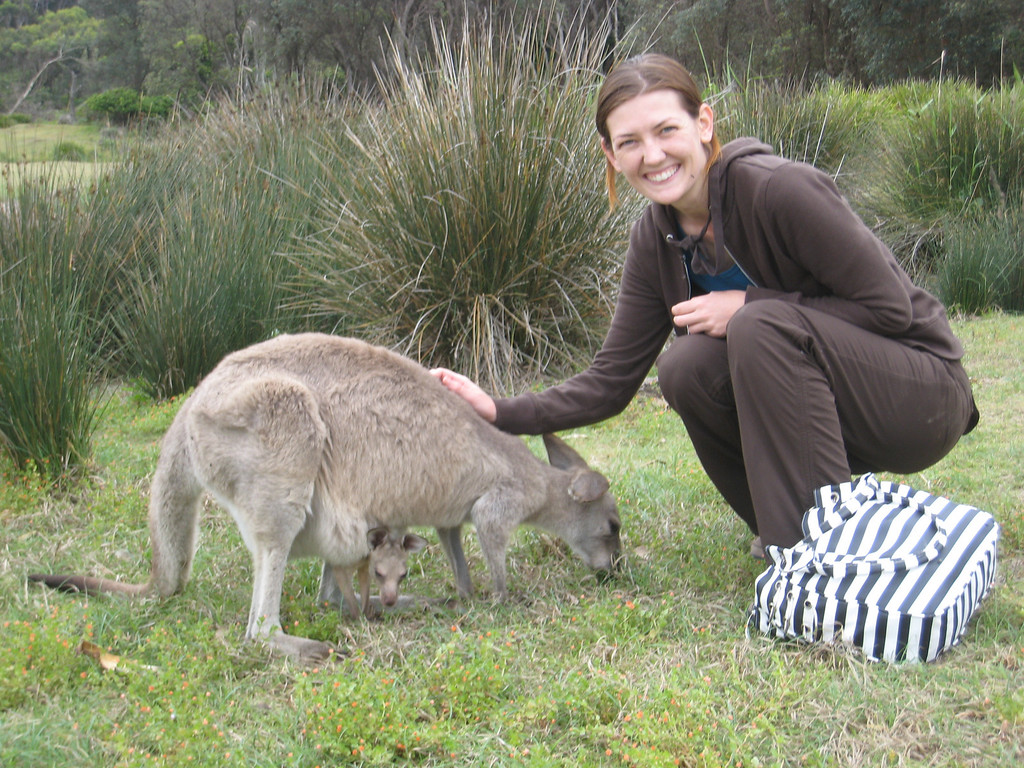 They psyched us out though! They decided to spend the afternoon further up the beach and about 30 minutes later we spotted a large group of kangaroos lounging on what could only be Pebbly Beach, which was aptly named as there was little sand and many pebbles. Even with the overcast sky and greyish weather, Pebbly Beach sparkled. The beach is in a beautiful inlet with the blue sea cresting onto the shoreline. Whales passed across the mouth of the inlet as they migrated for the summer. And there were flies. Oh man, there were flies.

The hordes of flies attacked us by the thousands when we hit the coastline. The flies were the most frustrating and disgusting part of the hike. They flew in your mouth, up your nose, and sat on your head, shoulders, and back as you walked. Within five minutes, we had passed the point where we still thought “shooing” the flies away would have any last and real effect —it was a pointless waste of energy. With the kangaroos so near, the flies are simply an everyday fact of life.

Once we found the kangaroos, it was time to cautiously enjoy their company. We had truly cool interactions with the kangaroos at Pebbly Beach. The kangaroos were in small groups, and the biggest remained aloof from the gatherings. They all seemed intent on their own pleasure; some lounged in the sandy grass, others slowly munched their way across the shrubby beach.

Daniela and I decided to approach one group of calm, small kangaroos. And while a few immediately scampered away, the majority couldn’t be bothered with us. In fact, they scarcely flinched when I pet, posed with, and took pictures with the kangaroos. The only thing that risked our limbs was sudden movements. So long as we kept fluid, easy gestures the kangaroos were content to let us lounge alongside them. 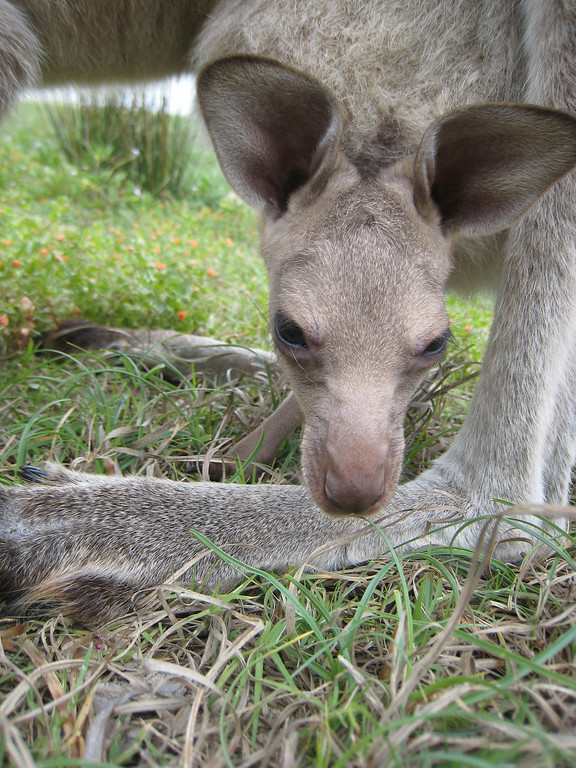 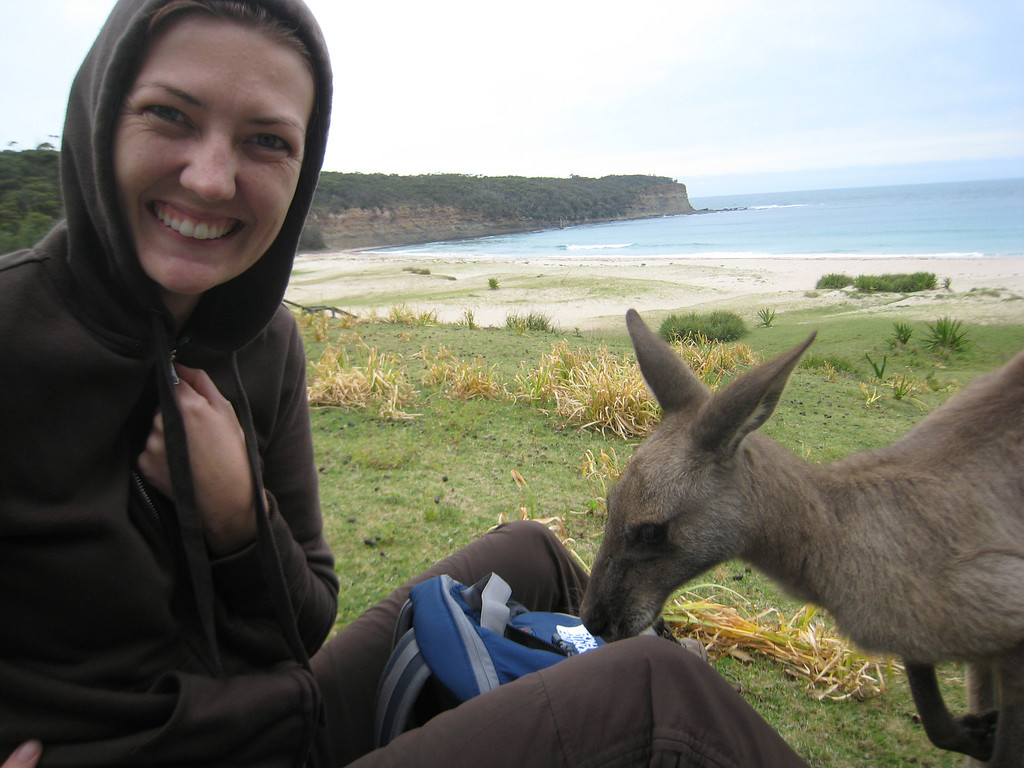 One highlight of the afternoon was spotting a mother kangaroo with her joey in her pocket. The mother was unperturbed by our presence as we pet her surprisingly soft, short fur. I even ventured slowly into the top of her pocket to scratch the baby kangaroo’s head! It was so cute, the joey would lean out of the pouch when his mum bent over and also nibble the grass. What a strange-looking creature though. Joeys are hairless at birth, and this little guy still didn’t have much to offer in the way of fur. But even so, I give him mad cuteness points.

Once we were totally and completely satisfied with our kangaroo interactions, we walked to the opposite side of the beach for lunch. We made a spot on the grassy sand dunes and watched the ocean for more whale sightings. After about an hour of sitting, one huge male kangaroo decided he wanted lunch, too. The hostel owner had warned us to avoid the large males at all costs — they’re more likely to turn on you and inflict unwanted pain. But this one was a perfect gentleman. The video below shows our interaction with the kangaroo, who I creatively named him Mr. Kangaroo.

In Oz, you are strictly forbidden to feed the kangaroos human food because they can’t digest it and it makes them very ill. I made sure to zip my bag tightly closed, which frustrated Mr. Kangaroo. He hopped away after about five minutes. That gave him five minutes, however, of sniffing our bags and using his strong head to nudge our bodies. He was a determined little bugger! I knew to keep it gentle and calm with him, and a few Aussies have since informed me that I’m lucky that Mr. Kangaroo didn’t do me serious bodily harm!

Once Mr. Kangaroo hopped away, it was about time to head back to the car park for our pick up. I was exhausted, but content with my day of Aussie animal encounters. This visit to Pebbly Beach was one giant check mark on the list of things I have to do before I leave Australia. I still have more than a month to explore, but there’s a heck of a lot of country left to see. I thought I would have time visit most of Australia in two months, but I will barely scratch the surface of this gorgeous country.

5 thoughts on “A Little Adventure… Hiking to Find Kangaroos in Bateman’s Bay!”