A constant whirring sounded from deep within the train as the wheels sped across the tracks. Coupled with the constant rocking and the constant intrusions into my train compartment, the overnight between Zagreb and Sarajevo wasn’t restful. Added to that, the customs offers at the border crossing between Croatia and Bosnia have absolutely no mercy. The Croatian border officer marched through the train unsmiling and humorless as he checked passports and issued an exit stamp.

After being stamped out of Croatia, just 25 minutes a sudden blinding light woke me. The Bosnian customs officer entered the compartment and flipped on the overhead lights without warning. But it turned out that as abrupt as we were awoke, the officer oozed charm and friendliness. US citizens do not require a visa to enter Bosnia, so it was a quick and painless process. He was remarkably nice and wholly humored my cousin, who asked that he ensure the Bosnia stamps in our passports were dark, legible and neatly one of the squares designated in our passports. Some officers have listened to my cousin’s polite question with scorn, then stamping haphazardly and tossing the passport back to us. This officer wasn’t phased and was happy to chat and comply with our silly little request.

My friend had left earlier in the day from the train station as well. While we left Zagreb, Croatia going south and a bit east into Bosnia, Jenn boarded a train bound for Venice. It was so fun to have a friend join me on my round the world trip. I had last seen Jenn the year before in Los Angeles, when I hugged her goodbye and vowed to find a spot on my travels where she would want to visit. Turned out, Jenn was game to travel through Croatia and Italy and it was a fun three weeks. And so, as Jenn headed to Venice and then home to the States, my cousin and I ventured into Bosnia, a country associated more war and conflict than tourism. 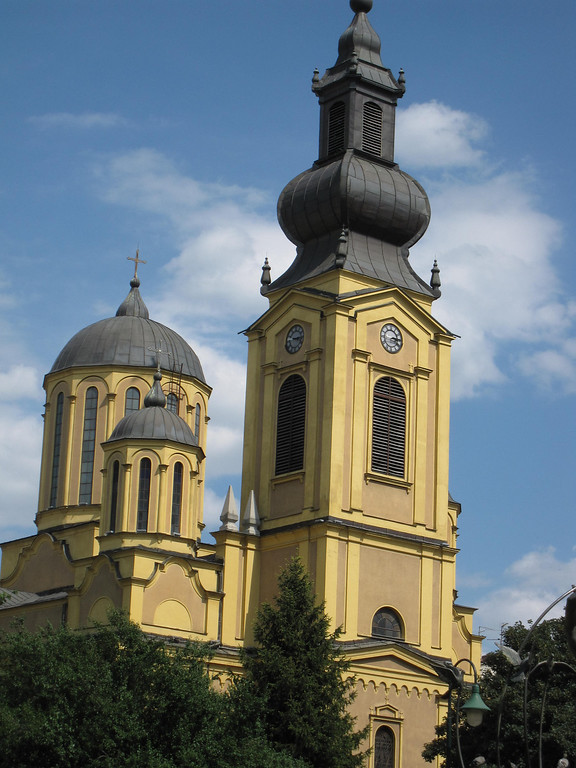 Sarajevo’s train station appeared across the lush green landscape around 6:30am and I was excited to start this leg of the journey. I added Bosnia to the itinerary at the last minute because my cousin decided to continue traveling with me, and she had a friend in Bosnia, Amir, who had lived in her small town as a high school exchange student years ago.

We knew that we would visit with Amir while in Sarajevo, but we also wanted a chance to see an alternative side to Sarajevo. We lined up couchsurfing in a flat with young college students. Although I had previously hosted couchsurfers while I lived in Los Angeles — and I met up with one of the people that I had hosted when I traveled through Australia — this was my first times as a surfing with unfamiliar hosts. Our host for the weekend, Furkan, is a Turkish student living in Sarajevo for the past two years and attending the international university.

These past few weeks I have traveled rapidly and never quite had the time to research Bosnia travel to get a handle on what to expect. And that was unfortunate. When I tried to grab breakfast at the train station, I discovered that there was nothing vegetarian on the menu. Although the server didn’t have much command of English, with wild gestures and using cognates in other languages, my cousin and I communicated enough to manage a plain cheese and bread sandwich. This didn’t bode very well for easily finding vegetarian food in the county.

On the cab ride to Furkan’s apartment, I peeked from the window for my first glimpse of Sarajevo. It’s a small and charming city despite the tourism and Westernization that has arrived over the past decade. As the cab wound through the city streets, it struck me how close nature and hills lie from the city center. Between the taller city buildings, it’s easy to see the lush, grassy hills on the outskirts of town, each hilltop dotted with red-roofed suburbs.

My first major gaff of the trip actually happened in the cab — having just met Furkan, I was feeling chatty and was eager to share my observations from the past week. Although not a rule, in general I had found the Croatians more reserved and insular, less open to tourists and tourism. In contrast, in the few short hours I had been in Bosnia, the locals seemed infinitely friendlier. Furkan didn’t say much as my cousin and I shared our observations with him.

Once we were safely ensconced in his apartment, he gave us a lesson in local history and culture. There is a large mix of cultural identities in the region, with large populations of Croats, Serbs, and Bosnians. And with the Bosnian War so recently in history, it’s a touchy subject. Bosnia is a large melting pot of these diverse cultures, and Furkan warned us that the situation was too complex for even locals to open discuss. As tourists, we had no nuance or well-formed opinions on it, so he recommended that we never openly discuss anything political in front of others. We had chatted in front of the taxi driver, but we had no way of knowing if he was Croatian, Bosnian, or anything else.

It was a good point and I am embarrassed to have run off at the mouth without considering the impact of those cultural observations within a county so recently out of a devastating warn.

Furkan lived in a shared flat with two other students from the university. Both Furkan and his two roommates had planned out a day of exploration for us. They wanted us to experience Sarajevo from the POV of locals. Furkan, Sidak and Anida did a smashing job showing us around town, and funny enough, they are all foreigners! The three all traveled from their home countries to Sarajevo for a chance to study at the international university. Like Furkan, Sidak is also from Turkey, and Anida is a friendly 21-year old from Montenegro. They shaped our weekend plans so that we could have a varied look at the best that Sarajevo had to offer in just two days. It’s their friendship and help that allowed me to begin to love Sarajevo, the vibe, and all that this pretty city has to offer.

[box]Traveling to Bosnia and Herzegovina soon? Using my own travels and recommendations from A Little Adrift readers, I have a complete and free Bosnia & Herzegovina Travel Guide.[/box]