One question I am frequently asked concerns how I picked my route around the world, and how I decided on the mix of countries I would visit during this yearlong trip. Family members were baffled by my decision to add countries like Slovenia and Bosnia — places they had never really known much about in recent history. I’ll even admit that I would have waffled a little on pinpointing Croatia on a map. But then I grabbed every Lonely Planet off of the bookshelf at my local library, and with that massive stack, the Croatia Lonely Planet offered a gorgeous would of blue oceans and green forests — it looked like a slice of paradise.

The pictures did it for me. Croatia has miles of stunning coastline along the Adriatic, in addition hiking opportunities in the pristine national parks. As a happy coincidence, when I asked my cousin if she wanted to travel with me through Croatia, she confirmed with a family friend and confirmed that, yes indeed, there was a small cottage in on Brać island awaiting our presence for a nominal fee. We couldn’t pass up the opportunity, so we planned six solid days on the island to take it slow and soaking up the sun.

We arrived in Milna, a small town on Brać, after some serious misadventures in travel when we took the ferry from Ancona to Split. We were ready for sunshine and blue waters on the Adriatic.

The problem? There was no sun!

We arrived in Milna during a drizzle. Over the following days, that progressed into a full-out storm. The rain would blow through in waves, however, so would dart out from our cottage for the three-minute walk to the harbor’s edge, where we could buy groceries. With a full kitchen, we cooked warm, hearty food. My cousin prepared a tasty five-bean soup that simmered on the stove all day and made the cottage smell divine.

We spent our first days in Milna cloistered inside, avoiding the wet and cold. We would take brief outings in the evening to stroll the harbor, buy more food, and sample our favorite treat, gelato! 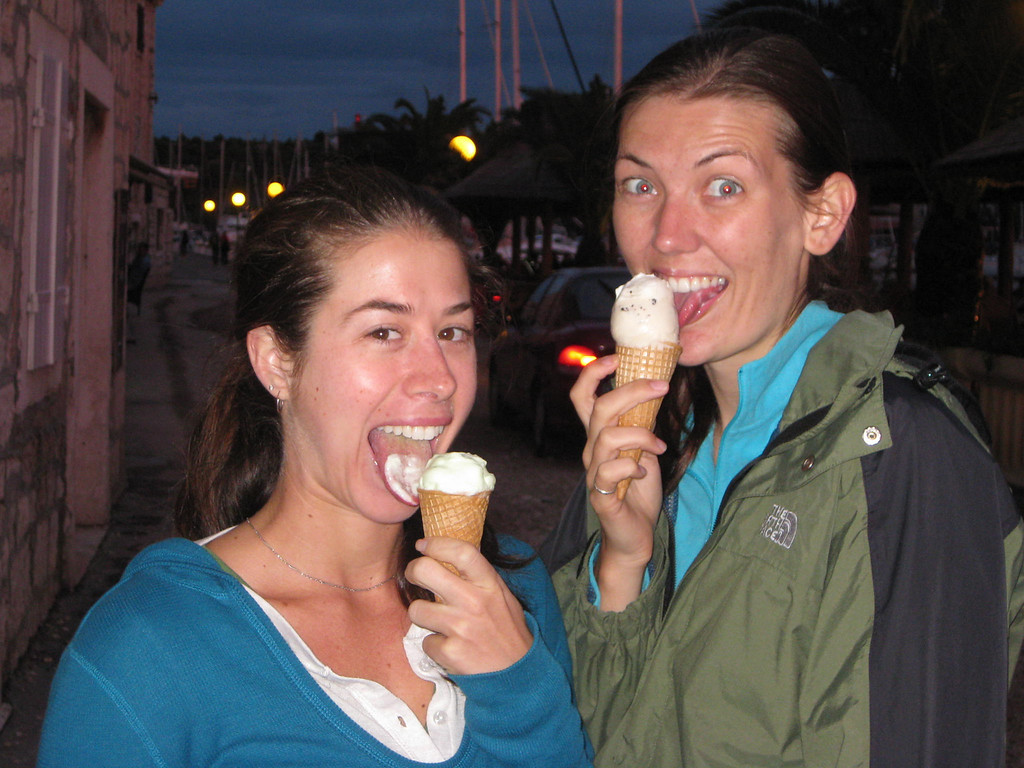 It didn’t take the three of us very long to sniff out the local gelatería. We became instant friends with the owner, and at every parting he gave us a hearty “see you later,” rather than a “see you tomorrow,” because we had made it a habit to buy gelato twice a day. Gelato-man was my savior throughout the days of dreary rain. The sun would shine briefly, and we would all grab raincoats (just in case) and run outside to soak up any possible sunshine and fresh air. We also wanted the exercise since we needed to stay in good shape for the hiking we had planned in other parts of Croatia.

Although we made the best of it, the rain was a bit of a big downer. Jenn had visions of heading back to Los Angeles with a dark tan from hours of laying out on the beach, but she shelved those plans once the storms raged during our first days in Milna. 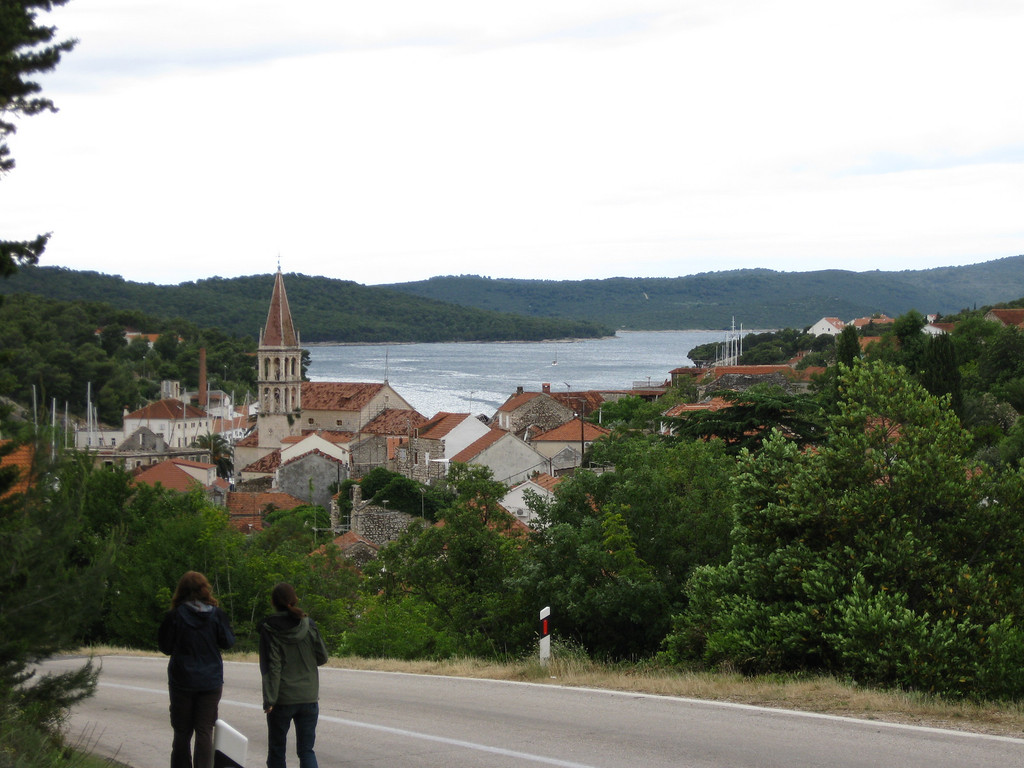 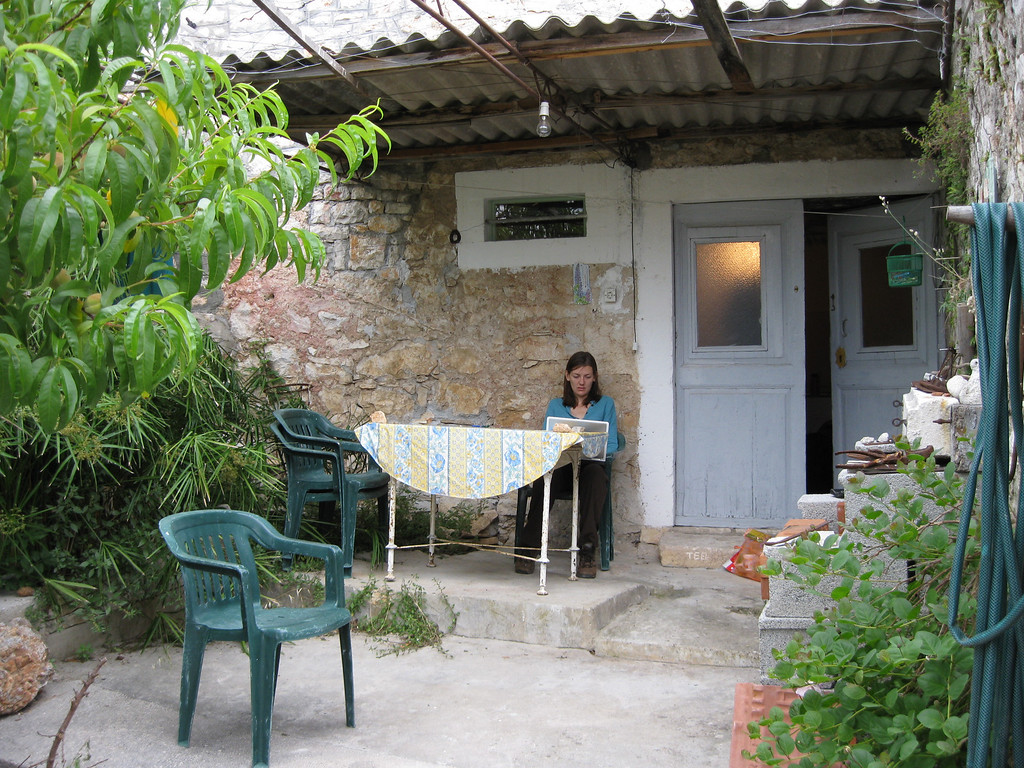 Throughout the rain, we had consolation prizes: internet and home-cooked food. The gods smiled on us because we managed to pick up a Wifi internet signal from the front stoop of the cottage.

The faint signal was available in three key places, and so we camped in these spots those first rainy days. Jenn camped out with her tiny netbook perched on the front windowsill. My cousin sat on the porch with her laptop facing one particular direction. I wedged myself into a tight corner behind the front door, and to access the signal, I actually had to face into the corner like a child in time-out.

We had all taken care of business at the internet cafe before we left Italy, but I was so grateful to have wifi for the week on Milna. Julie, the woman from whom we rented the cottage, told us that we would have to walk 25 minutes every day and pay huge fees to access the internet on the island — what a a nice surprise to have signal to help pass the time!

[box]Planning a trip to Croatia? My free Croatia Travel Guide shares advice, tips, and suggestions for anyone traveling and backpacking Croatia.[/box]