I left Agra in the dead of night with the promise of a golden temple on the horizon when I awoke in Amritsar, India. My cousin and I had a wild few weeks journeying north from Mumbai. We marveled at the palaces in Udaipur, the camels and monkeys in Pushkar, the colors of celebrating Holi, and the splendor of the Taj Mahal. Most of this adventure took place in the Indian state of Rajasthan. This is a tourist-heavy part of India and, from what I hear, one of the harder regions to travel. The population is dense and tourists are a fascination and a source of wealth. But heading north, my cousin and I hoped to find a different pace of life in the mountains of northern India. And we weren’t wrong, it’s an entirely different part of India both geographically, and culturally.

My cousin and I visited Agra on a fly-by visit, only spending one day in the city to visit the Taj Mahal, and then we planned to sleep on the overnight train to Amritsar. While this is easy in theory, it also meant that we we after spent several hours loitering in the train terminals waiting for the train that was, naturally, late. Before I get into the Golden Temple visit, let’s take a brief detour into what it’s like to use the Indian trains.

Indian trains are either exactly on time and you rapidly board the train on your merry way. Or, as if often the case, you to spend several mind-numbingly dull hours staring at the train-tracks while Indians in your vicinity watch your every move. Watching fair-skinned tourists a pastime for locals. It may even be elevated to a sport. They expect a show and a entertained by even the smallest acts — like buying a chai. But, I am an actress and there’s a craving for more drama than just a mere chia. Sometimes, I just read a book. But other times, I’ve started to come up with fun ways to entertain those who watch my every move as I wait.

With the lyrics to a Bollywood dance hit now stashed in my repertoire — thanks to the dance parties at Tulsi Palace in Pushkar — I’ve decided to just dance. When the starring starts to grate, or if I’m bored, I’ve instead treat the platform like a stage, sometimes I grab a toddler, and I bust out my best approximation of the current bollywood-esque dance moves. I jut my hips, pulsate, shimmy, and circle to the sound of my own tone deaf singing and clapping. My cousin is horrified. But it’s a fun and ridiculous chance to break the ice with everyone else on the platform. And not only do I find this wildly amusing, but it’s a smash hit with those around me. It’s like they had been watching me just knowing that I could bust a move at any moment. And when I confirm their suspicions, they are delighted. Just delighted to join in the clapping and send their kids into the dance circle.

So, that’s what I’m doing when I talk about passing time at train stations. Travel is so much about waiting that this dancing has proven a fun diversion. And as we left Agra, I was happy for the bit of exercise because it was a 17 hour train ride into Punjab, a state in the north. The train bypassed Delhi — I have to leave from there to Kathmandu — and headed straight for Amritsar, a town that borders Pakistan.

Amritsar is home to the holiest temple in Sikhism, Harmandir Sahib, literally translated as “the abode of God,” but informally known as the Golden Temple. Completed in 1604, the temple not only embodies the principles of Sikhism in the the design, but is also designed to welcome people of all religious faiths and traditions. More than walking into a church to witness the beautiful frescoes, the Golden Temple is intended as a place where all can feel welcome and feel a part of what is happening. The daily lunch served is open to all, and more than 100,000 people each day pass through to worship and pay respects. 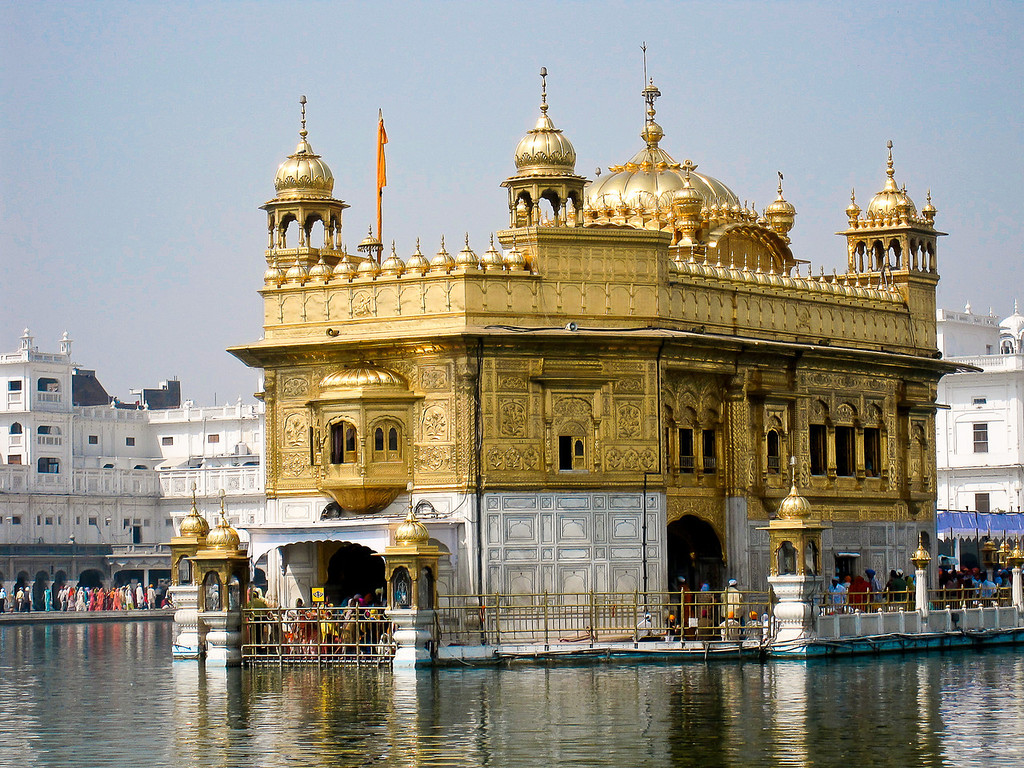 Throughout my time in India, I am reading many books about India as a way to better understand the culture and country, books about India and books written by Indian authors. By the time I arrived in Amritsar, the history and culture intrigued me. While my Lonely Planet India wrote of the a calm splendor of to the gilded temple, it was the history that also appealed to me. Many of the books I have read these past months tell of the unrest that occurred in the 1980’s in this region. There were violent Sikh-Hindi clashes that led to unrest. And this conflict contributed to the death of India’s former Prime Minister, Indira Gandhi. She was assassinated by her Sikh bodyguards because of the military action she ordered within the holy temple. None of the books, novels, and historical accounts have left out the effect of this conflict on modern India.

The information swam through my head as I took a rickshaw from the train station into town as close as I could get to my guesthouse. The rickshaws are forbidden from entering areas of the old-town near the temple because of air and noise pollution. That mean hoofing into to the hotel, then dropping my bag and heading straight to the temple. It’s a holy place and with just a couple of days in town, I wanted to see the temple, understand the process of visiting, and also just relax by the sacred pool surrounding the Golden Temple.

Even without big vehicles, the area around the temple pulses with a frenetic, overwhelming pace. It’s not my favorite Indian city — in fact, I couldn’t wait to leave. But the temple is beautiful and the setting wonderful. I am still learning about Sikhism, there is much I don’t understand, so I took at stance of watching and learning from those around me. It was interesting to sit along the shore and watch the Sikhs bath in the sacred lake. Sikh children of every age were taken to the water’s edge, stripped of their clothes, and dipped into the waters. Older Sikhs also stripped down to boxers and soaked themselves in the waters. It’s a pilgrimage site for many, and a holy site of worship for all.

Lines form for hours to visit inside the temple, but there’s no rush. The hustle of the city is blocked from sound and view, it’s just a quiet place to respectfully view and witness. 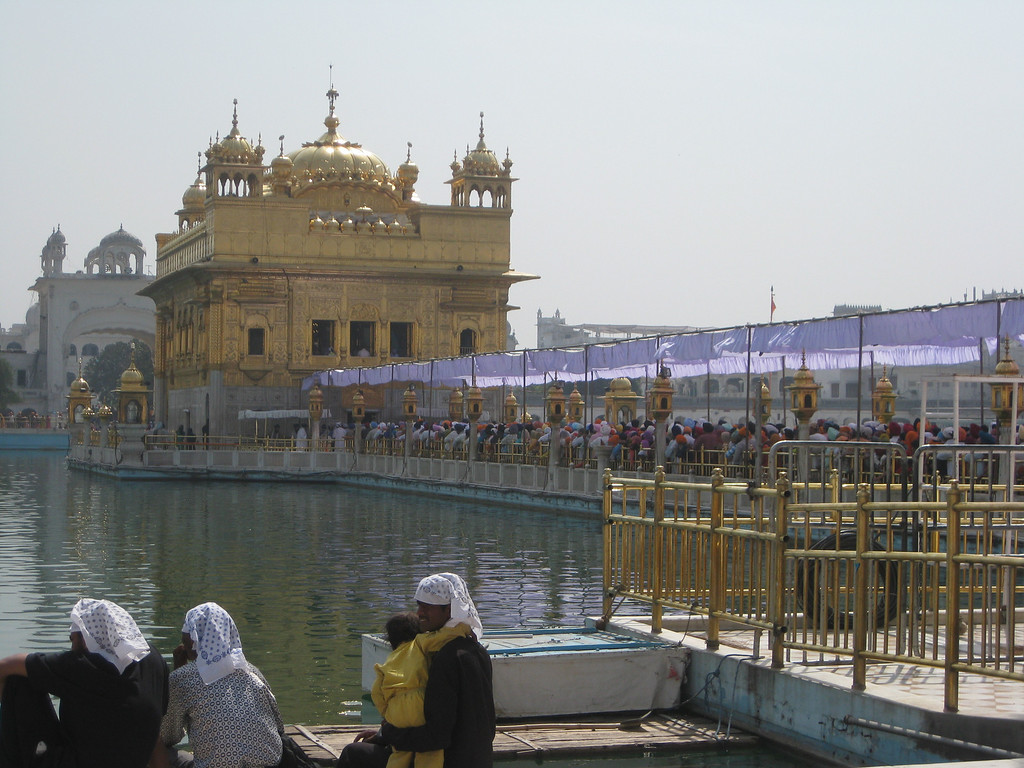 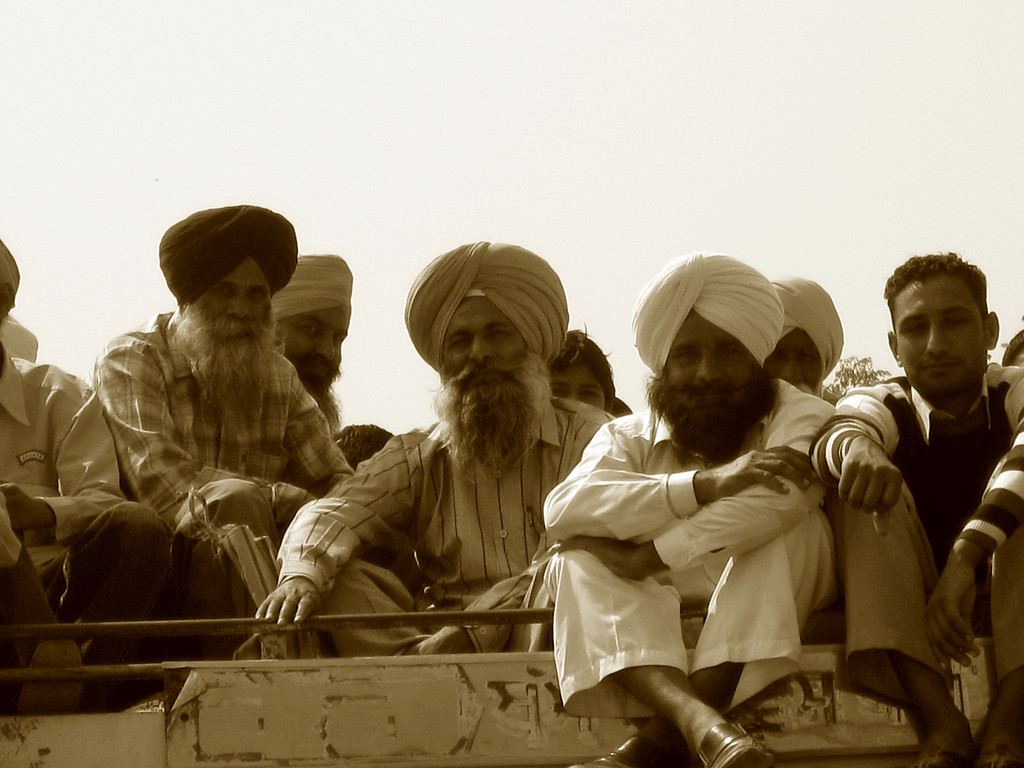 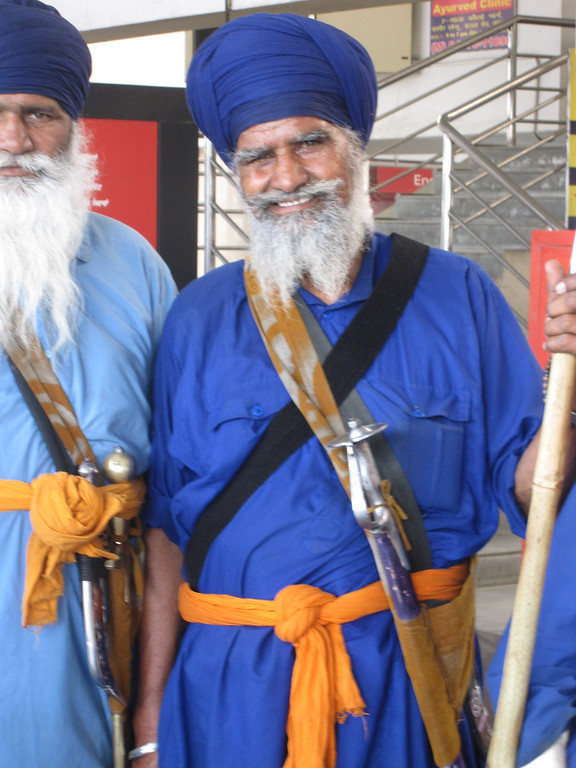 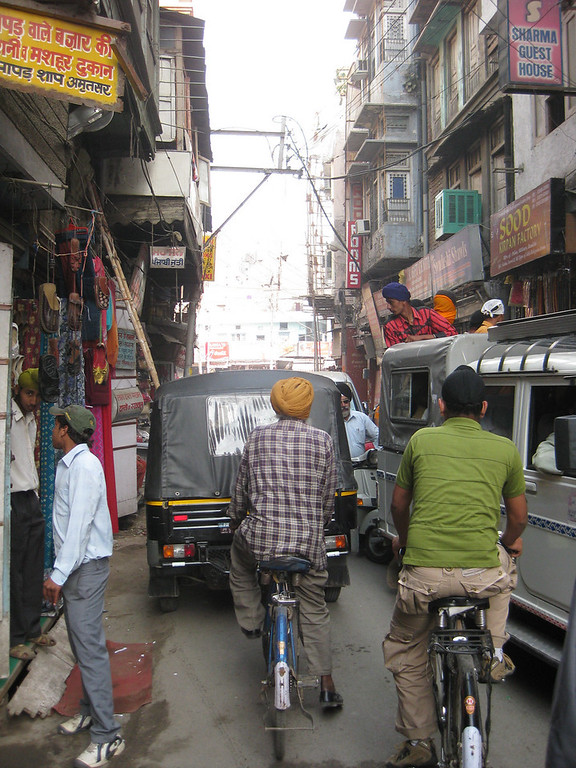 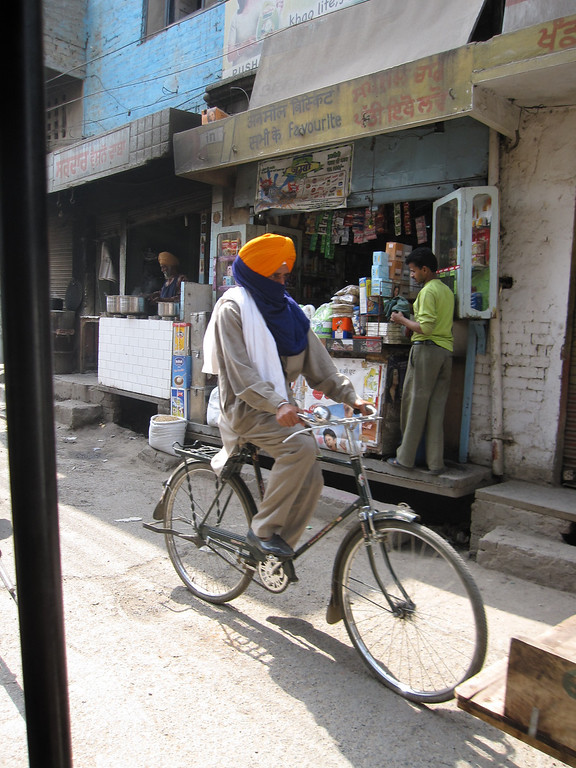 Amritsar was a quick stop on the trip on our way north to Dharamshala. We only took two days to visit the temple and sample the Punjabi food. It was a welcome change from the pace in Rajasthan. I hadn’t yet realized how different I would find the culture, food, and religion in different parts of India. Amritsar is a welcome place to taste the Punjabi food and culture. It’s intriguing to witness how one change — a religion — alters everything from how they worship to how they dress. Everyone, even small children, cover their heads in some fashion. This has spawned an entire line of fashion too as we saw turbans of every color and then found internet and studied how the turban color can change the meaning.

A video from the Golden Temple in Amritsar, India: