As much as I loved Luang Prabang (and that’s lots and lots), it was time to head onward and explore other areas of Laos. We knew that we needed to be at the Thai border in a couple weeks so that we could do the Gibbon Experience in the Bokeo Nature Reserve. But between then and now — might as well get a big off the grid!

Laura and I read through all the town options in our Laos Lonely Planet, and we both decided that a tiny town named Hongsa seemed like the perfect way to see more of Laos, and to also break up the two-day boat ride between Luang Prabang and Huay Xai.

Laos’ major cities are quaintly sweet and comparatively small to the places I whizzed past in parts of Thailand. But even so, the main cities still have the basics of a city anywhere — concrete buildings and bustle. Other travelers spoke of their time hiking through the rural areas and that sounded appealing. I love the attitude of the Laotians, the food, and the people. I want to understand more. 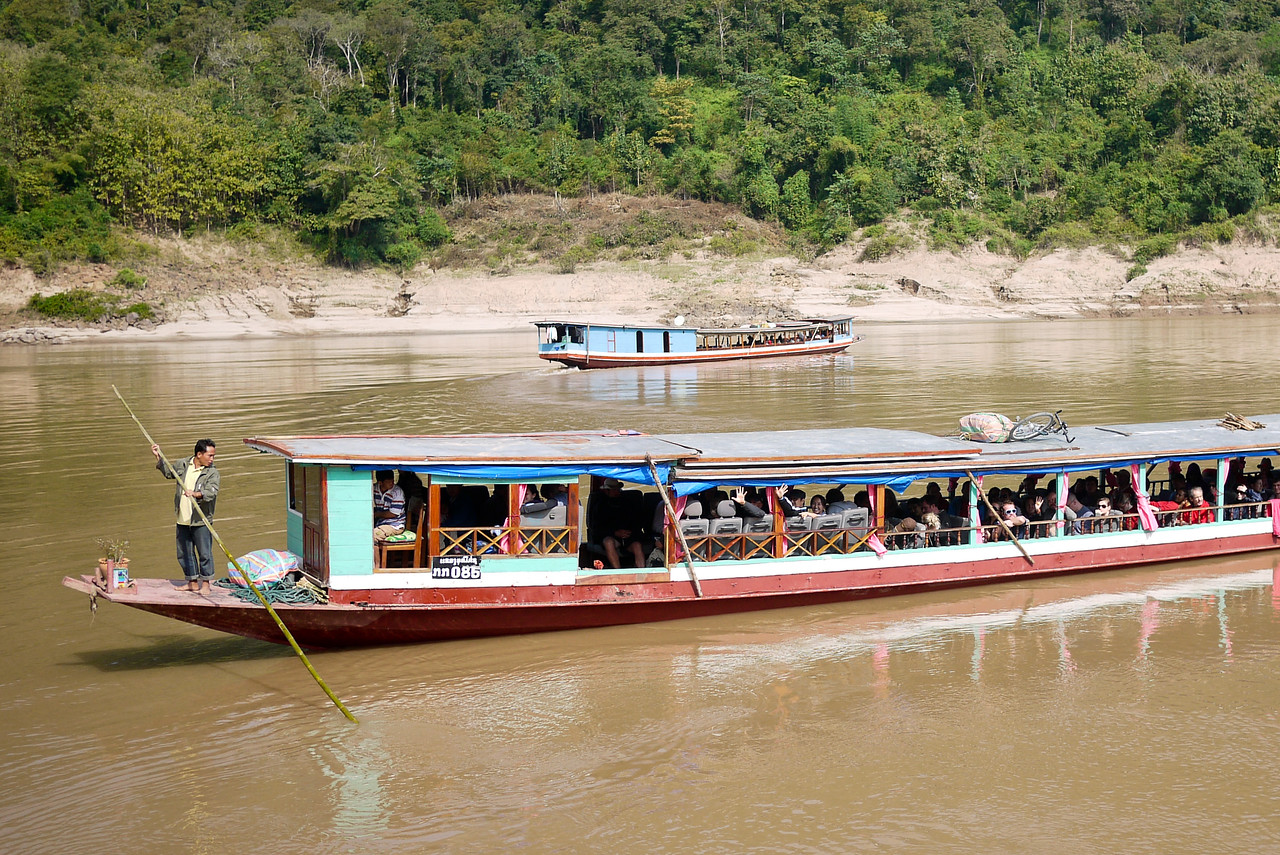 Making Our Way to Hongsa, Laos

After sitting on a church pew for nearly nine hours, Laura and I said goodbye to the slow boat. The boat journeyed onward to Pak Beng, and the next day would stop in Huay Xai. And while we needed to get there eventually, for now we were venturing into unknown areas. The boat dropped us on the side of the river directly onto a huge pile of loose sand. It wasn’t looking promising.

Not deterred, however, we knew there was a way to get to Hongsa from this sand dune. We both hoisted our packs and trudged through the sand to a small gathering of wooden huts, each hut had a sun-bleached thatched roof and no walls. From our guidebook, we knew that we still had to make it up the side of the mountain to a tiny town called Hongsa. Without anyone speaking a lick of English, we took to the age-old gestures. We held out cash and repeated the word “Hongsa” a few times. The locals understood our intent and loaded us into a tuk-tuk with six other locals who had descended from the mountain to trade their goods on the river.

Everyone easily crammed into the back of the tuk-tuk. My overstuffed backpack weighed heavy on my lap. Huge sacks of food and traded goods rested under my feet. We were weighed down and the tuk-tuk struggled to make it out of the sand and onto the raked road. And although I thought we were stuffed to the gills, once we made it onto the road a several other Laotians hopped onto the back of the tuk tuk. A few jumped onto the luggage racks on the roof, and two others hung off the back end. They were going to take our hour-and-a-half ride standing, straddling, and perching themselves on ledges or just hanging on tightly on the roof.

The road to Hongsa winds through the mountains on dusty roads. The drive kicked up huge quantities of dust, so we each pulled out our scarves to project our lungs from the thick, dusty air. All the meanwhile, the tuk tuk careened around switchbacks and dodged oncoming vehicles. Small children played on the side of the road, never concerned with our racing vehicle. And none of this to even cover the countless chickens, cows, road workers, potholes, random debris, and women balancing loaded baskets on their heads. It was a trippy ride. 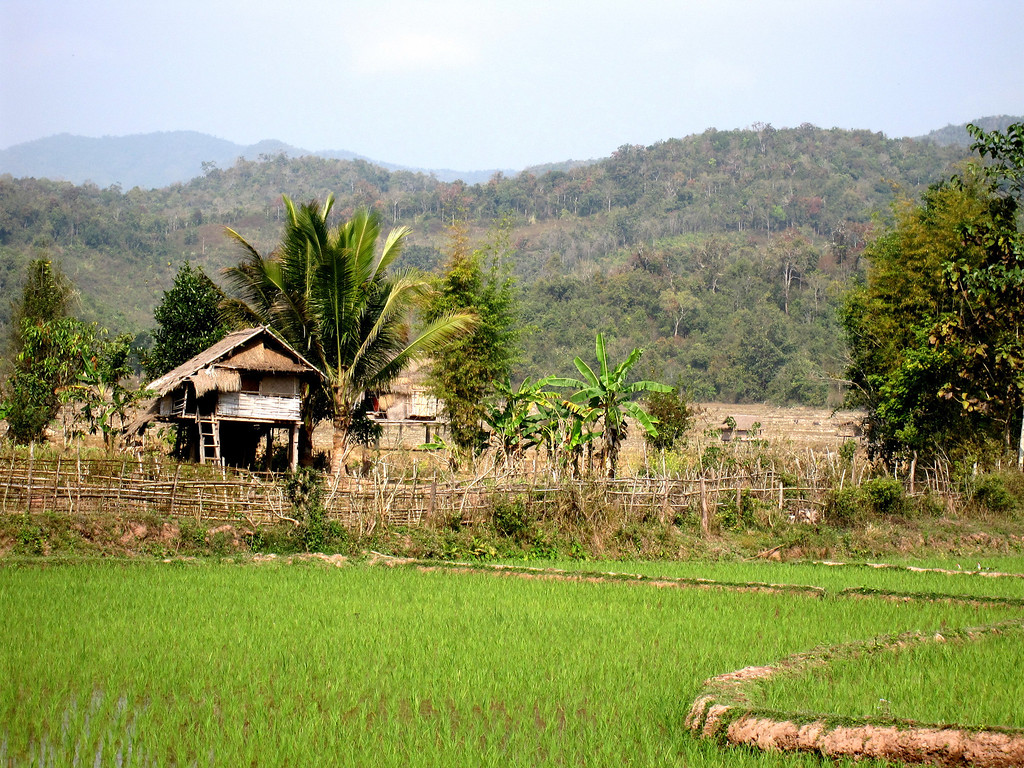 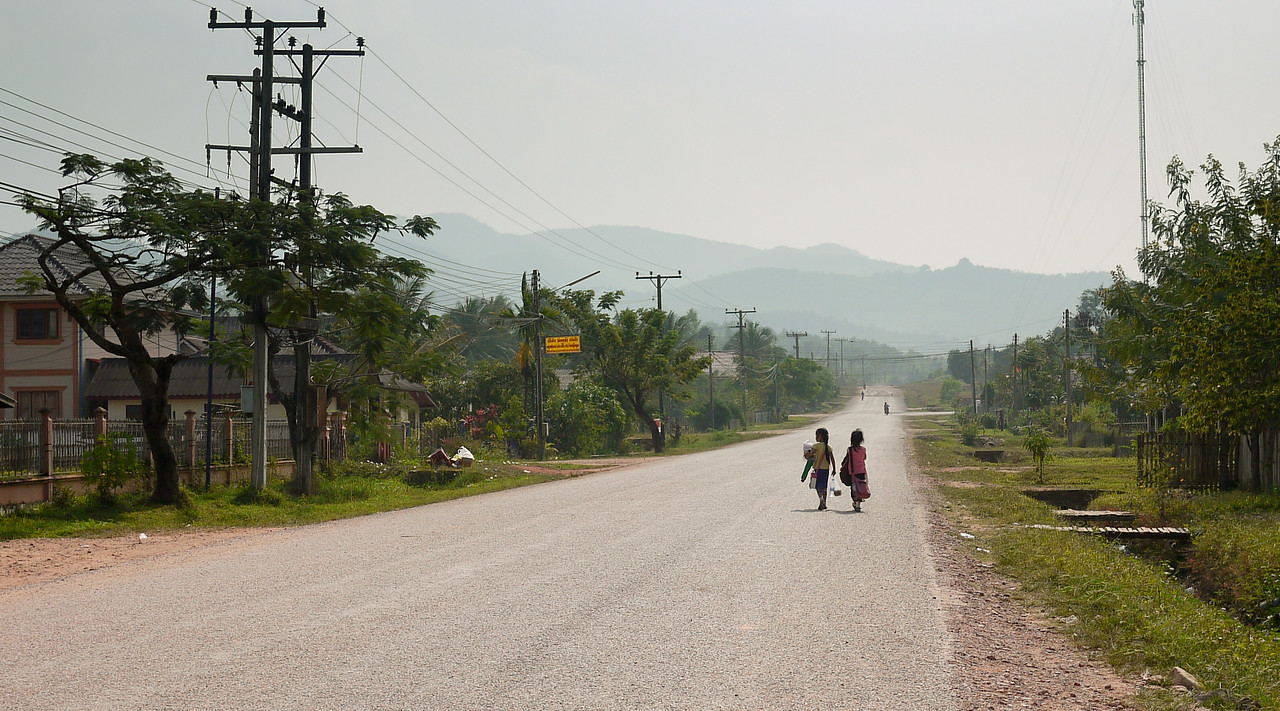 After an hour-and-a-half, we had made it to Hongsa and checked into Jumbo Guesthouse, which is sadly no longer up and running as of 2016. It’s a pity too because it was a special spot. Monica is the Austrian ex-patriot who ran the guesthouse, and she made it a warm and welcoming spot for travelers hoping to learn more about rural Laos.

Monica serves breakfast and dinner for her guests, and whoever is there — it’s always a range of nationalities — gathers around the massive wooden table talking and sharing travel stories. We even hit on the odd philosophical discussions or two as the night wore on.

Our first day in Hongsa, Monica arranged for four of us to ride an elephant through to the outskirts of town. This is one of those grey areas for travelers. And while I know not to ride elephants in Thailand, each place is a different story. These are logging elephants and Monica contended that spending a day with well-paying tourists was more like a break for the elephant — it’s a moral quandary and one that I have contended with since. It’s not as if the elephant would be given a break if we didn’t do the activity. In Thailand, the tourism industry is built around paying tourists, and there are other alternatives like the Elephant Nature Park. But Laos isn’t there yet and it seemed that we could, perhaps, have an elephant experience that also gave the elephant a bit of a break for the day.

And that’s how we met Medoc, a female elephant who had a bit of vacation that day from the hard labor she does in the mountains every day. She took us on a leisurely stroll through dried-out rice paddies and through a bit of the mountain forest. The Asian elephant is endangered because it is a highly prized work-animal in Southeast Asia. It was a special afternoon to meet the elephant up-close-and-personal. The elephant’s gait has a distinct rhythm, and it took me half of the ride to acclimate to the side-to-side ca-lumping sway. Once we got out of town, our elephant handler walked beside. Laura and I took turns petting Medoc’s head and neck as she meandered along the paths. There was no pace we needed to keep and we weren’t in a hurry so she stopped for a bit of a snack from the tree branches nearby. We moseyed for an hour before we made our made back to the guesthouse.

It was an interesting afternoon. I was conflicted before we left, and I am in the wake of it too. The elephant riding industry in Southeast Asia has issues. That said, I do support the elephant rides in Nepal as an integral part of the conservation efforts. Although riding is never the ideal solution, if it’s preserving the animal in another manner, is it all bad? Either way, I spent the day with Medoc and I’m pretty OK with my decision to rent her for the day. She walked back into the mountains with her owner and I can’t help but think that her tomorrow won’t be nearly as relaxing as her today.

The housekeeper’s niece was all hellos and giggles when we returned to the guesthouse. Nan is a lovely 9-year Laotian old girl who was on a break from school for the week. She likes Jumbo Guesthouse because of the attention she gets, and although she was shy with her English, Monica is helping her learn it. Between Nan and all of the puppies, we had a fun afternoon. Trekking into Rural Areas of Laos

On our second day in Hongsa, Monica suggested a trek further into the mountains. I wasn’t feeling very good, but I mustered up the energy for the walk. This area of Laos is home a number of ethnic minority groups and the cultural walk seemed like a one-time chance.

As we walked on the main road out of town, our guide stopped two young women (perhaps 17-years-old) who were hiking home to their rural village. Our guide chatted for a moment with the women, and then he shared their stories. He wanted us to get a feel for their daily lives and to better understand the people we were passing along the roadways. Both women start their day at 4am. Then they hike for two hours into Hongsa to sell their village’s food and goods at Hongsa’s market. Although it’s small to me, Hongsa is actually the largest town in this region and it’s the best opportunity for the remote villages to sell their crops. Once they’ve spent the morning selling, they carry the leftovers on the long hike home again. The women, who had been walking at a clipped speed, paced themselves to our small group of six. As they told us more about their lives, I noticed that the electric poles had stopped running along the roadway and the houses became more scattered. Instead of a town center like Hongsa, the villages were a collection of farms and huts.

Monica had encouraged to bring a few gifts for the rural areas — soaps, toothbrushes, and staples — and our guide found the village chief. We handed them over and learned that this was done to best ensure fair distribution. He would share the items with the families that would most benefit. Laura had carried her small, handmade puppet from the Luang Prabang night market, and the kids were delighted by her impromptu puppet show. I love Laura for that puppet, she had no reservations in trying to bridge communication and just go for it. Even though we knew very little Laotian, her puppet crossed the language barrier and even elicited some laughs (and one mighty guffaw) from the elders in the village.

All told, Hongsa was sweet and just exactly what Laura and I had both been hoping for when we left the slow boat behind. Unfortunately, we had to leave in a hurry since my sickness had taken a turn for the worse, but I won’t hold that against this charming little town.

8 thoughts on “A Little Village… Village Trekking and Elephant Experiences in Hongsa, Laos”