When set off traveling in 2008, I never fathomed what a data hog I would become over the years. I left the US with my trusty (but old) PC laptop and a point and shoot camera. And what’s hilarious to me now, is that I felt like I was overdoing it compared to the romantic round the world journeys a century ago—they sufficed with a journal and a pen on their long overland trips. But I had to travel with my laptop so I could work and blog from the road, and the camera was a given.

Fast forward to now though, and packing heaps of technology when we travel seems par for the course: I think nothing of traveling with my laptop, a smartphone, my Kindle, my nice camera, and a backup hard drive. I read data on our outrageous and upward spiraling demands on data usage recently, and scientists are looking to DNA, bacteria, and diamonds even as an eventual solution to the compounding effect of each person’s growing digital footprint. No faded photos for us, scratched and worn throughout a century,it’s feasible to think my great-grandchildren could read an archived incarnation of this very blog.

Now, one could argue there’s no need to preserve every nuance of my digital life, but today, I do actually need the data I create, and I realized I needed a more effective way to store the heaps of data I produced every week as a long-term traveler—gigs upon gigs of photos, documents, videos, etc.  In my first two years of travel, I sporadically mailed home DVDs filled with my photos and I backed up information locally on a small external hard drive that I bought in Slovenia eight months into my trip. Sadly, just as I was leaving for Central America, I discovered that one my two backup hard drives was corrupted. And because my backup copies were not meticulous, in one moment I had lost all my photographs from my many months in Nepal and India.

The news devastated me. And I learned four important lessons from it:

I haven’t figured out the exact perfect solution to fully storing everything, but between external hard drives, online storage in the Cloud, and remote backups to a home computer, I have the found a workable rhythm and a complete backup system for long-term travelers like me! So let’s look at the highs and lows of each three, as well as why I’ve chosen this exact setup for backing up … each one has specific reasons to be used in tandem with the others.

Backup Online to the Cloud

The best way I’ve upgraded my digital life was through online backup and storage in the Cloud. Most of us use Cloud storage everyday now without even thinking about it. Gmail and Google Documents stores your data in this mysterious “Cloud,” as do photo storage companies like SmugMug, which is where I host all the edited photos for this site—it’s a pretty interface and my preferred choice as a photographer and blogger combo.

But these are both file specific Cloud backups. Full online backup solutions on the other hand, provide complete coverage for laptops and hard drives—they backup every single file on your computer, every single day into the Cloud. 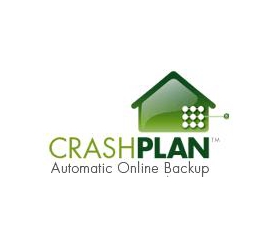 Back in May, CrashPlan approached me to ask if I was interested in testing out their backup services for a year. I was already sold on this type of service, (my friend Jodi bought Mozy backup services when someone stole her laptop and she lost everything), and I was keen to try an easier way than what I was doing—solely backing up files manually.

So I agreed and here we are, six months later. Below I’ll outline the pros and cons of CrashPlan and online Cloud storage, particularly with international travelers in mind.

Because it’s not perfect, but it is pretty close.

Cons to Backing up to the Cloud:

Bonus things I happen to love about CrashPlan is: the user interface (it’s intuitive and simple), customer service is speedy to respond, they have tiered pricing plans (which will come in handy when I pay to renew next summer). And for you Mac users, all the major backup companies work for you guys too.

Also, note upfront that “backing up” and “archiving” do not mean the same thing, CrashPlan backs up the hard drives I have, but if I delete a file, so does it (on a delay though in case you need it!). It’s not data storage per se, the service is made as a fail-safe—if something happens to your hard drive, you can use their mirror image of it to duplicate the information on a new drive. Which is what we’ll get to next, the external hard drives as a second step in the complete traveler back up solution.

Back up on External Hard Drives

As a (mostly) solo traveler, all my data is usually stored in one place: me. Even if I spread out the hard drives and store them in different backpacks/luggage, I am the one carrying all my data on a travel day, which makes the thought of theft daunting. But online backup alone just isn’t enough because most backup services are a duplication of what you have on your computer/hard drives.

That means I still have to keep terabytes of information at my fingertips. So, I carry my laptop as the first storage spot—it has a 450 gig hard drive—and a small external hard drive as my backup. Now, all hard drives can fail (as I found out the hard way), and it’s likely best to have two external ones, but I have found the combination of laptop and external hard drive effective for now since I have amble online and remote storage as well.

Remote Backup to a Home Computer

My dad is a computer systems engineer (official title) and at the core it really just means that he enjoys the geeky side of all things computers. When I left to travel his top concern was a way for me to back up to his home computer remotely. Though this was tricky in my first years of travel, CrashPlan has completely free-to-use remote backup software that allows me to now easily access my dad’s computer network—we have four working computers online and running SETI at all times—so I backup to those hard drives. This is the icing on the cake for me in my quest preserve every single aspect of my digital life since it effectively means all my old files and any new files are easily accessible. :)

There are ways to do remote backups via FTP (my dad’s first method of choice years ago) but software like what CrashPlan offers (again, this service is free) is easier. Much easier. Like Cloud storage though, it requires a strong internet connection. It also requires hard drive space, a computer that is turned on, and it must have the CrashPlan software installed on both ends (yours and the backup computer). It’s easy to set up, but it’s something you should do before you head out on the road (my mother would never have the skills to install it, but any of my friends could do it easily … if that gives you a gauge of the difficulty).

The Trifecta of Storage Near-Perfection

The last year of my digital life has felt the most secure. After I lost my photos in 2010, I saw how tenuously connected we all are to this digital life. I had no negatives in my hands to simply re-print the photos I lost. My story has a surprisingly happy ending, I gave my broken hard drive to my friend Doug who was studying advanced data recovery at University, and after a year testing different programs on my sad little hard drive, he recovered all the data. I did a happy dance of thanks when he emailed me the news. :)

I don’t expect him to create a miracle like that again, however, so I use these three fairly simply methods to ensure that all my work files, my photos, and my documents are secure. The fact that I sometimes have very little access to the internet is the only hitch in this current method—the moment we have global free 3G access I will do a giant happy dance. But since that is decades away from becoming a reality, I will stick with Cloud, external, and remote storage in tandem to keep me traveling.

How do you manage your digital life and data storage?