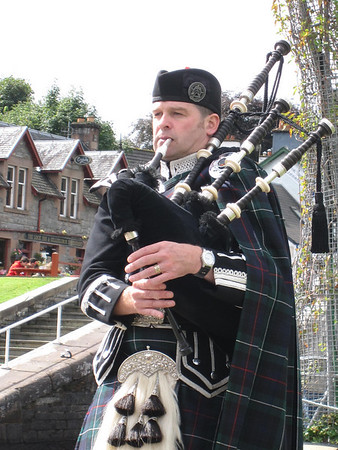 Ice cream dripped down my hand as I made my way to the small Fort Augustus bus stop—I was staring down the barrel of another long and drawn out travel day. I had strapped on both my backpacks, and with 20 minutes to kill before the bus arrived, I made my way to the grassy hill where Spud the Piper piped away to dazzled tourists.

Spud spotted me immediately, finished a tune, and then came over to chat. Since it was instantly obvious I was leaving town, he asked where I was headed next.

I sputtered out a vaguely incomprehensible answer, “Um, a really small town . . . Grey-something. With an “s” in there too . . .”

At his increasingly inquisitive look, I floundered even more for an answer, for the name of this tiny Scottish town where I would head next. I had randomly chose this next town because there was a cheap and well-reviewed hostel, and because it sat at the entrance to the Cairngorms National Park. But it was firmly off-the-beaten-path and I feared he would think me nuts not only for heading there, but for not even remembering where I was going next!

“Near Aviemore!” I exclaimed, the name of a nearby town coming to me as I fumbled to take out my small notebook.

“Yes, precisely!” And then in the way of weird coincidences, Spud tells me that not only does he live in Aviemore, an hour-and-a-half away, but he’s from Grantown-on-Spey and plays the pipes there nightly.

Without pausing he asks, “Do you want a lift there?”

Oh the quandary I now faced. If I was willing to wait two hours then he would drive me to Grantown-on-Spey and actually drop me off at my hostel. Otherwise it was a looong day and multiple buses to reach the small town.

The only obstacle: I don’t believe in hitchhiking. Not even a little.

As a solo female traveler, I think hitching is unnecessarily dangerous and not worth the money saved. I actively tell other women hitting the road that they should be willing to pay more for their safety.

Buuuuut, circumstance also plays a role in any situation. Here were the thoughts racing through my head:

Did I just say that? Crap. We arranged to meet up in a couple of hours by the grocery store-cum-café-cum-restaurant. As I walked away, I tossed my empty ice cream stick into the trash, meandered past the bus stop, and pondered my options.

I had time to take the bus, and I was beginning to convince myself that this change in the plan was a terrible idea—warnings my dad had issued to me for twenty years echoed in my head.

Well, crap. When it came down to it, I was going with my gut instinct.

Two hours later, I dropped my main backpack into the trunk and kept my laptop bag with my passport at my feet . . . I mean, I still had to be cautious, after all.

Spud peeled out of the parking lot and as we cruised past the “Welcome to Fort Augustus” sign,  Spud’s announcement caused my heart to thud in panic.

The town had receded into the distance, when glanced over at me with a mischievous look, “Now, I’m going to tell you something, and I don’t want you to get scared.”

Although we rode at full speed, the doors were still unlocked so I casually crept my head toward the door handle.

Then Spud finished his thought. “This road is small, curvy, and I like to speed.”

Oh my god! I laugh-sighed my relief, and then told him to never say those opening words to a solo, trapped female ever again.

As for the car ride? Oh boy did he speed. We whipped around curves as he candidly told me about his life, and informed me that he was a bit famous in the area (and internationally) because he played the bagpipes for Madonna at her Highland wedding several years earlier (which the internet verifies as true!). 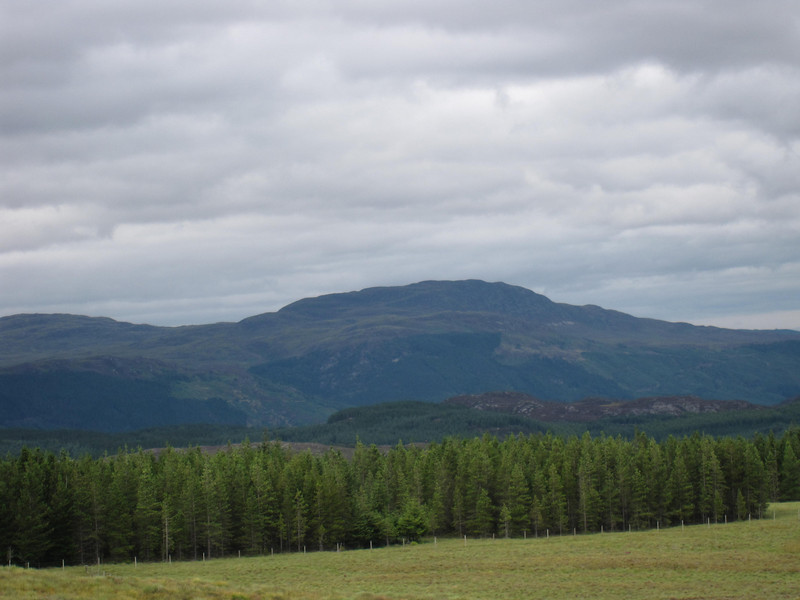 We chatted the time, comparing notes and thoughts on America—because everyone has an opinion on my country. By the time I left his company, I’d had one of my most positive experiences and personal interactions in Scotland. Although there is great natural beauty in this country (the Isle of Skye comes to mind), and so much history (William Wallace in Stirling), it’s getting to know a local’s perspective that made me feel most connected during my Scotland travels.

Spud is a genuinely nice guy and I’m so glad that I went with my gut instinct and accepted his ride. Although I’m still dead-set against hitchhiking solo, I also reinforced my conviction that all rules can be broken at some point, under the right circumstances.

If experiencing new countries is about meeting the locals and having one-on-one personal encounters (which I think they are!) then I couldn’t have made a better choice. So, thank you Spud if you read this, for the ride, for taking me out of my comfort zone and helping me trust my instincts, and for being a really neat guy. :)