Based on the recommendations from other travelers, I’ve planned two weeks in Melbourne. The first week is mostly solo now that my travel friends have left. And the second week is staying with a friend I met through Couchsurfing when I lived in LA. Before I move over to my friend’s house in the Melbourne suburbs, I decided to find a way to see the best sites outside of Melbourne.

Melbourne is set in the middle of a gorgeous part of the country. The natural terrain around the city has rocks, penguins, cliffs, and gorgeous blue ocean. And while there are half a dozen options, I picked the two that looked most interesting: Phillip Island and the Great Ocean Road.

I booked online with Go West, which offers offers two eco-certified day trips around the city. If you’re looking for a tour Go West doesn’t offer, the Ecotourism Australia organization has a comprehensive list of certified tour operations. Since I’m looking at a long year of traveling around the world, and it seems wise to limit my footprint as much as possible. That said, going back I would likely explore other options, or use a private locally owned company like Bush to Open Road Tours. How to Visit the Penguins on Phillip Island

If you have a rental car you could surely visit Phillip Island Nature Park on your own, but it’s also fun with a guide and a day’s worth of other activities. The tour started early and once we were all in the van we began moving west of the city. In addition to visiting Phillip Island, the day tour stops at to see seals in the wild and at a sanctuary for wombats (which are surprisingly adorable. Once at Phillip Island, the sun begins to set and the tourists watch a parade of itty-bitty penguins trek from the ocean to the safety of nearby sand dunes. They need the safety of land and cover from predators, and this spot is one of the most populated areas of Little Penguins.

Little Penguins, also known as blue penguins and fairy penguins, are the smallest penguins in the world. They make quite the sight! Human influence and suburban sprawl has severely impacted the Little Penguin population in Australia. This is one reason the ecotours are preferable. Conservation efforts over the past decade — a network of boardwalks and shuttles —now allows tourists to safely witness the Penguin Parade without severely impacting their way of life.

Each evening, all of the Little Penguins take one last swim for the night. Then, they slip from the ocean and start a perilous journey from the ocean to their tiny holes in the nearby sand dunes. As the sun sets, the light glints off of the penguins and I watched them for an hour as they slowly waddled their way to safety. Because these penguins are only calf high, it takes them at least an hour to make the short journey.

The Nature Park has built a viewing platforms into the boardwalk, so there are some areas to sit and you can also wander the pathways and look at the penguins settling into their holes. Since photos of the parade are forbidden, this is a shot I found online of the cute little buggers.

Exploring the Rocks and Waters of the Nobbies

Once in the Phillip Island Nature Park, we stopped to visit the “Nobbies.” This rocky spot is hugely popular with local seals, which congregate on the cool rocks. Not that I can testify to that first hand! The seals hid from us, and some might have been gone for the afternoon on a fishing trip. We walked for half a mile on the boardwalk around the point and that was still lovely. The seals chose a pretty spot and even without them present, we spent time watching the ocean break on the rocks. The breeze was strong though, so I was bundled against the biting wind coming off of the Southern Ocean.

I was also excited to stop at an animal sanctuary. The sanctuary uses tourist dollars to rehabilitate Australia’s native animals. As a traveler, it was nice to fund the project, but a bonus that I could get up close and personal with the animals. Although I had found kangaroos in the wild near Bateman’s Bay, at the sanctuary I was allowed to snuggle with a wombat!

I don’t remember her name, but she was adorable and cooperative while everyone in the group snapped dozens of pictures. She looks soft, but her prickly fur surprised me. I’ve pet a lot of kangaroos now, and I expected the wombat fur to be of a similar texture. Miss Wombat was nice and a heck of a lot more ladylike than the emus — I did not cuddle with them! The workers warned us that the emus will snatch the entire food container from you if it’s within their reach. That meant we had to feed them from our hands. I was one of the few brave enough to face their lunging enthusiasm. When they spot food, they lunge over the fence with their long necks and thrust their beak into your hand. Then they pinch the food bits without regard for the skin attached to your hand. It’s not painful, but it’s not entirely pleasant either.

In addition to Phillip Island, I had booked a day tour on to the Great Ocean Road. I loved that the company took the extra steps to limit our eco-footprint, so I used Go West to take the much longer day tour of the Great Ocean Road (GOR).  This 800 kilometer journey takes in the most spectacular coastline in Australia. It’s a beautiful section of road and since I didn’t rent a car, I was happy to use a tour company to see the most popular sights. 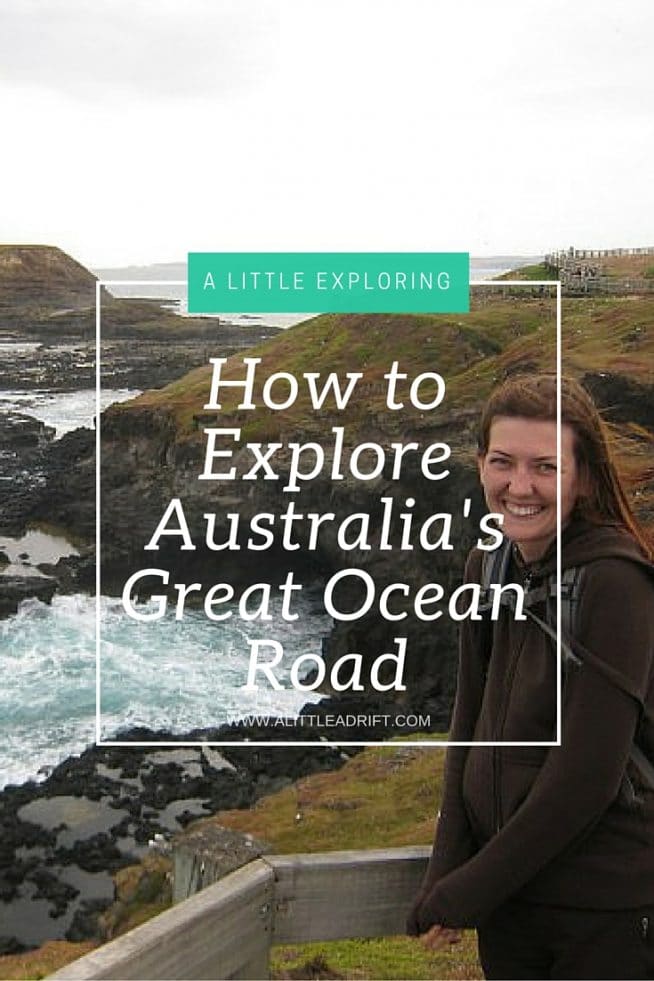 Australia’s Great Ocean Road is one of the most beautiful tracts of coast in Australia. And that is saying a lot, because the country is enormous and there are some gorgeous areas. This road was built to highlight the natural rocks, cliffs, and beaches south of Melbourne. The Pacific Coast Highway in California was the inspiration for this road, and now that I’ve driven both, I can attest that they are both stunning.

If you’ve seen the movie Point Break, you may recall scenes on the beaches along the Great Ocean Road. Hollywood, however, filmed those scenes in Utah to save costs. So, if you’ve always wanted to see the GOR, it’s even prettier in person than what you might have seen on film. Let’s look at the highlights reel of the best sights.

The two most popular sites on the road are the 12 Apostles and the London Bridge. The 12 Apostles, located in Port Campbell National Park, stand as orange limestone sentinels just off the park’s coastline. Only eight of the 12 Apostles still stand since they continually battered and eroded by waves, winds, and currents. In addition to the slow toll of the ocean against the soft limestone stacks, big storms cause these magnificent towers to crumble and topple into the ocean.

Even with some towers fallen, it’s a beautiful sight and I feel lucky and grateful that I have the opportunity to see this spectacular road now, rather than twenty years down the line when more of the scenery will have eroded and changed.

The London Bridge is another of the postcard ready spots along the coast. Below, the picture within the picture shows what the bridge used to look like compared to what it looks like now. One of the bridge’s arches collapsed a while back. Another interesting tidbit — the arch collapsed days after BMW filmed a commercial on the London bridge. Most people agree that the weight of the cars caused the collapse. Though it was bound to happen at some point, it’s also sad how profoundly humans can impact the natural course of things. And my favorite spot on the Great Ocean Road is Loch Ard Gorge. It’s truly a stunning slice of tranquility and heaven. My photos cannot do it justice. Once we descended into the Gorge, the waves rushed in and out of the narrow opening and our tour group took an hour to wander and relax. Even with the break, I would have loved to stay for longer. If you’re taking a tour, or if you’re exploring on your own, I highly recommend that you visit these three spots. There are a ton of gorgeous points along the road — it’s a constant stream of beautiful coastal views — but these three spots stand out as special.

Once we returned to Melbourne, our day on the Great Ocean Road clocked in at 16 hours total. And while that’s a whole lotta sittin’ on a bus, I’m don’t regret it for a second. It would have been a bit lonelier if I had rented a car and visited myself, and I am glad that I headed out into nature for the day. How: If you’re in a group, consider renting a car and driving it together. I recommend making it at least two days. There are plenty of hotels to stay along the way and it’s a much more pleasurable trip if you break up the long drive. If you’re traveling solo like I did, consider using Go West, they worked on my backpacker budget. If they don’t have a tour that fits what you need, the EcoTourism Australia site has a list of sustainable tour operators. And Bush to Ocean Road Tours is also a good choice; the company is locally owned and operated and offers that personalized feel that makes a trip more memorable.

When: The road is beautiful year-round, but it’s particularly nice in the Aussie summer months. It’s never truly hot on the Great Ocean Road on account of the breezes coming from the Southern Ocean. For that reason, it’s downright cold in the winter. But again, it’s never a bad time to visit.

If you’re traveling through other parts of the country, consider using my Australia travel guide to explore more tips and advice!