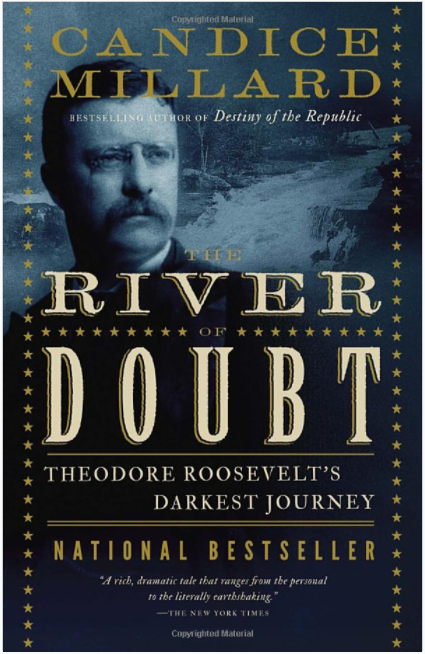 As part of my 52 books challenge last year, I aimed to read a book a week throughout the year. While I ultimately failed (I was about 10 books shy of my goal), I did read interesting stories I might never have otherwise discovered. When I visited a friend in Australia last fall, I perused her bookshelf in search of a title I might never have thought of reading. That’s when I found  River of Doubt: Theodore Roosevelt’s Darkest Journey by Candice Millard. Having little knowledge of Roosevelt’s life, I wasn’t even sure what the title could reference.

Turns out the 26th president of the United States had quite the adventurous spirit. After a humiliating failed bid a reelection in 1912, Roosevelt and his family set off for South America to take a leisurely trip down one of the Amazon’s larger and better-known rivers. Instead, Roosevelt, his son, and a team took a harrowing journey down an uncharted and dangerous river in the Brazilian Amazon known then only as the River of Doubt.

The book serves as a biographical portrait of the former president, while more closely falling into the realm of adventure narrative and thriller. Roosevelt is undoubtedly one of the most famous presidents of the 20th century and he was such a rugged outdoorsman that he was able to leave the presidency and come out alive on the other side of a trip of this magnitude. What’s more, the book opens a window into Roosevelt’s love for nature and why he felt natural spaces were so important. His presidency left such a lasting impact on the U.S. National Parks system and Millard’s book deep-dives into the events in his life that fostered his great love of the outdoors.

The story itself is fast-paced and beautifully done. I still haven’t visited South America, and Millard paints a striking image of what it’s like to sleep under the stars in one of the most remote places on Earth. River of Doubt is reads like fiction and I read it in two sittings (and it’s not a short book). It’s a fun read, which is rare for a presidential biography (and this teeters on that line, giving a lot of backstory and history on Roosevelt, although it rarely delves into politics). I highly recommend the book; while not modern travel fiction, it’s just enjoyable.

You can find River of Doubt on Amazon.

Read my past travel book reviews, or browse my selection of the best books about countries around the world. And read my reviews policy and disclaimer.