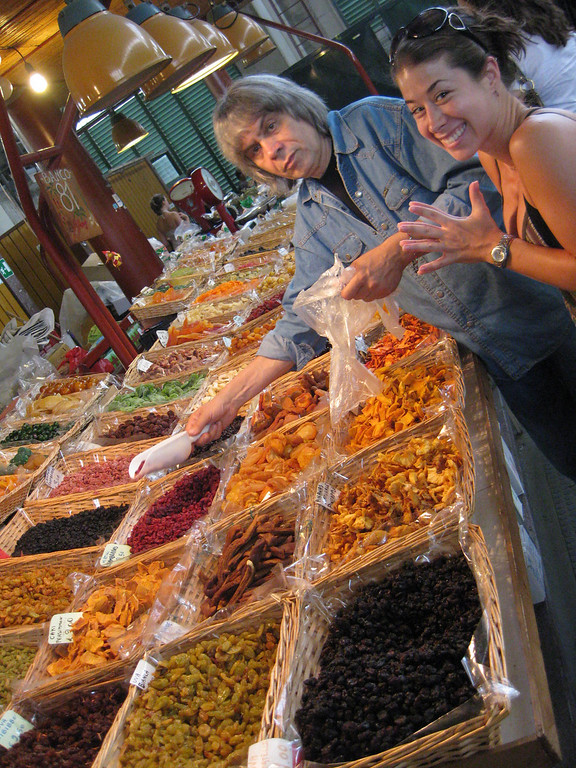 Florence is an amazing city filled with beautiful art and history. The first time I visited Italy, I had missed the chance to visit Florence and always regretted it. This time, it lived up to my expectations once I arrived! My cousin, bestie, and I had planned an adventure-filled few days in Florence, packing in as many activities as possible. We had wandered the museums in search of Renaissance masterpieces, we photographed the beautiful Boboli Gardens, and even spent a beautiful day biking around Tuscany in search of tasty wine. The only thing we hadn’t done was a ladies night!

Jenn had joined the trip fresh from home, but Helen and I had spent many months in developing regions of the world, which isn’t always luxurious. So, we gratefully and humbly requested of Jenn a girls night on the town. Of the several nights we stayed in Florence, we sampled the local markets and cooked up a storm in our own hostel kitchen, making delicious meals with the local ingredients from Florence’s Central Market (they also had an amazing dried fruit vendor). With each meal, we selected and worked our way through the flavorful local wines.

It was a great routine that worked while we explore Florence on a budget. But as our days dwindled, we wanted to splurge on a nice evening out on the town. Jenn prodded me into buying a new dress at H&M  because she feared that I was going to wear my dressy kurtah, which I was. With a new dress though, it called for getting fancy with make up and everything.

It was a windy evening, so we did a not-very-classy shuffle-walk while clutching our dresses. Finally after 20 minutes we had made it into the center of Florence, and began searching for a nice restaurant where we could enjoy our last evening in a big city. Jenn ranks restaurants by the presence of cloth-napkins, and by those standards we had failed. The rains had started and we scurried into the closest restaurant, but it turned out lovely. We snagged a spot near a window and could people-watch while enjoying the nice meal.

A shared bottle of wine later, and we were all content with our tasty dishes and ready to mingle with the moonlit crowds strolling the Arno River. The rains had cooled the evening and we took a lovely walk across the Ponte Vecchio bridge, too. 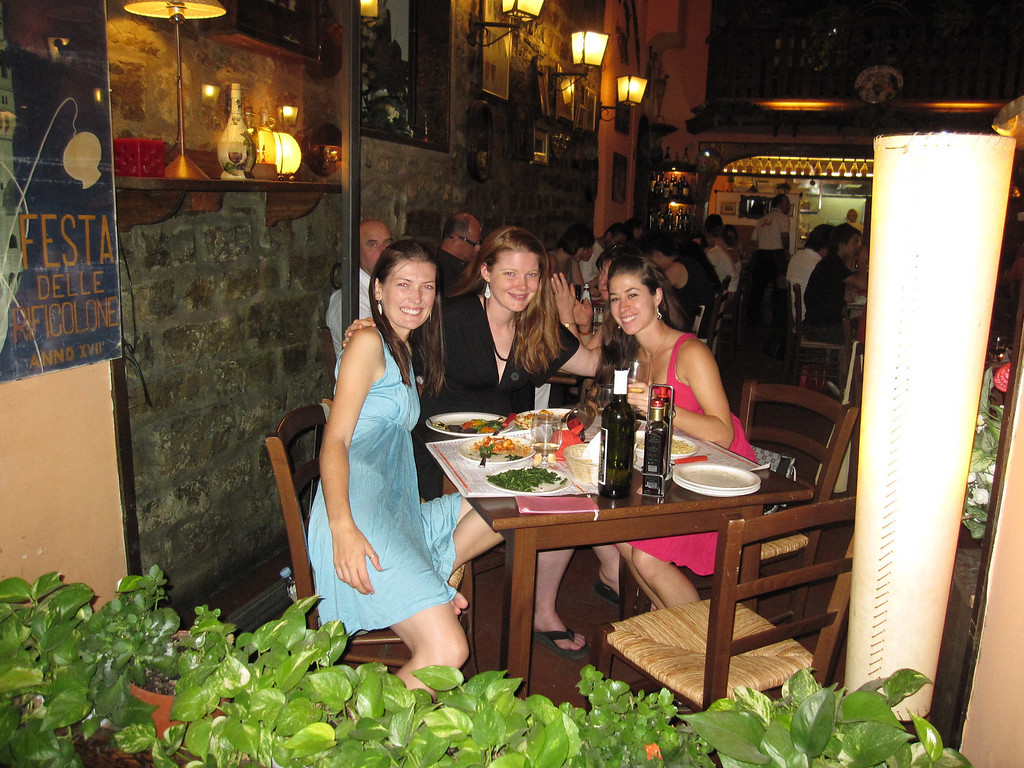 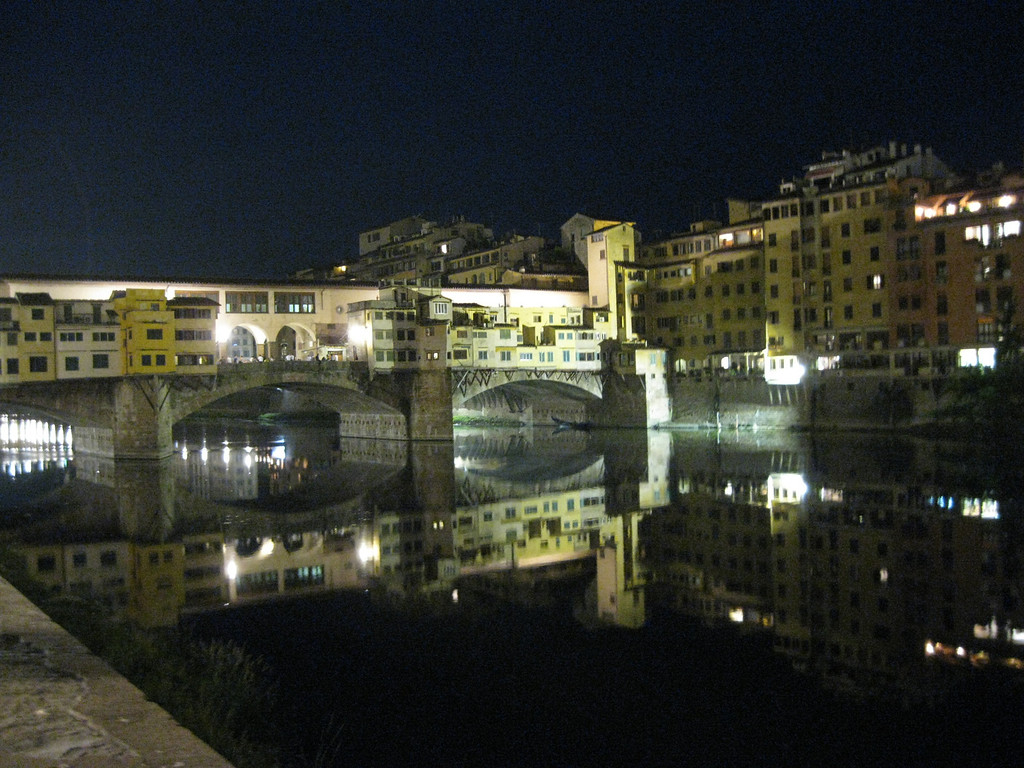 We also couldn’t resist a mini photo shoot along the way when we walked past a block of funky mannequins: 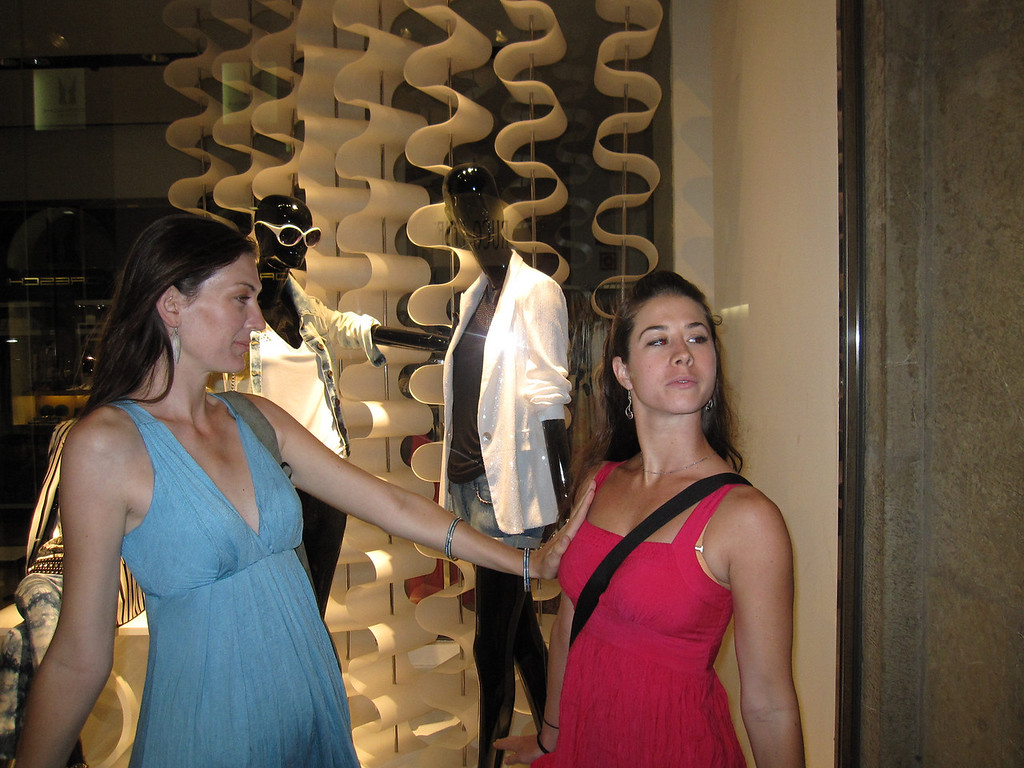 Ponte Vecchio is suffused with romance in the evenings. Local street artists playing heartbreaking love songs on their violins. Couples stroll hand-in-hand with gelato and besotted smiles. It was spectacularly pretty, and only a touch depressing since we were all single, so we continued a slow wander just to see Florence at night.

On the way back, we found a gelatería — it’s never too hard to find one — and this is where it the evening took a funny turn. The three of us perused the gelato cases, and Jenn made up her mind first. She loves apple flavored gelato and ordered a small, two-flavor cup for Euro 4. That’s a bit pricey for a gelato! But, thinking nothing of it, I indicate that I want the same size as Jenn’s and I pick out my flavors. Then, before I can stop her, the woman plops a sugared waffle chunk into the cup.

Five euros?! OK, that small piece of waffle costs Euro 1? Fine. What choice do I have? But five Euros is definitely pricey for a tiny cup of gelato.

My cousin had just picked out her flavors with another woman, and before I could issue a warning, the woman plopped a waffle on hers as well.

My cousin, who had already taken a bit of her trio of creamy deliciousness, choked on that announcement. Jenn and I stood there with mouths agape. Nine euros. That’s nearly US $14! We are budget backpackers and a $14 ice cream was definitely not in the plans when we set out in the evening.

We had no other choice but to pay and laugh about it. For the rest of the night, Jenn and I gently poked fun at my cousin for accidentally ordering the nine euro gelato. To her credit, she ate and enjoyed every single drop of it!