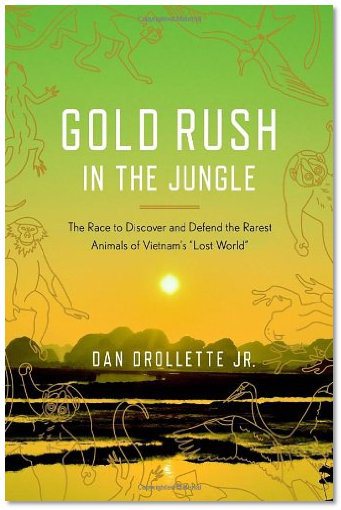 Gold Rush in the Jungle is not a book I would have normally picked out from the bookstore; though I care about sustainable tourism, conservation work, and that side of travel, it just wouldn’t occur to me that a narrative on conservation work would be interesting.

The book billed itself as a journey into one of the last wild places on earth, and it really was all that. I finished the book in record time because I was really keen to follow the conservation work being done in some of the most remote areas of Vietnam, and more than that the story of the people and history that have shaped Vietnam into what it is today.

More than anything this book was readable.

He tempers his scientific background with a strong grasp of storytelling and wrote a book that makes a poetic case for conservation in an appealing way that doesn’t shove an agenda, but rather outlines a lot of the really amazing work being done right now. And the heartbreak of extinction. And those animals on the brink.

You know, I had no idea that conservationists discovered several large mammal species in the past decade alone (and here are 15 species discovered in 2012 alone). We’re talking large animals never before documented by science because they lived in no-man’s-land on the edges of Vietnam, Laos, and Cambodia. Ironically, because this region’s history of war and fighting, uncertain politics, and a lack of technological developments for a long time, the remote areas of Vietnam’s wilderness flourished. In the past 20 years, however, animals are facing new threats as population growth moves into the more remote areas and as the international black market deals in these rare animals.

And thus you have the plot of this book—conservationists working in the region to protect critically endangered animals, many of which we still haven’t discovered. The author weaves his travels into the story as he visits the conservation efforts in Vietnam, Hawaii, Europe, and really all over the world to interview other researches and leading conservation programs.

It’s not a light beach read, but if you’re up for a blend of travel narrative with conservation work, it’s well-done in this book. Read some of the other reviews of Gold Rush in the Jungle on Amazon.

I offered a free copy of Gold Rush in the Jungle to newsletter subscribers and readers.

That’s it, no other obstacles to jump through, though if you’re keen to go like the ALA Facebook page I wouldn’t stop you. :)

Read my reviews policy and disclaimer or my other book reviews. And here I list the best travel books for every country around the world.

7 thoughts on “Travel Book Review: Gold Rush in the Jungle by Dan Drollette”